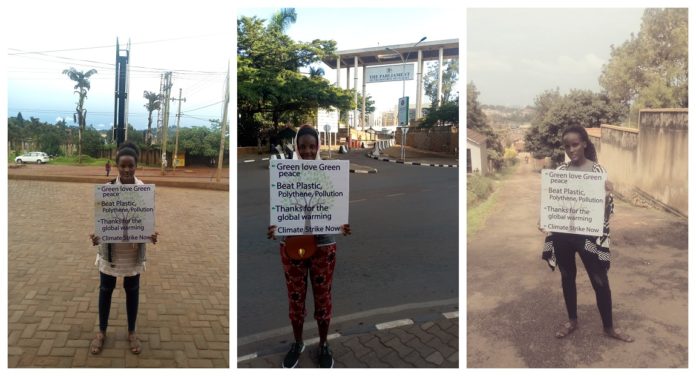 Young people all over the world have been raising their voices around the growing climate crisis facing the world. Inspired by Swedish teenager Greta Thunberg, young people have organised locally, and globally to raise awareness. In Uganda, 22-year-old Vanessa Nakate has taken on an environmental cause she says the world is ignoring: the Congo Rainforest.

Speaking to The Daily Vox from Uganda over the phone, Nakate explained why she is passionate about the Congo Rainforest and climate change. Nakate said that last year during the free time she had before graduation she used that time to think about what she could that would cause a change in the lives of the people in her community and country.

“I started trying out research on all the various problems that people face in our community, and I realised that the climate crisis was the biggest threat to the people. It was not handled in a way that it should have and it was not portrayed as the threat that it is. So I thought this is what I had to do to fight for a better future for my country,” she said.

“When the farms are destroyed by the floods and heavy rains, the agricultural production is affected by the heavy rains. Therefore, this leads to an increase in food prices, leaving out the less privileged people because not everyone is able to afford food. When it comes to the drought seasons, our lack of rain basically means hunger. Because when there is no rain that means there is no food and only the rich can survive,” said Nakate.

Nakate added that when she began this work she didn’t realise her work would go beyond her country and would be for the entire world.

During her work, Nakate researched what was climate change and how it was affecting the community. She had to do extensive research because climate change was not a topic that was being taught in schools as a reality. It was only taught as a theory she said.

While doing the research, Nakate discovered the school climate strikes. These were started by Thunberg in Sweden and then went around the world. Young people left their schools on Fridays and demanded action from their governments and other decision-making bodies. This culminated in the global climate strikes that took place in September 2019.

“It was something new and I figured it would be a great way of demanding climate action from government leaders. I started my strikes in January so I’ve been striking for 43 weeks now,” said Nakate.

With regard to the weekly strikes, Nakate says most people in Uganda do the strikes alone. In Uganda, people who protest in large groups are at risk of being arrested said Nakate adding that this has limited the numbers. Within the government, even though climate change is spoken about a little, Nakate says it is not considered a threat.

“Yes, we have all these environmental groups, but all they do is say let’s plant trees. It’s more of creating awareness of keeping the environment clean and healthy. But they don’t really address the climate issue as a threat. Up to now, no African country has declared climate change an emergency,” she said.

For the past few weeks, Nakate has taken on a new localised cause to raise awareness about it. “But recently, I started another strike. It’s not a weekly strike. It’s a daily strike for the Congo Rainforest,” she said.

The forest is shrinking fast. According to reports, the Congo forest has lost almost 6% of its land between 2001 and 2018. Just like the fires that raged across the Amazon, similar fires took place in the Congo. Many of the biodiversity in the area is being lost.

Nakate said: “It is important for us to fight for this [The Congo] first because 90 million people live in this region and they’re dependent on this forest. We need to fight for the indigenous people of the Congo rainforest.”

Nakate stressed that it’s important to raise awareness about the Congo in the spirit of creating a fair and just climate action. “We can’t let Africa be left behind, because the Congo rainforest plays a crucial role in the absorption of carbon dioxide and production of oxygen. That is good for wildlife and for us as people,” she said.

Despite the lack of support for the government and even the media, Nakate is determined to continue raising awareness about the Congo rainforest.

She says that climate change is an issue for all people because “climate change is real and dangerous for us all.” For young people in Uganda, she has a special message: “This should matter to us the most because it is our future that is at stake. The youth should raise up and demand what rightfully belongs to them, from the government leaders and from the older generation.”

Nakate also wants to hold the older generation account because she says: “They put us into this mess. The least they can do for us is to help us get out of this mess.”

“I’m certain that in the constitution of every country citizens have a right to a healthy environment. And that is what the government leaders should do: make sure that we have a healthy environment because we have a right to it, or else we’ll hold them accountable. We’re tired of seeing people die and suffering. It’s time for Africa to wake up. For Africans to wake up. For African leaders to wake up and take climate action,” she said.