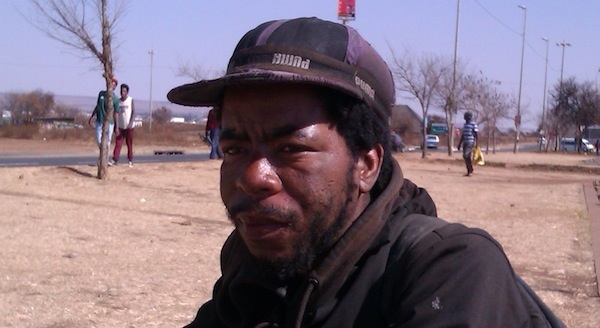 Jabulani Shabalala (33) from Phiri in Soweto is battling an addiction to nyaope. He told BHEKI SIMELANE about his struggle.

I can tell you that Iâ€™m a hard worker, that even my neighbors like me because of that. But they do not trust me because I use nyaope. My problems started when I left my job. Itâ€™s never easy for me to talk about how I lost my job because people simply judge me as being lazy.

I was working at SARS in Randburg as a cleaner and I had never smoked nyaope. One morning, as I left the gate to my place for work I felt an unbearable itch all over my body, as if something was taking over my body. It was worse when I got to the train station and I was running very late by that time, so I decided to go back home.

The next day my body was still very itchy. I wanted to go to work but I just felt very discouraged. I canâ€™t explain it but it obviously had something do with what Iâ€™d experienced at the gate the previous morning. My employers kept calling me pleading with me to return to work but I just told them I would come the next day. Something kept depressing my desire to go to work. They called several more times but eventually they gave up. I had been working at SARS for two years until then.

I started using nyaope after losing my job just to pass time but I got hooked. I spend R60 on the drug per day… Â a portion costs R30 and usually I need two portions each day. I make the money I use to buy the drug from selling scrap metal, copper and plastic bottles at the local scrapyards. From the stuff I have collected now I will get around R35 and I will use R30 for nyaope. The rest, about R5, I will use to buy something to eat. I cannot buy food from the R35 because I need to smoke first and maybe after smoking I will think of something to eat. Itâ€™s like nyaope helps me get past each day. I have to secure money for the drug each morning before I do anything else or even think about proper food, which I never really get to enjoy. My everyday meal isÂ vetkoekÂ which I buy with whatever change Iâ€™m left with after buying nyaope. My mother lives in Mayfair and my father passed away in 2011. My mom showed a lot of concern about my situation in the past. She even tried to get people fromÂ 3rdÂ DegreeÂ to help but I never really got to meet them. She seemed to have given up on me after that. I havenâ€™t heard from her in a very long time. She has no way of getting into contact with me now because I have no phone. Even if I were to die, Iâ€™m sure she wouldnâ€™t immediately know about it and that gives me sleepless nights. My home is in Phiri, Soweto but I had to leave home after I lost my job and had a falling-out with my family there.

I had a girlfriend. After I lost my job I asked her to go home to her family home in Mofolo North, as I couldnâ€™t take care of her and our 16-month-old son any more. I havenâ€™t seen my baby since because of the kind of life Iâ€™m living now. Iâ€™m collecting scrap and always dirty but that doesnâ€™t mean that I have a mental problem or anything like that.

I cannot be clean because I make a living by collecting stuff in dumps. I want to quit nyaope but Iâ€™m struggling to do so. Just this morning there were neighbors at my place who told me they were looking for stuff that had been stolen from their houses. It pains me to be suspected of theft because I donâ€™t steal. I got rid of them because the neighbours were always accusing them of stealing this or that, and I didnâ€™t want them to get me into trouble.

I have given up all hope of finding a job now. I realize that my situation has deteriorated badly. I just comfort myself with prayer. In the absence of immediate answers I always turn to nyaope. If you have the means, my brother, please ask the government to provide young people with work, especially township youth.

– As told to Bheki Simelane