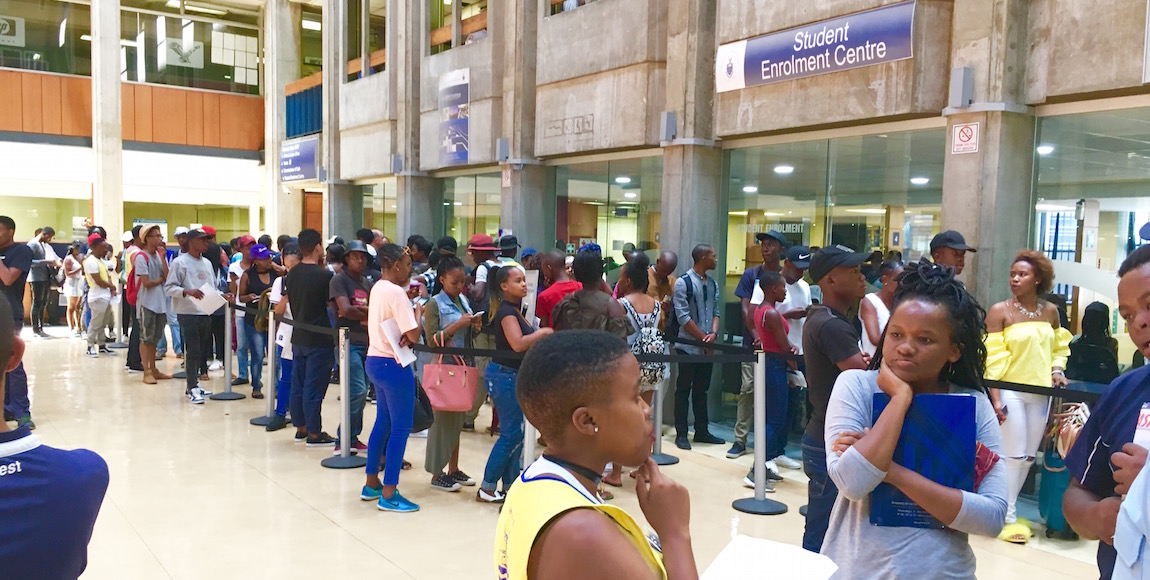 Monday was the first day of registration at the University of Witwatersrand, and it proceeded smoothly despite concerns that disruptions, intense crowds or stampedes might take place. The university put in place a facility separate to the registration area where late applicants and learners who did not qualify can be redirected and advised on their options outside of Wits.

Last month, the Economic Freedom Fighters leader Julius Malema calledÂ for all matriculants to report to academic institutions in order to apply which had not previously been affordable to most. This followed the announcement by President Jacob Zuma that higher education would be freeÂ for families earning less than R350 000 a year.

Universities South Africa warned that universities would not accept â€œwalk-inâ€ applications and that Malemaâ€™s statement was reckless.

At Wits, the first day of registration went by without incident. Prospective students queued in Solomon Mahlangu Hall to hand in their final matric results, check on their applications and confirm their placement. Around 50 people were queuing at a given time, with the people at the front of the line reporting that theyâ€™d waited around 20 minutes in total.

â€œThere are a lot of people assisting first-years and coordinating so that we and our families know where to go and what we need. The students in yellow bibs have been very accommodating,â€ said Keletso Mofokeng, a prospective geological sciences student.

Nosopho Nkosi, a prospective BA Law student, said that sheâ€™d applied in May but was still on the waiting list. She is among the 56 901 who applied to Wits for first-year in 2018. Wits currently hasÂ capacity for only 5664 first years.

â€œItâ€™s really frustrating waiting at home for a response, I know Iâ€™m one of the many who applied but the uncertainty of knowing whether I got in is a lot. I know UJ also didnâ€™t allow walk-in applications, but if we canâ€™t physically go there itâ€™s hard to know what the situation is,â€ she said.

For students who were unable to secure a place at Wits, the university has put in place a facility to help give advice to students on their options outside of Wits. The facility works in connection with the Central Applications Clearing House (CACH), which records prospective studentsâ€™ information and submits it to relevant universities. If places are available and applicants meet the requirements, institutions will contact students to offer them places.

The Â CACH facility is co-ordinated by Wits. The coordinators said they had dealt with hundreds of students during the day, particularly walk-in late applications, people who did not qualify at Wits and those who needed advice on other universities that may be able to take them.

SRC spokesperson and member of EFF Student Command, Sandla Mtotywa, said that the SRC had very little faith in the CACH system and that he felt it was Witsâ€™ attempt to offset the tide of students looking for a place at Wits.

â€œProspective students are going there with high hopes after being rejected by Wits. They hope that by putting their name on that database a university or TVET college will call them back with a place – but the reality is that almost all of them wonâ€™t get a call. Wits is just redirecting the problem,â€ said Mtotywa.

Mtotywa said he believed Wits was reacting to Malemaâ€™s calls to make universities increase their capacity and take in more students, but was unsure of whether in the coming days there would be any tensions due to students looking for entrance. Malema in turn recently statedÂ that he would personally stage a walk-in at Wits to register for his Masters – a seeming provocation to prospective students that they ought to push for entrance despite universities calling for no walk-in applications.