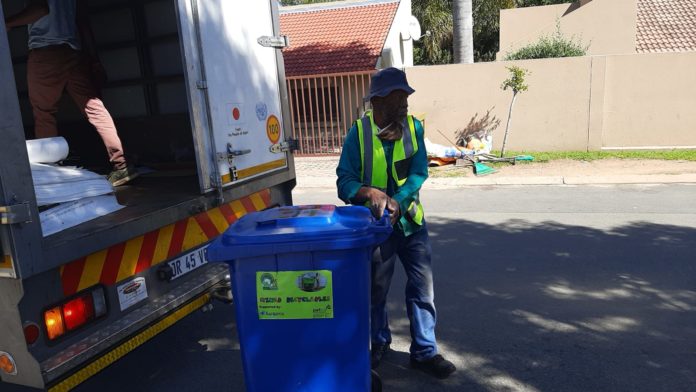 Stop looking for work, says Luyanda Hlatshwayo. There are no jobs: instead, we should create our own. As a reclaimer, he’s put his money where his mouth is. Reclaimers like Luyanda collect waste, creating employment with an environmentally-conscious approach. They earn their living on a day-to-day basis, separating recyclables from waste; they also account for between 80 and 90% of all consumer packaging collected in South Africa. We spoke to Luyanda, who helped to establish a group called, African Reclaimers, about his work and future ambitions.

Where did this all start for you?

I started reclaiming in 2012. It was humbling finding myself unemployed, and having to find alternatives. Your dignity gets affected so much, and it is like you just give up. In 2017 the City of Johannesburg announced the Separation @ Source Programme. It was this really beautiful initiative coming with the Expanded Public Works Programme (EPWP) that promised jobs, and you could become a service provider for collecting recyclables. Corporates would get support like trucks, bailing machines, land, and proper equipment to do collections for the city. The bad implication was that it negatively impacted the current system; which is informal. We found ourselves fighting with (the Johannesburg Metro Police Department) JMPD, which was confiscating materials. All of a sudden we couldn’t access locations. Big corporates with government support had exclusive rights to pick up. We started organising with guys from the landfill, and reclaimers on the streets. We had our first march against the city in September that same year. Through that march we were able to be recognised as reclaimers, and stand up for what we are doing. We have some reclaimers who have been doing this since 1994. We found it important to organise ourselves. It is still an uphill battle, the city wants to charge households for the work we are doing now too.

Is this all still informal?

During all of this a NGO called WIEGO, an international organisation that works with informal workers all the time, assisted us to organise ourselves properly. It is very democratic and we feel seen. It centralises operations and is set up in such a way that we can help anyone who wants to be a reclaimer in a very fast way. It is five years later and we are still here and engaging with all the game players in the reclaiming industry, like the bottling companies. It took a long time, but we are in the position to negotiate pricing on the recyclables. We have autonomy and we are the primary providers of the raw materials in the industry. I call the guys at the landfill “the last line of defence”. We are still informal, with some formal structuring. We are engaging with the Department of Environmental Affairs directly to integrate as the informal sector into the formal sector – we need to earn a service fee. We have to pay a plastic levy; this way the plastic doesn’t go to landfills directly. We are asking for support to make reclaiming a smoother process. We have to work hand in hand. We as the labour need support. We can’t always rely on the government, so we engage with the actual producers. Our Top-Up project helps with salary structure: collect materials and get paid for the service, not the materials directly. For example a reclaimer gets paid 50c per kilo. On  average a reclaimer brings in 300 kilograms of materials; they should be getting R150. It is doable and the right step towards a sustainable wage. We have great support from outside government. Our truck was donated by the Government of Japan together with UNIDO, the United Nations Industrial Development Organisation.

Tell us more about the environmental impact and employment

We didn’t waste time. We knew early on we had to engage with the corporates and the city.

So in addition to adding some structure we started cleaning campaigns, like the one along the Jukskei river. We started working with the World Wide Fund for Nature (WWF) and we are members of the South African Plastics Recycling Organisation – to reduce plastic use in the country.

The pandemic has really affected employment, and people need to work to pay rent and buy food. Our current database of reclaimers is at 9000. Reclaimers from all over South Africa are asking us to come help them set up. One of the guys was in Khayelitsha in Cape Town assisting. So we have national reach and it is empowering to help other people and clean up our environment in one go. We had to start talking to communities to de-stigmatise their thoughts on reclaimers, too. They would ask us “Why are you wearing a balaclava? You look like a criminal.” In the meantime we were wearing it for the smell as we foraged in the waste. We were following Covid-19 protocols way before the pandemic hit us. We were sanitising our hands all the time.

What do you see for the future?

I have this dream of an innovation centre. Reclaimers can park their trolleys so it can be safe. More trucks to transport reclaimers to their work spaces. A daycare for our kids while we work. I want this centre to provide wellness because this is physically taxing work. I want this to intersect every aspect of reclaiming work. One centralised place where we can concentrate all this labour that is saving the City of Johannesburg so much money. Landfills will have a shock to the system if reclaimers did not work for one day. We have impact and an important presence. We deserve acknowledgement. The informal system collects 80-90% of recyclables in South Africa. I would advise anyone to think past traditional ways of work. Look around you: that is what happened for me with reclaiming.

Follow African Reclaimers on IG and Luyanda on IG here and here.