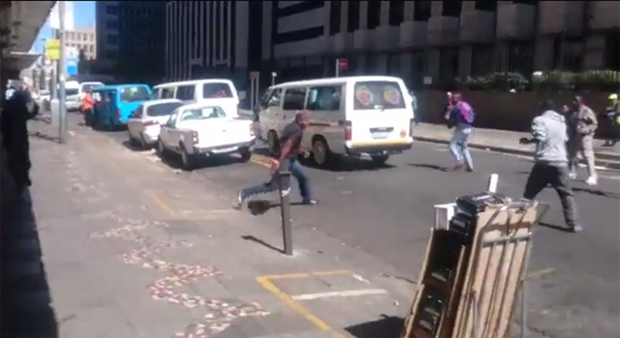 The xenophobic attacks that began in KwaZulu-Natal twoÂ weeks ago have now spread to Johannesburg. On Wednesday, reports emerged that shops owned by immigrants were looted, before they were forced to close down.Â A videoÂ shot by Â SABC reporter Aldrin Sampear, captures some of theÂ chaos. So far, six peopleÂ have been killed since the violence in KZN began, including a 14-year-old boy and more than 1,000 people in the province have been displaced.

According to reports, foreign nationals under threat in the region have now armed themselves againstÂ looters.Â Sampear captured his video in the Johannesburg CBD on Wednesday, saying thatÂ foreigners were fighting back in the city after looters had invaded their stores. InÂ the video, people are seen rapidly running away, while others hurl objects at oneÂ another. Shortly into the footage, a woman screams.