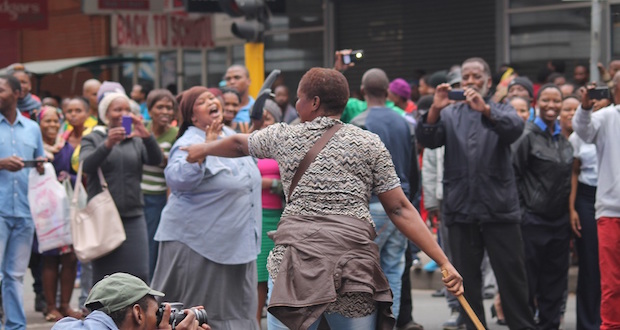 Itâ€™s difficult to explain â€“ much less understand â€“ the xenophobic violence that has, once again, broken out across South Africa. NOSIMILO RAMELA thinks leaders, and all of us, should listen when people air their grievances â€“ and work towards finding solid solutions.Â

My little sister is studying in Durban, a city that is currently in the grip of xenophobic violence. On Wednesday afternoon I called my dad back home in Pietermaritzburg to ask him how they were all doing and if they had been affected by any of it. His response broke my heart.

My heart sank. I didnâ€™t know what to say, so I said nothing.

â€œWhat breaks my heart, my child, is that school children are in this too. Near your mothers workplace, children looted a shop owned by a Somalian. Children did this â€“ children,â€ he said.

My dad is a tough old man. He is not easily clouded by emotion. He always finds reasonable explanations for why things happen and always has a sound way to explain human behaviour. But on Wednesday afternoon my dad was not himself â€“ he was filled with emotion. He could offer no reasonable explanation for the violence taking place at his doorstep; he could not explain the human behaviour that has led to the inhuman killing and burning of fellow men. I wanted him to be his usual self, explain to me why this was happening, and explain to me why our people were doing this. But he couldnâ€™t, because this violence is so gruesome and so senseless.

Flashbacks
In 2008 as a young reporter for the Mail and Guardian newspaper I was at the front line of covering the outbreak of xenophobic violence in Johannesburg. I was one of the first journalists who went to Alexandra township where the violence started. I watched with fear, anger and numbness as angry community members hunted down their neighbours who were foreigners and threatened and threw them out into the streets. I remember standing on London Road, South Africans on one side and foreign nationals on the other side of the street. I didnâ€™t want to be a South African that day. I wanted to be an African â€“ and I wanted it to all stop.

The scenes of blood, smoke and tears Iâ€™ve seen this week in the news have taken me right back to 2008. I knew I could never forget what I saw in 2008. I knew I could never leave it behind; I knew I would carry every experience of that time â€“ every person I spoke to, every smell of burning, every motherâ€™s cry â€“ with me forever. But I didnâ€™t think I would relive it; I didnâ€™t think our country would relive that darkness again. But this week that darkness came back; this week our country, our continent, bled again.

Taking responsibility
Iâ€™m no expert, I am but an African child. I cannot explain this behaviour and I cannot understand it. South Africans are evidently angry. Throughout the year we see service-delivery strikes that turn violent or see miners going on extended strikes, some of which have also ended in bloodshed.

People feel like they are not being heard by government. They feel like they are ignored and forgotten. They watch as their leaders and neighbours lives get better while they suffer the injustices of horrific public service and poverty. People need someone to take responsibility for their continuing hardships, and they blame foreign African nationals for it all.

Itâ€™s not enough for us to condemn this violence; itâ€™s not enough for our leaders to denounce it and plead for an end to it. Our leaders need to listen to people when they air their grievances, and find solid solutions for the problems. We need to do more as a country to teach people that killing each other doesnâ€™t fix anything; that it will not put food on your table. We need to educate â€“ and teach skills â€“ to more and more people in this country. We need to do better as a country. We need to find better ways to air our grievances. Violence cannot be our default response.

– Featured image of anti-peace protestors at the Peace March held in Durban to oppose xenophobia. By Qiniso Mbili.

Nosimilo Ramela is aÂ freelance writer and marketing researcher. She has previously worked for Big Media Publishers, the Mail & Guardian and Community Media for Development, an NGO. She is a closet activist and is passionate about social issues.