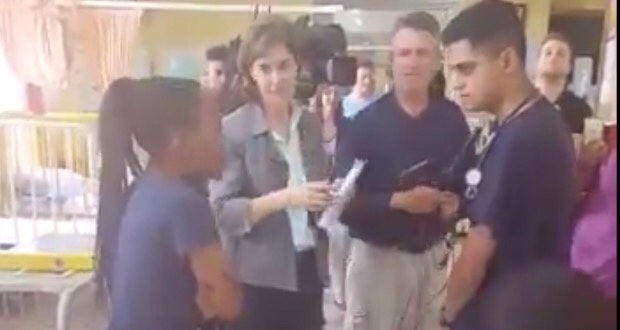 BBC tried to interview students at Rahima Moosa Hospital on graduateing late because of #FeesMustFall. pic.twitter.com/TTy0mNwnR7

The videos start out with a BBC reporter doing an interview with a medical student, Faheem Meer, about possibly having to graduate late after the completion of their degree at the end of the year. Nohaji-Mkoko then intercepts, questioning under whose authority a media crew has been allowed into the ward, and tells Meer that he is â€œmisrepresentingâ€ students.

Nohaji-Mkoko also tells the BBC crew not toÂ be complicit in pushing one narrative of the #FeesMustFall movement. â€œDonâ€™t come here and exploit this public space to push your own BBC agenda. Youâ€™re only interested in telling one side of the story.â€

A number of Wits medical students are currently completing their clinical rounds at Rahima Moosa Mother and Child Hospital in Johannesburg. The effects of the #FeesMustFall protests on medical students have been hotly debated, with many arguing that the continued protests may result in fewer interns entering the medical workforce at the expected rate, something Nohaji-Mkoko disputes in another video.

â€œDon’t impose yourselves on these black bodies and use them as specimens in your show. Don’t use them to try and promote your own supremacist agendas. #FeesMustFall affects every single student, and we don’t care when we graduate. If it means we lose the year, then we lose the year. Fifty percent of our colleagues have lost their education because they don’t have the money to be able to complete tertiary education. And then you want to tell us about people graduating late…what’s even losing the year? If we don’t write exams now then we write them in January, then we graduate then we have interns. Weâ€™re students, all we do now is look at patients, we don’t do any work on the patients. Us not being here doesn’t affect the health system in any negative way.â€ Meer, however, has told The Daily Vox that he was speaking in his capacity as a medical student, and not as a representative of the #FeesMustFall movement. â€œThe BBC crew was doing a segment on how #FeesMustFall has and might impact final year students, and I was suggested as one of these, presumably because of my previous involvement in student representation. As I explained in the interview, due to the structure of our calendar, the faculty has managed to find time to make up for the time lost during the shutdown, so that we don’t effectively lose clinical teaching … In response to the more general questions, I tried to give a more neutral view and represent multiple sides of the discussion.

As the interview was ending, the student in the video, Xola, began asking me a number of questions, all of which someone else recorded. Of course, I wasn’t given a chance to respond, and wasn’t prepared for the litany of passionate questions unrelated to the interview. I responded that I would be happy to respond if allowed and asked which she would like to begin with. She also questioned the integrity of my responses, which I will put down to her either not hearing or mishearing the interview. I am still happy to discuss anything in which I feel I have something to add, if given a fair opportunity.â€

Meer also says that consent for the interview was granted by hospital management. â€œIt was requested and given by the hospital CEO, it was discussed with the matron, and mothers included in any footage were either consented for inclusion or assured that faces or identifying images would not be included. It was also arranged in conjunction with the head of department.”

UPDATE: The BBC journalist, Karen Allen, sent a tweet saying that the BBC team had full consent from the hospital to film there. She said that she would not engage the matter further.

For record my BBC team had full consent. We didn't consent to be part of a stunt video when iv was hijacked . Not engaging on this further.