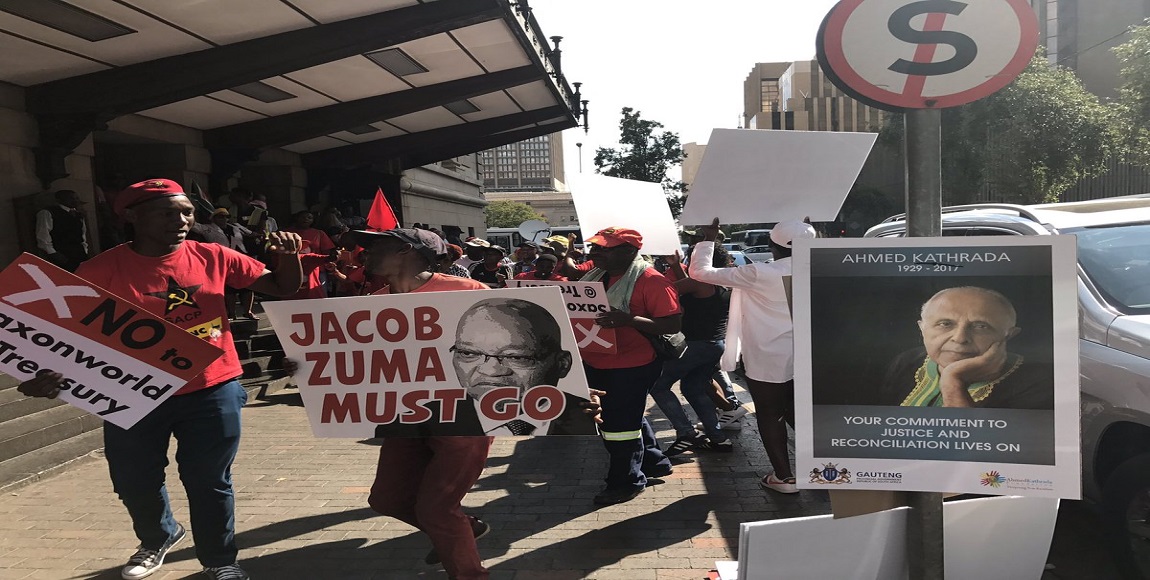 Sabeehah Motala (22), a student and intern at Corruption Watch, was at a dinner party on Thursday evening when her work WhatsApp group lit up with the news of the cabinet reshuffle. Motala turned on the TV and watched in horror.

Last week, President Jacob Zuma finally made the dreaded cabinet reshuffle that had been expected since he called then-Finance Minister Pravin Gordhan back from an investorsâ€™ roadshow in the UK. Â Zuma fired five ministers, including Gordhan, and moved several more to other departments, sending the country into a tailspin.

The reshuffle came just a day after former Robben Island inmate and African National Congress (ANC) struggle hero Ahmed Kathrada was buried. Since then, South Africans have been lamenting the state of nation – the rand is sinking, the country has been downgraded to junk status and mass action is being organised demanding that Zuma step down.

â€œWhat scares me is that our president is able to ruthlessly, audaciously and arrogantly abuse his power, as if daring the people to take a stand. Zuma is too comfortable in his position, he feels untouchable,â€ Motala told The Daily Vox.

Tshegofatso Putu (21), who studies politics, philosophy and economics, is also afraid of the absolute power Zuma seems to have in the ANC. â€œHe is untouchable in the ANC and continues to ensure that he surrounds himself with people he wields influence over. This reshuffle … is self-serving. I do not believe that [it] is based on merit, but to ensure the longevity of Zumaâ€™s power and influence until the end of his tenure,â€ she said.

Mxolisi Masango (23), a law student, had been listening to the radio, waiting for news of the cabinet reshuffle. He said heâ€™d been expecting a reshuffle ever since 2015 when then-finance minister Nhlanhla Nene was fired and replaced by ANC loyalist, Des van Rooyen.

Masango said heâ€™s despondent about the reshuffle because this means more division in the ANC. â€œThere will be easy access to capital and they [Zumaâ€™s faction] can do whatever they want with taxpayers’ money. There will be looting and the party taking over in 2019 will have nothing to inherit.â€

Motala is also concerned about the negative economic impact the reshuffle will have on people whose salaries won’t change, but who will still have to fork out extra money for a loaf of bread. Â â€œThe value of the rand dropping means that things are going to be more expensive,â€ she said.

Bongeka Makatsa (24), an entrepreneur, is also troubled by the weakening rand. â€œLess FDI [foreign direct investment] could destabilise the businesses that heavily rely on it. When that happens, I as an entrepreneur suffer because it means less disposable income for my customers,â€ she said.

For energy and climate change consultant, Kukhanya Ncube (26), the biggest concern is the nuclear deal. Governmentâ€™s plans to develop a 9.6GW nuclear production facility is shrouded in controversy over links between the Russian nuclear industry, the wealthy Gupta family and certain factions of the ANC. Both Gordhan and Nene opposed the deal. â€œ[Iâ€™m afraid] that the nuclear deal will now go ahead,â€ said Ncube, who said he was afraid that â€œthe Guptas now have their hands on the treasuryâ€.

The Zuma and Gupta alliance, referred to by some as the â€œZuptasâ€, is considered by many to be guilty of state capture – high level of corruption where an outside party has a hand in high-impact governmental decisions.

Putu said Zumaâ€™s rearranging of the cabinet will have tangible repercussions on the lives of many. â€œIâ€™m tired of complaining about Zuma. He has survived every controversy â€“ from his rape case to Nkandla and GuptaGate. The ANC has shown itself to be morally corrupt and have made him untouchable to their own detriment.â€

Putu refuses to be a part of what she called â€œwhite-liberal initiated actionâ€ like #ZumaMustFall and #BlackMonday. Â These groups, she said, only rally when there is a threat to the stability white capital needs to continue thriving, she said, and never for the issues that face black South Africans.

Instead, she would be making her voice heard in the 2019 election. â€œWe need a government that is not morally corrupt and irreproachable,â€ she said.

Masango also opposed protesting the reshuffle. â€œZuma has the right to fire ministers and appoint [them]. I can’t protest against a president that was elected democratically. The ANC themselves need to remove him.â€

Although he is unhappy with the direction the country is going, party politics dictate that it is the ANCâ€™s duty – and not the publicâ€™s – to remove Zuma, he said.

â€œOur problems go beyond Zuma. I advocate for radical economic transformation and I think that’s what Zuma is trying to push. He is not the perfect person to push that agenda, his reputation is tarnished and we can no longer trust him. South Africa faces a very bleak and dark future,â€ he said.

But some are not content with waiting for the general election. On Monday, several groups called for Zuma to resign and are pushing for public protests.

Motala she plans to demonstrate. â€œI don’t want to watch more of my country being sold off to the Zupta franchise,â€ she said, adding, â€œI think people have forgotten what democratic participation means. It doesn’t just end after you cast your ballot.â€

Sheâ€™s optimistic about the countryâ€™s future. â€œWe just need people to remember that this country belongs to us. It’s a tough battle but as long as there are people with the energy for change, I can’t and won’t stop fighting to fix it,â€ she said.

Ncube is also prepared to protest. He said South Africans have a responsibility to â€œhold uBaba accountable. We have a great potential as a growing economy, but we have put our future in the wrong hands. It is now every citizen’s duty to save the state from looters, or else the future generations will inherit a broken, indebted South Africa.â€

But Makatsa doesnâ€™t see the point in protesting when whatâ€™s needed is â€œclear systematic changeâ€. â€œPeople have been trying [to get Zuma to step down] and all it equals to at the end of the day is a fun day in the sun where Zumaâ€™s enemies feed you KFC,â€ she said.

Still, she isnâ€™t worried about the frenzy over the cabinet reshuffle. â€œWe don’t have to start planning to leave for Australia just yet, my people. South Africa will be fine.â€