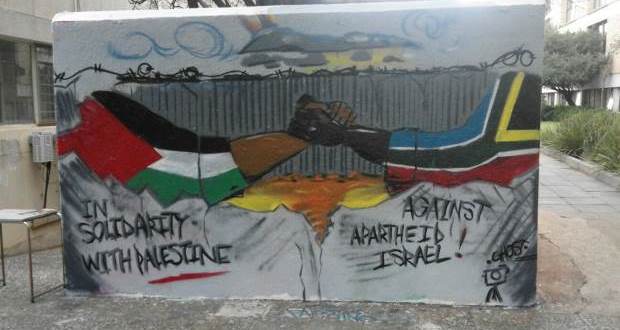 DR RAMZY BAROUD says that the present struggle against apartheid in Palestine is not merely similar to that of South Africa. Both struggles are extensions of the same movement, the same fight for freedom, and, in fact, against the same enemy.

After concluding a talk in Durban, South Africa a few years ago, I took my seat on the panel next to a former South African minister and active member of the African National Congress (ANC). He was quite pleased that a message of unity between Palestinians and South Africans was communicated clearly on that evening, but had a message for me.

I fully agree, Ramzy he whispered in my ear, rolling the “R” in that distinct South African accent. But you must realise that for the boycott call to be effective, it has to start from Palestine. It needs to come from the Palestinian leadership itself.

What the former minister was of course referring to was the fact that it was the leaders of the ANC who spearheaded the efforts and made the original call for boycott of an oppressive and racist government which consigned the black majority into subservient multitudes in their own country, divided the society along racial lines, and allocated perks and privileges accordingly.

When Albert Luthuli made the original appeal for boycott, the South African struggle was merely beginning to develop into an unstoppable force, with a political leadership that articulated the sentiment of millions of oppressed people throughout the country. Moreover, there was also Pan-African solidarity that was being manifested in various political branches – nationalistic, anti-colonialist and anti-imperialist.

Therefore, it was hardly shocking that one of the messages that registered most among British anti-apartheid activists, and which led to the boycott movement, came from the Tanzanian leader, Julius Nyerere in 1959:

We are not asking you, the British people, for anything special. We are just asking you to withdraw your support from apartheid by not buying South African goods.â€

The message might have been simplistic in its articulation or even expectations, but most consequential in its outcomes. It was the least taxing form of moral accountability: the simple act of not purchasing South African products would result in the eventual immobilisation of an unjust economy.

That very boycott movement became more complex with time, evolving into other forms of boycott as well – cultural, sports and academic. That collective effort eventually resulted in an ultimatum to the racist government in Pretoria: end the system of racial discrimination or face complete and utter isolation. The message was unambiguous, powerful and demanding.

In July 2005, hundreds of Palestinian civil society organisations articulated that very call, demanding moral accountability from people all over the world. The call was seemingly “basic”, yet universal in its appeal, and inclusive in its spirit:

We, representatives of Palestinian civil society, call upon international civil society organisations and people of conscience all over the world to impose broad boycotts and implement divestment initiatives against Israel similar to those applied to South Africa in the apartheid era.

We appeal to you to pressure your respective states to impose embargoes and sanctions against Israel.

We also invite conscientious Israelis to support this call, for the sake of justice and genuine peace.

As predicted, and unfortunately so, the Palestinian leadership, as represented in the government of Mahmoud Abbas in Ramallah, is yet to champion that call. It has wasted over 20 years of nonsensical and futile negotiations, collaborated with Israel, divided the ranks of Palestinians and is actively involved in suppressing Palestinian resistance in the West Bank.

The other Palestinian leadership, Hamas, which has been an active force of resistance in Gaza and paid a heavy price of death and besiegement as a result, is yet to break away from a local and regional mindset and politicking; and is yet to appreciate the need for mobilising and uniting in a universal movement that aims at isolating Israel with the ultimate goal of ending its war crimes, dismantling apartheid and granting Palestinians their rights and freedom.

Entrapped in their fictional feuding, current Palestinian leaderships have done more harm to the Palestinian cause than they can possibly imagine.

Until that conflict is settled, and a fairly representative Palestinian leadership emerges, the role of civil society in ending Israeli apartheid becomes even more accentuated than ever.

Knowing that, Israel, alongside its American sponsors, has invested tremendous energies and resources in order to prolong Palestinian division. Unity based on minimal democratic ideals means a clear, focused leadership with an unmistakable national liberation strategy that aims at resisting Israel at home, and galvanising the boycott movement abroad. It also means that once the Boycott, Divestment and Sanctions (BDS) movement reaches a critical mass, a capable Palestinian leadership can then maintain its popular sway in order to achieve political gains, and once and for all, negotiate an end to Palestinian suffering.

For over ten years, thousands of civil society organisations around the world, massive unions, hundreds of universities and even small community gatherings have worked hard, and at phenomenal speed. They managed to transform what seemed to Israel nothing more than the persistent and pesky Palestinian call for boycott, on a global front, in order to end that very war waged by apartheid-minded Israel. Various Western governments and American states are now clamouring to condemn the movement, to criminalise its efforts and to slow down its massive tide, all to no avail.

However, criminalising civil society is as ludicrous as it is useless. If these efforts are an indication of anything, it is that initial anxiety in Israel has turned into actual fears, a real and tangible dread that Palestinians are aspiring towards a very effective South African example. And considering the constant flow of support for BDS, it seems that the anticipated moment is drawing closer.

In my last South African speaking tour, a few years ago, I was approached by two South African men. They seemed particularly grateful for reasons that initially eluded me. We want to thank you so much for your support of our struggle against apartheid, one said with so much sincerity and palpable emotions.

It made sense. Palestinians saw the struggle of their black brethren as their own struggle. I grew up in a refugee camp with three idols: Palestinian artist and militant, Ghassan Kanafani, Argentinian revolutionary, Che Guevara, and Nelson Mandela. The first was assassinated by Israeli Mossad in Beirut, the second was captured and murdered by government forces in Bolivia, and Nelson Mandela lived to crown his own freedom with that of his people.

But the two men were not referring to sentimentalities. While the Israeli government, military and intelligence supported the apartheid government in many ways, the Palestine Liberation Organization (PLO) had actually trained and equipped ANC fighters. Cuba and others did too, but to think that the Palestinian leadership then had the kind of political consciousness to extend a hand of solidarity to a nation fighting for its freedom, while the Palestinian people were themselves still enduring that same fight, filled me with pride.

Those men told me that they still hold onto their PLO-supplied military uniforms, even after all these years. We embraced and parted ways, but with time I came to realise that the present struggle against apartheid in Palestine is not merely similar to that of South Africa. Both struggles are extensions of the same movement, the same fight for freedom, and, in fact, against the same enemy.

When Nelson Mandela said, “We know all too well that our freedom is incomplete without the freedom of the Palestinians, he was not trying to be cordial or diplomatic. He meant every word.

Dr Ramzy Baroud has been writing about the Middle East for over 20 years. He is an internationally-syndicated columnist, a media consultant, an author of several books and the founder of PalestineChronicle.com. His books include “Searching Jenin”, “The Second Palestinian Intifada” and his latest “My Father Was a Freedom Fighter: Gaza’s Untold Story”. His website is www.ramzybaroud.net.