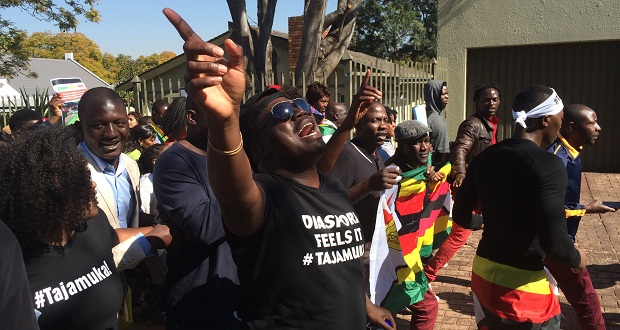 On Thursday, hundreds of Zimbabwean and South African citizens marched to the Zimbabwean embassy in solidarity with the #ThisFlag protests and to hand over a memorandum of demands. The DANA DA SILVA and MOHAMMED JAMEEL ABDULLA asked some protestors why they were there. [dropcap]â€œ[/dropcap]I have to play my part to bring about change in Zimbabwe. Itâ€™s pretty sad in the sense that we have a senile, ignorant president who has no idea what his cabinet ministers are up to. The cabinet ministers are out to enrich themselves at the expense of the masses. Unfortunately this has led to where we are right now. I think the only thing South Africa can do right now to support is work with the majority, try make the economy of Zimbabwe resuscitated.Â Itâ€™s the only way us as Zimbabweans can leave South Africa and the government has a lesser burden. We all know the service delivery protests in South Africa; the more of us that are here the more strain there is on the South African economy. So if they work with us to make our economy prosperous, weâ€™ll all leave and go home.â€

We are about to arrive at the Zimbabwe Embassy. #ThisFlag pic.twitter.com/oTvEG938BR Nkazimulo Dladla, 23, waitron, Nyamandhlovu, Zimbabwe
[dropcap]â€œ[/dropcap]We are here to fight back for our country. We are saying we are tired, Mugabe has destroyed our country and enough is enough. Weâ€™ve been running away from Zimbabwe to find a better living in South Africa but itâ€™s time to go back to our home country and we are tired, we want it back. Mugabe must just go because heâ€™s damaged that country. We want to rebuild it, because right now, itâ€™s nothing. We donâ€™t even have our own money. Have you ever heard of a country that doesnâ€™t have its own currency?Â We need all the support we can get to get Mugabe out, heâ€™s been ruling for so long. Ever since I was born, some of my age group have even died with one president. We are hoping, we are praying that he gets the message, that they get the message that we donâ€™t want them anymore. We want a new leadership.â€ Tafadzwa Kuvheya, 36, Alliance for Natural Resources in Africa, Harare, Zimbabwe
[dropcap]â€œ[/dropcap]What brings me here is the love for my country. The poor governance that is going on in Zimbabwe, the injustice, the poverty, the corruption, itâ€™s too much and weâ€™re saying itâ€™s enough. What theyâ€™ve done is enough. As you can see I am holding this placard which says, â€œlook for our $15 billion.â€ If this 15 billion was there, I would not be suffering in this country, I would not be living in a foreign land. I would be back at home, contributing to building my country. As it is right now, with all my education, I cannot do anything for my country.Â Itâ€™s difficult in Zimbabwe, even if you have an education the amount of money that you get, you cannot even survive. Things are difficult. Some of my colleagues are vendors on the street who I went to university with. So I had to come to find a better life here. But we want to go back home, we donâ€™t want to live here, we want to go back home. We want to build our country.â€ Elias Mashayamom, 30, research fellow at the University of Pretoria, Marondera, Zimbabwe
[dropcap]â€œ[/dropcap]Iâ€™m actually here to support the citizens of Zimbabwe in this bold move that theyâ€™ve taken to demand that ZANU PF steps down. So much has been going on. If you look at it from the government perspective or from the way the government is handling things, itâ€™s really sad, itâ€™s a shame. But the way citizens are responding to government action, Iâ€™m really proud of the citizens. Iâ€™m actually quite happy and encouraged.Â For the first time in a very long time, Iâ€™m hopeful. Zimbabwe is getting somewhere. I hope change comes to Zimbabwe, it might not come now, it might come in the near future, but beyond 2018 I donâ€™t think Mugabe is going to be president of Zimbabwe. I donâ€™t think heâ€™s even going to be the president of ZANU PF.â€ Anna Salimo, 36, medical scientist, Harare, Zimbabwe
[dropcap]â€œ[/dropcap]Iâ€™m tired of living outside my home country, I want to go back home. But right now the situation is just unbearable, economically, politically, itâ€™s just unstable, itâ€™s unpredictable. We want change in Zimbabwe. We want to restore economic stability, thatâ€™s what we are standing for right now, thatâ€™s what we are hoping to change.Â Itâ€™s very sad, itâ€™s really very sad. The way the government is treating people itâ€™s like they donâ€™t care at all. Itâ€™s like they donâ€™t see whatâ€™s happening on the ground. I mean people are starving, literally. They try to make a livelihood by buying stuff from South Africa. They impose import bans, basically killing the people, killing the nation. Thatâ€™s whatâ€™s packed all of this outrage really, we are tired. Corruption is unending; corruption is just way too high. We want to end all of that; we want our country back to maintain the Zimbabwe that we know.â€ Nobukhosi Zulu, 27, lawyer, Bulawayo, Zimbabwe
[dropcap]â€œ[/dropcap]Zimbabweans have been bubbling and boiling under for many years but for me, I would say Pastor Evan Mawarire led us. He is an amazing man, he used to be my pastor. Zimbabweans needed a voice â€“ and someone to be brave enough to rise up and give us the courage to rise up in our own capacity. And thatâ€™s what I think pastor E has done. He has given the power to the Zimbabweans – Not to any political party, not to any great movement. Heâ€™s saying: â€œCitizens, take your power back as people”.Â #ThisFlag was started because Pastor E couldnâ€™t afford the fees for his children, an issue that so many Zimbabweans are struggling with. You take them to a government school but the systems have fallen â€“ private education is just unaffordable. As a Zimbabwean parent he had this pain, and itâ€™s this pain of generations of Zimbabweans inside of him.Â As he began to articulate it, it raised something up in all of us â€“ all around the world.Â Weâ€™re done with the narrative of the movement being about Western imperialistic powers trying to capture the country. Man, we have heard it so many times. Iâ€™m here in my own capacity. No one is funding me. No one is funding us.â€ Nyasha Gurure, 22, student, Bulawayo
[dropcap]â€œ[/dropcap]We left Zimbabwe to study in South Africa â€“ we ran away from our country. Right now even our parents in Zimbabwe canâ€™t afford to send us to school or send us money here. Thatâ€™s why Iâ€™m here, to protest against this.Â What I would like from South Africans is the support that many are showing right now. Yes we are Zimbabweans but we also have South Africans here: ANC, DA, EFF. Itâ€™s not only a problem thatâ€™s affecting Zimbabwe, itâ€™s a problem thatâ€™s affecting Africa. And, as our brothers and sisters, I would urge them to support us with media coverage and everything.â€

Student leaders have come out to support the cause. @thenextbarack was filming a plea of support. #ThisFlag pic.twitter.com/NXcQlU5iPy Shingirai Muzembe, 28, student, Bulawayo
[dropcap]â€œ[/dropcap]Our biggest issues are police brutality, economic hardships â€“ one of the main reasons I left â€“ and also thereâ€™s lawlessness. We have a country where people will just wake and decide, ok letâ€™s just arrest and abduct people. People just disappear. The rule of law is being abused â€“ the police are actually enemies of the people, theyâ€™re not protecting us anymore. So weâ€™re saying, what is happening to our country?Â You know our flag used to have all these colours that used to stand for something. But now we see the green – itâ€™s for crops, yet we donâ€™t have crops, we donâ€™t have food. The blood red – people died and blood was shed but it was all for nothing. Our country is in ruins.Â I think South Africans should go back to their history and theyâ€™ll find out that at one time they also had people who were exiles in Zimbabwe. So they should just return the favour and be more aware of whatâ€™s happening to the people next door to them and show solidarity. Be there to support us, help us at demonstrations. Just be more aware that we do have a problem, weâ€™re not here because we want to. We would also want to go back home at some point in time.â€ Munashe Masango, 20, student, Mutare, Zimbabwe
[dropcap]â€œ[/dropcap]Our biggest issues are unemployment and, with Mugabe, the corruption. They are stealing from us. A lot of money. Like 15 billion just disappeared. How can 15 billion just disappear? Look at NASA. It took $2 billion and they went to Jupiter. But with 15 billion we donâ€™t even have buses! How do you explain that? South Africans should help us, should stand with us. I was listening to Gwede Mantasheâ€™s interview yesterday, he was saying that we are hired to do this. How can we be hired to do this? We canâ€™t be hired to be told we are hungry. We canâ€™t be hired to be told that we are unemployed. We need someone who knows, who feels the same pain with us. We are suffering and we need to make this thing change â€“ we need a revolution.Â This movement is supported by the youth â€“ the people who have vision. You know right now most people in Zimbabwe are afraid, because Mugabe kills a lot of people. So if youâ€™re an activist youâ€™ll die. But at least right now we have Zimbabweans who are fearless, Zimbabweans who are selfless, Zimbabweans who have vision. Those who want a better future.â€