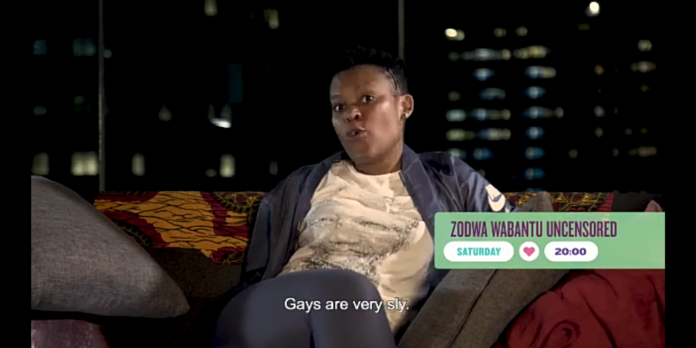 On a recent episode of reality-tv show Zodwa Wabantu Uncensored, the titular star Zodwa Libram (also known as Zodwa Wabantu) went on a homophobic/transphobic rant, and we the queer community, are not having it, with the hashtag, #Zodwacancelled trending over the weekend and today. What makes Zodwa’s rant problematic is every word she utters in the rant but, in addition to that, her gay-bashing opinion (if we may dreadfully call it an opinion) puts to question the idea of tolerance. Zodwa’s rant proves, for anyone who may have thought otherwise, that the lesbian, gay, bisexual, trans, intersex and queer plus (LGBTIQ+) community does not need tolerance. Tolerance is problematic.

What makes matters worse, is that under this homophobia is a layer of transphobia that needs problematising.

Additionally, that very line is transphobic as it is an attack on gay men that, because of her no understanding of sexuality, misfires and targets trans people who may want gender realignment surgery. People who don’t understand trans identity have said things like ‘they’re just gay men who want vaginas’ or ‘they’re just men who want to be women’. No both are wrong. Trans women are women and the surgery is just for realignment; not all trans people even want gender realignment surgery.

The point on tolerance comes when Zodwa says, “we accommodate you guys to wear make-up”. The operative word here being ‘accommodate’. Not all gay men even wear make-up, this is once again transphobia. Most trans people in South Africa can’t afford gender realignment surgery or the necessary drugs for the process. Medical aids, most at least, do not even cover these costs because they are deemed “lifestyle choices”.

What this means is that many trans people, especially black trans people from impoverished backgrounds, cannot afford this journey and so, to ignorant people like Zodwa, could be ‘the gays’ she accommodates and allows to wear make-up. What Zodwa says is hurtful to those trans people because they are often seen as men in dresses and makeup or women in boys clothing.

Also, by using the word “accommodate” to explain her relation to gay men or queer people, points to tolerance and but not acceptance. Tolerance just means ‘we allow you to exist but only on our terms, only when we allow you to. We let you exist because getting rid of you is probably a crime and I’d rather not do that’. That’s tolerance and we, the queers/the community, don’t want that. We want acceptance.

Acceptance is more ‘this you, you are who you are, I accept that and I can only let you be, not on my own terms but your own’. Acceptance is just letting people be while tolerance is allowing people to be because of circumstances, in that you can’t do anything about it. We tolerate the winter cold because we can’t do anything about it but if we could, get rid! That’s tolerance. Tolerance is why racism increased in the USA after Trump became president because now there was a president who gave white nationalists less reason to be tolerant and closet racists.

Zodwa’s rant is homophobic and transphobic. It shows no understanding of the queer community and the complexities that surround the community. I have been writing on queer issues since 2014 but I still don’t feel clued up enough to just go and rant about people I do not fully understand. Most people’s reactions to Zodwa is that it is homophobia and while it is, her non-existent comprehension of gay identity made her rant fire bullets, whether intentionally or unintentionally, at trans bodies too. And trans people have a lot to deal with: Invisibility in community, a lack of representation in media, constantly being misunderstood and misgendered, and physical and emotional violence. The trans community does not need people like Zodwa opening their mouths in the way she did.

So, should we cancel Zodwa? Yes, obviously. At least we as the queer community should. The straights online are already saying they won’t cancel her. But also, what would we be cancelling? What is Zodwa, why is she famous? At best I can say body positivity and owning her feminine sexuality… These are things I can stan but transphobia and homophobia are things I cannot stan and so, Zodwa? Get rid! We don’t need your accommodation.