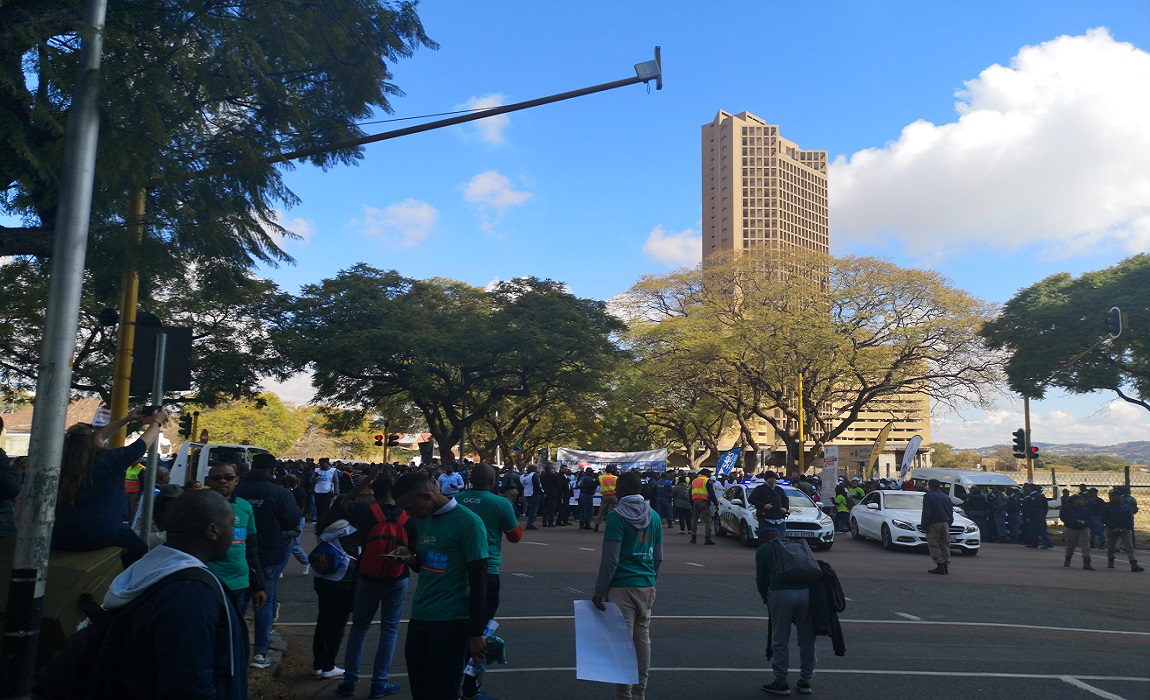 I just arrived at Church Square in Pretoria where the #100MenMarch is set to start from. @thedailyvox pic.twitter.com/vmNeiRnqyB

Hundreds of men from various sectors in South African society showed up to call for the end of violence against womxn and children. There were men from government, faith-based organisations, non-governmental organisations and the private sector. The crowd was peppered with womxn, and even a few children, but was overwhelmingly male. Marchers gathered in the Pretoria CBD at 10:00 and then marched through the streets, eventually ending up on the grounds before the Union Buildings by 12:00.

Ministers and representatives from the various organisations present addressed the crowd there. They reiterated that “no means no” and that “real men don’t rape”. They also congratulated the “progressive men” who had attended the march because “not all men” are responsible for gender-based violence.

Minister of Women Bathabile Dlamini says no to violence against women and children. #100MenMarch pic.twitter.com/ZlSci22q2s

Deputy speaker of Parliament says there must must be order in our homes, in the workplace… #100MenMarch pic.twitter.com/HGOIJZeobe

The march was flanked by police minister Bheki Cele’s young police students. Cele said he had invited the students to the march to conscientise them against gender-based violence from the beginning of their careers. At the formal programme in front of the Union Buildings, Cele said to the police force: “When a womxn comes to the police station, don’t tell her to go back and negotiate. You go and arrest the perpetrator.”

As jaded as it sounds, I didn’t expect men to show up for womxn. So it was reassuring – even uplifting – to see the men that had taken their time to march for womxn.

However, that doesn’t mean the march itself wasn’t deeply uncomfortable for me as a womxn. Just because we marched against gender-based violence did not mean I didn’t get catcalled, inappropriately spoken to, harassed for my number or photos with men, and jostled. It did mean that I was constantly hyper-aware of my surroundings, that I always greeted the men who greeted/ catcalled me back for fear of retaliation if I didn’t, and that I looked for female journalists to walk with.

Of course, the sheer amount of cops was not exactly reassuring either.

That’s just the reality of it. That’s what it’s like being a womxn and also a journalist. The records of gender-based violence speak for themselves.

A womxn’s body is a site of violence. In South Africa, womxn are raped on taxis as they commute to and from work, lesbians are raped as if their sexuality is something that needs correcting, children and babies are raped. Womxn and children live in abusive marriages. Womxn are catcalled, harassed and assaulted on the streets every day. And men are the perpetrators of this violence.

This is why I understand why organisers of the Intersectional Womxn’s march The Total Shutdown refuse to march with the perpetrators. With men. On August 1, an organisation of feminists and gender activists are calling on all women, gender non-conforming people and the queer community to stay away from work and join the protests around the country.

Found members of the national steering committee of #TheTotalShutdown who came out to attend the #100MenMarch. @Ezamission @genieoddity and Nkeletseng Tsetsane say they commend the men who have come out today but recognize that these men are perpetrators of GBV. pic.twitter.com/olPqAhyKrA

. @GenieOddity from #TheTotalShutdown speaks up against violence against transpeople as well. This is the first time transpeople were mentioned during the #100MenMarch pic.twitter.com/ZDObQPvEoy

While I can appreciate a march without men, I don’t think the solution lies in marching without men.

As a womxn, I am tired. I am tired of having to be an activist for my basic human rights in crowds and conversations, online and in the streets. I need men to take responsibility.

Men must take responsibility for the role they play in perpetuating a cycle of violence against womxn. The men should carry on marching – but not for the same reasons that they marched for the 100 Men March.

The 100 Men March felt like a farce. Words like “no means no” and “enough is enough” reverberated through crowds of men who take absolutely no responsibility for the role they play in perpetuating gender-based violence and a violent patriarchy. Why are we celebrating so-called progressive men who are marching against gender-based violence as if they do not perpetuate it every day?

You don’t have to be a rapist and a wife beater to perpetuate gender-based violence.

If government is serious about gender-based violence – as they claim a couple of times a year, they need to show us with their actions. We are tired of overused rhetoric when men such as Mduduzi Manana continue to operate within government, when our department of women continues to shame and victim blame womxn, when our police departments continuously mishandle cases of rape survivors and gender-based violence.

Instead of singing the Not All Men song, men and government need to take responsibility for their roles in perpetuating violence against womxn and children.

*The term “womxn” is used intentionally to be inclusive of all femme identifying bodies, not just cisgendered women.