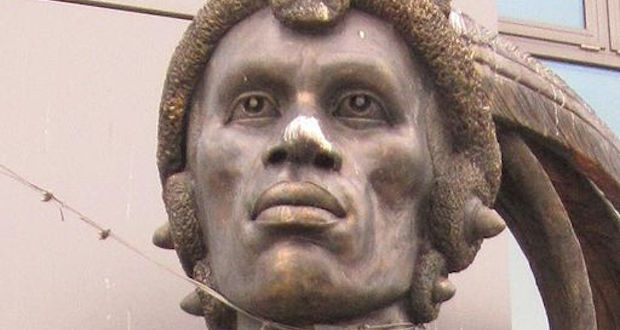 Shaka Zulu is the most famous African ruler to ever walk South African soil. Popular stereotypes imposed on the modern-day Zulu people continue to be influenced by facts and myths about Shaka. We all know that Shaka remodeled the assegai, turning a long, throwing weapon into a much more effective, short stabbing one. Now QINISO MBILI shares some lesser-known facts about the Zulu king.

1. Illegitimate child
It’s believed the founder of the Zulu clan was conceived through what started out as ukuhlobonga, a sexual act without actual penetration, allowed to unmarried couples, during which Senzangakhona and Nandi got carried away. As a consequence to his illegitimacy, Shaka was raised in his mother’s settlements. He was trained and served as a warrior under Dingiswayo, chief of the Mthethwa clan.

2. Sgidi, not Shaka
Senzangakhona, his father, never called his son Shaka. He named him Sgidi and the child resented being called Shaka. The name he would eventually become known by was a reference to his illegitimacy. Nandi’s clan at first refused to believe she could be pregnant, as she was not married, and instead thought her pregnancy symptoms to be the result of a disease known as utshaka.

3. Curiosity drove him
Shaka was a curious person. He wanted to know how things worked, whatever the cost. Besides the infamous event in which Shaka sliced a live pregnant woman’s belly open to see how the unborn baby occupied that space, historians claim he once ordered a man’s eyes to be taken out so that he could observe how the man would adapt to his new circumstances. He also planned to send one of his most loyal men, Sotobe, overseas to England to learn more about the British invaders and their weaponry. But Sotobe only made it as far as the Cape Colony and returned after Shaka’s death.

4. Shaka the traveller
Shaka was fond of traveling. It is reported that he sat very little indoors and travelled the country by foot. Many places known today in KwaZulu-Natal were named according to Shaka’s first interactions with them, for example he found the water of Amanzimtoti sweet or tasty, he survived an assassination attack at the place now known as KwaDukuza (dukuza is isiZulu for ‘lightly stabbing’), and many people from his tribe were grabbed (in isiZulu ukuphanga) by crocodiles at the place known as Mpangeni.

5. Spartan approach to his people
His capital kraal was called KwaBulawayo, which means where they are killed. People deemed unfit to live were brought to KwaBulawayo to be killed off. These included short men, deemed useless as they would not be able to see approaching enemy impi (warriors) from afar; troops who had wounds in their backs after a battle, as this meant they’d been running away; and anyone who went against his will.

6. How Shaka grew the Zulu clan
Shaka sought to change things that did not make sense to him. He was a singleminded dictator who killed thousands of people, some of them his own, for the sake of unifying the Zulu tribes. He used warfare to achieve his political agenda and to instill fear and respect for his rule. Tribes like the Mkhize, Sithole and Luthuli were won over through patronage and reward rather than war and intimidation, and the chiefs of tribes who surrendered to him were made Izinduna commanders in his own tribe. Unifying the people of Zululand took him about 10 years, during which time Shaka exponentially expanded the Zulu clan.

7. Respect for a select few
Few men were allowed to challenge Shaka’s decisions. One of them was Ngqengelele kaMvuyana, a Buthelezi who had arrived as a stranger to Mthaniya’s place but was later adopted and gradually earned Shaka’s respect. Another was Shaka’s protégé, Zulu kaNogandaya, who had almost equal rights to Shaka. Zulu kaNogandaya could do as he pleased with Shaka’s support, and was one of few people who ate with Shaka. (No one else had the courage or rank to do so.)

8. Anti-marriage stance
Shaka prevented his troops, even old men, from marrying, as he believed that marital affairs would weaken the men’s combat skills. He would claim that he was saving them from the evils present in marriage.

9. Killed by a servant
Although it is popularly believed Shaka was killed by his half-brothers, an oral testimony in the James Stuart archive suggests Shaka was killed by, or at the direction of, Mbopha, servant who sought to avenge his mother’s death at Shaka’s hands. At the time of his death, Shaka ruled over 250,000 people. White adventurers met Shaka only in the last four years of his life.

– Further reading: James Stuart Archive and Myth of Iron: Shaka in History by Dan Wylie.
– Images by Jacob Truedson Demitz for Ristesson History and James King, both via Wikimedia Commons