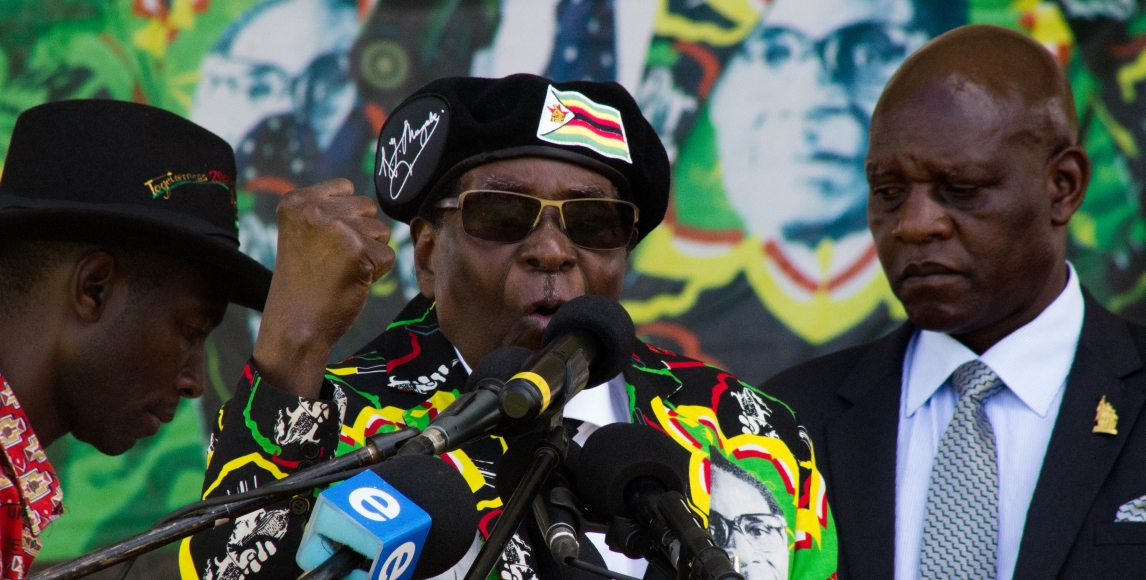 The unthinkable has happened in Zimbabwe. After a day of fake news and hyped up versions of reality, of military tanks spotted around the capital, President Robert Gabriel Mugabe and his wife Grace, are now reportedly under house arrest. Theyâ€™ve been cornered by General Constantino Chiwenga, the head of the armed forces whose arguably the most feared man in Zimbabwe after President Robert Mugabe. It just feels so surreal.

Time needs to pause a century for one to fully digest the news that Mugabe has been detained by one of the men who has supported his near 40-year dictatorship. And itâ€™s not just Bob, his wife Grace has been arrested too. Theyâ€™re holed up at the Blue Roof, their plush home in the upmarket Borrowdale suburb in Harare.

But their allies havenâ€™t been so lucky.

Kudzai Chipanga, the head of the youth league, the biggest advocate for Mugabeâ€™s life presidency, is reportedly under detention by the military along with several other ministers.

I shed no tears for them, but I do hope the military sticks to their word.

They say itâ€™s not a complete military takeover, to weed out â€œthe criminalsâ€ around Mugabe who allegedly want to hijack the gains of the liberation struggle. They also says they want to â€œpacifyâ€ political and economic wrongs. Nobody knows what a military â€œpacificationâ€ could mean in its fullest sense, itâ€™s not been bloodless so people are cautious because this is not a fight that involves us.

This is a fight between the strongmen, the countryâ€™s liberators, flexing their muscles and settling old scores lest history ever forgets them. Mugabe has earned his legacy as the master eliminator, from the oustings of party critics and potential threats since the 1970s Chimurenga.

He has his (bloody) stripes. But begrudged Chiwenga has a score to settle to with him.

Just like Mugabe, he wants to fight to protect the armyâ€™s â€œmajority shareholdingâ€ in the countryâ€™s liberation struggle as he said on Monday. The Mgagao Declaration drafted in Tanzaniaâ€™s training camps in 1975 is where they both draw their strengths; one as an usurper and the other an enabler, who as a young soldier facilitated Mugabeâ€™s toppling of Reverend Ndabaningi Sithole, the leader at the time of ZANU. Till today the bond stands, but Mugabeâ€™s recent attempts to purge scores of people in Zanu PF and elevate First Lady Grace Mugabe and her allies seems to have been the last straw in the generalsâ€™ historical relationship of convenience with Mugabe.

Now that the relationship has soured and Mnangagwa is reportedly back in Harare, the army could be lobbying for another unthinkable: Mugabeâ€™s (eventual) exit and Mnangagwaâ€™s possible reinstatement. As much as many of us are desperate for change, Zimbabwe is no country for a bloody coup or a prolonged power struggle. The nation has suffered enough under Zanu PFâ€™s tyrannical rule â€“ aided and abetted by Mnangagwa and Chiwenga â€“but for now whichever way things go the country has been changed forever by last nightâ€™s events. Even if Mugabe scrambles back to power or one of his former war comrades assumes power – possibly Mnangagwa – Zimbabwe as we know it has changed in the most unthinkable way.