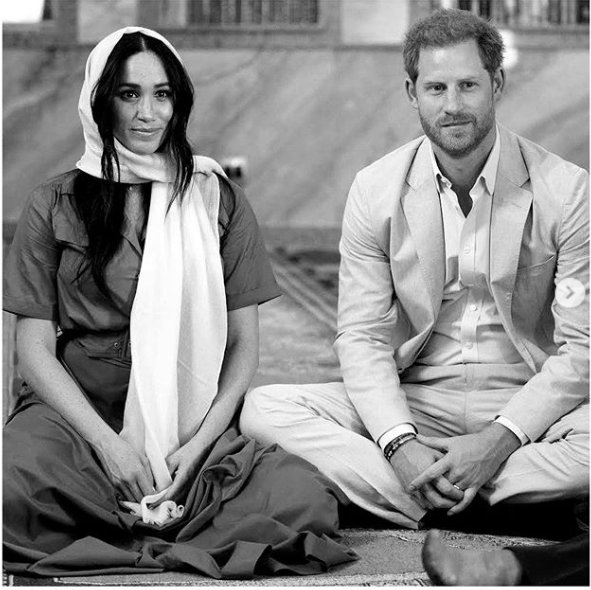 Petra Diamonds Limited on Monday announced the discovery of a big blue diamond. The mining company confirmed that 20.08 carat blue diamond had been discovered at Cullinan Diamond Mine on their Facebook page. That very same day, the Duke and Duchess of Sussex arrived in South Africa. Coincidence? FATIMA MOOSA and SHAAZIA EBRAHIM think not.

The well-known retired actress Meghan Markle and her ex-soldier husband Harry Windsor touched down in South Africa on Monday. Their first stop: the European city of Cape Town. South Africans were supposedly beside themselves with glee. If you opened any paper, the pages were plastered with the couple smiling and posing with African children, as one does in these parts. But we know why they’re really here. Unemployment is real, guys.

Markle used to act in the American law drama Suits and tied the knot with Windsor in April 2018. Given that Windsor belongs to the British monarchy, there was quite the uproar (which was not as dramatic as it sounds given the stiff upper lip of the British). Markle was not suitable for Windsor, being American AND mixed race. *gasp*

You know how the British can be.

After having baby Ntsika to remain relevant, the three have deigned to visit the deep, dark hole that is Africa. They say they’re here to tour southern Africa, visiting townships and areas suffering gang violence. Maybe they’re overcome with guilt after the pillage, and plunder that was colonisation but we doubt it. They still haven’t given back the South African diamonds in the Queen’s crown jewels.

And let’s be real. If they gave back any of their wealth accrued from years of colonisation, torture, murder, and stealing they’d be poor AND unemployed. Then they’d really be irrelevant in the capitalist world economy.

In all the excitement, we followed the Royal Instagram Page and captioned the photos appropriately. #YayColonialism

The unemployed pair touched down for their visit which would be focusing on “community, grassroots leadership, women’s and girls’ rights, mental health, HIV/AIDS and the environment.” Harry can be seen telling the little kid that with hard work and determination, he too can be a prince one day. Of course without any sense of irony.

Today in the latest #hijabigoals to hit the streets, Meghan rocked the headscarf and modest fashion to visit the Auwal Mosque. The very mosque which stands as a “symbol of the freedom of former slaves to worship.” Yes, you know it’s not as if the Royal Family know anything about slavery and curbing religious freedoms and all that. It’s totally not British, right?

“I’m trusting you to take down the monarchy from within, little Ntsika. Carry forward this meeting as an inspiration,” said Archbishop Tutu as he laid a soft kiss on the royal spawn’s forehead. It was baby Ntsika’s first public appearance. Something we’re sure the South African public was thrilled to be blessed with.

“It’s so important that we’re able to share what’s worked for our family and know that we’re all in this together with each other. So we wanted to share something from our home to each of yours,” said Markle. In true suburban South African mom style, she donated a few of Ntsika’s old clothes to the children at the center. Hey, we stan people who recycle! (Even if they could probably buy a few stores out).

What do you say, South Africa?