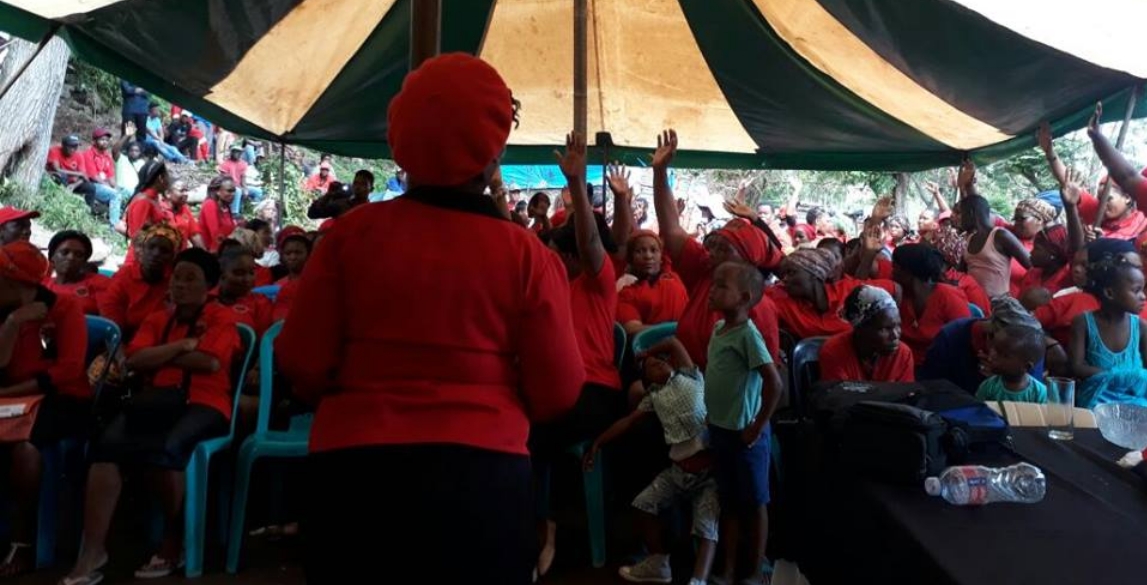 On the 11th of August at least 500 women members of Abahlali baseMjondolo filled the Prince Edward Hotel in Durban to celebrate Women’s Day. Dressed in red and black, their bold printed T-shirts read: “Izindlu. Umhlaba. Is’thunzi” (Houses. Land. Dignity). Many of the women, are unlikely activists and are mainly from an older generation. Middle-aged women danced freely and sang along to struggle songs with passion and purpose cementing their commitment to their cause. By NOMATTER NDEBELE.

The women of Abahlali baseMjondolo strongly believe that they play an integral role in changing their communities and South African society more generally. “One day this country will be run by a woman, with or without the permission of men,” said  former chairperson of Abahlali Women’s League, Alice Caleni.

Abahlali a grassroots social movement, calls for the protection of land and housing rights for poor black people across South Africa. The name Abahlali baseMjondolo literally means “occupiers of informal homes”. A large majority of the organisations advocacy therefore focuses on people living in shacks in informal settlements. To date, the movement has 58,000 members of which 60% are women.

Abahlali’s Women’s League believe that while many people live in poverty, it is women who are hurt by it the most. Women’s experience of poverty is further compounded by issues of domestic abuse, discrimination and a general disregard for the needs of women throughout society. These issues were all focuses of the discussions at the Women’s Month celebrations.

Since 2005, the Abahlali has campaigned against evictions and called for land, adequate housing and access to basic services such as electricity and water. The movement has been in a long battle with the eThekwini Municipality, and after 19 years, the struggle continues.

Sometimes represented by public interest law NGOs including the Socio-Economic Rights Institute, Abahlali has frequently claimed its housing rights in South Africa’s courts. This includes a victory before the Constitutional Court.

Members of the movement painted a bleak picture of the eThekwini Municipality in 2019, saying that it is in “ICU”, underperforming and not providing basic services to the people of eThekwini: its core constitutional function. Moreover, the movement lamented the fact that despite being a woman, eThekwini Mayor Zandile Gumede had not shown an understanding of the struggles that women living in poverty face. (Editor’s note: Gumede has since stepped down as she faces corruption charges.)

On the contrary, in fact, “The mayor has caused us to distrust each other, when we should be united in our struggle, we are tired of people who do not hold the interests of the poor,” said Caleni.

Caleni also spoke about the blatant imbalance of societal power dynamics, saying that women were overlooked in every sphere of society and made to feel as though their contribution to society was insignificant and ultimately meaningless. She cautioned the women about this and pleaded with them to view themselves in a higher regard. “Your contribution to this struggle is far from insignificant,” she said.

As a movement, Abahlali is phenomenal. For 15 years the group has remained focused on the development of one of the most marginalised groups in South Africa, and for the most part, the movement has refused to align with party politics of which they are extremely distrustful. Their core focus, has remained unchanged, their mandate is to advance the interests of the poor. They have done so despite harassment from police and local politicians, as well as assassinations and threats made against their leaders and members.

Unfortunately, this is not a problem that is exclusive to the Abahlali, and is increasingly an experience common to grassroots social activists claiming their socio-economic rights across the country. Over the past few years, in South Africa as elsewhere in the world, there has been a clamp down on activists across various causes and contexts. Many activists have reported cases of abuse at the hands of law enforcement.

It is not an exaggeration to say that there has become a worldwide attack against human rights defenders, across the globe. Hundreds of human rights activists are brutalised by state and law enforcement agencies for doing no more than claiming their human rights and a process to protect them under the rule of law.

Now more than ever, organisations that work to defend human rights activists have had to work overtime to protect the ideals of democracy, freedom of expression and the right to protest. The International Commission of Jurists (ICJ) is one such organisation. Working in collaboration with the Southern African Human Rights Defenders Network, it has begun to try raising the profile of groups like Abahali throughout Africa and internationally with the hope that this will provide Abahlali members with greater protection.

“Movements like Abahlali are central to the vital struggle for the protection of the rule of law and the achievement of social justice for all in Africa. They must be able to claim their rights without fear of persecution,” said Arnold Tsunga, ICJ’s Africa Director.

At the event, the Abahlali Women’s League also elected the new Executive Committee for the KZN Province. Zukiswa Gqobhoka was elected as the chair of the executive group. Undertaking her oath, alongside six other executive members, Gqobhoka promised the women in attendance that she would not only be a leader, but also a servant of the people and the Abahlali movement.

As the meeting split up and the women went their own ways to their homes in informal settlements in KwaZulu-Natal, and Mpumalanga ,Thoko Nomvelo, the incoming Deputy Secretary General of the AbM Women’s League reflected on the day’s proceedings: “Women don’t have shelter for themselves and their children. Women don’t have jobs or money to send their children to school”.

She concluded: “Abahlali advises women on how to care for themselves, their relationships, their families.”

Long may it continue to do so.

Nomatter Ndebele is a freelance writer.