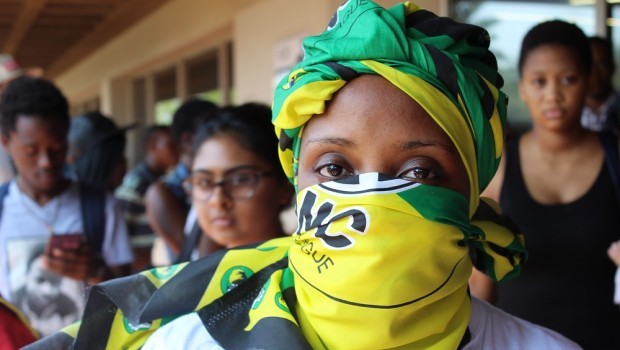 Nomboniso Gasa, a stand-in presenter on Radio 702, recently shut down a radio interview with Wanelisa Xaba, a spokesperson for UCT student movement Rhodes Must Fall. Xaba had objected to the paternalistic and bullying manner in which Gasa corrected her on an alleged misrepresentation of the history of the ANC. HUGH MACMILLAN and LUCY GRAHAM argue that debates about the conduct of the interview detract from the historical issues discussed.

Xaba received a great deal of support from listeners to the programme, who phoned in, and on social media. Vashna Jagarnath rushed in to defend Gasaâ€™s conduct of the interview, claiming it was an example of “rigorous debate”, and also launched her own attack on Xabaâ€™s advocacy of black love and humanity, comparing her ideas with those of Hindu fundamentalists â€“ a strange comparison as UCTâ€™s Rhodes Must Fall seems to us to be more aligned with students in India protesting against the Hindu nationalist movement, and Rhodes Must Fall in Oxford openly supportsÂ the students protesting in India.

It is not our role to defend Wanelisa Xaba or Rhodes Must Fall. They are well able to defend themselves. But the debate about the conduct of the interview, and even about black love and Hindu essentialism, has diverted attention away from the historical issue. The debate was killed when Gasa intervened to correct Xaba who was arguing that in contrast to the PAC, and Steve Biko and the Black Consciousness Movement, the ANC had advocated “multi-racialism”. Gasa interrupted her to argue that the ANC had never been “multi-racial” and had always been “anti-racial” and/or “non-racial”.

Historically speaking, Xabaâ€™s statement that the ANC was multiracial is completely valid.

From 1912 to 1969 the ANC was in practice open to Africans only. From 1953 to the mid 1960s the ANC was part of the “multi-racial” Congress Alliance â€“ the other members of this alliance were the old-established SA Indian Congress, the SA Coloured Peopleâ€™s CongressÂ (SACPC)Â and the SA Congress of Democrats Â for whites only, which were both set up in 1953.

The Freedom Charter was adopted in 1955 at the Congress of the People in the name of the multi-racial Congress Alliance. The charterâ€™s opening statement “that South Africa belongs to all who live in it, black and white,” was contentious because it emerged out of this multi-racial alliance, and this prompted the break-away of an “Africanist” group in 1958 which formed the Pan Africanist Congress (PAC) under the leadership of Robert Sobukwe in April 1959.

After the banning of the ANC in 1960, Umkhonto we Sizwe (MK), was set up in 1961 as a nominally autonomous joint venture of the ANC and the South African Communist Party (SACP). It was a “non-racial” organisation which, like the SACP, but unlike the ANC itself at the time, was open to people of all “races”.

The Congress Alliance never really functioned in exile and the exclusion of whites, coloureds and Indians from the ANC in exile became increasingly anomalous in view of the non-racial membership of MK and the fact that a few coloureds, Indians and whites, as well as many Africans, were serving long prison sentences in South Africa for MK involvement.

It was not, however, until the Morogoro Conference in April 1969 that the ANC opened its doors to coloureds, Indians and whites. Even then the top three leadership positions, and membership of the National Executive Committee (NEC), was reserved for Africans. The ANC only became wholly “non-racial” at the Kabwe Conference in 1985 when these positions were opened to people of all “races”. Two Coloureds, two Indians and one white person were then elected to the NEC.

As stated above, the PAC was indeed based on the rejection of the Congress Alliance and of “multi-racialism”. That said, Robert Sobukwe is often quoted as claiming, “there is only one race, the human race”. Although it was often seen as more racially exclusive than the ANC and it never embraced “multi-racialism”, the PAC in exile opened itself to South Africans of “other races” before the ANC â€“ accepting its first non-African members in 1963. Indeed some leaders of the SACPC, including Barney Desai, joined the PAC in 1966 precisely because the ANC would not allow them membership.

It is unfortunate that Radio 702 debate on Rhodes Must Fall was “killed” prematurely as a result of Gasaâ€™s, not Xabaâ€™s, misunderstanding of history.

Authors’ note: Non-racialism is a great ideal, and of course there is no scientific basis for racial categorisation, but racism has left a historical legacy that is often erased when people today talk about non-racialism. It is unfortunate that those who draw attention to this legacy are often then branded “racists” or asked “why can’t you stop talking about race, there is no such thing as race.”

Hugh Macmillan is a historian and a research associate in the African Studies Centre at the University of Oxford.

Lucy Graham is a Postdoctoral Research Fellow at the University of the Western Cape. Both are writing here in their private capacities.