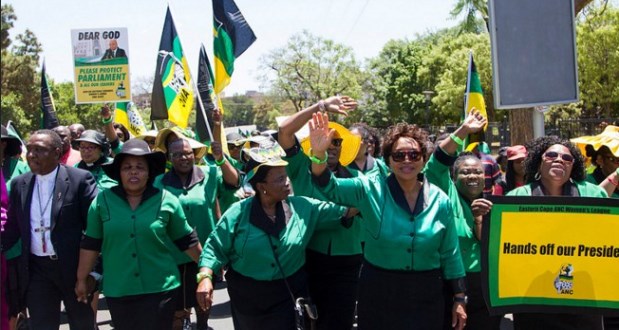 The ANC Womenâ€™s League should be advocates for justice for women. What else would be the point of a Womenâ€™s League, right? Yet, their public utterances often make them sound like female proxies of powerful men. AAISHA DADI PATEL rounds up some of the most un-feminist things the ANCWL has said and done.

According to their website, when women were allowed to be a part of the ANC, their primary role was to be the custodians of men. â€œEven if the ANCWL activities gave them a new standing among ANC men, women still found themselves in a disadvantaged situation: they lacked skills and education; they were responsible for their children and their households; and the traditional image of women as weak, dependent creatures hampered the real involvement of women in the ANC structures and policies.â€ Although the ANC accepted the attribute “non-sexist” in its vision for a new South Africa in 1984, the Womenâ€™s League doesnâ€™t seem to have changed course.

March 31 statement on the ConCourt ruling

After the Constitutional Court ordered that President Jacob Zuma pay back the money that he used for the construction of his Nkandla homestead, many people came out to indict the president and call for him to step down. Not the ANCWL, however. They stood firm in their support of him.

â€œOur faith and support for President Jacob Zuma remains unshaken and have full confidence of the nation’s development under his leadership.â€

A strong woman stands by her man, because that’s what a real Queen does when the world rips him apart. #ANCWL

After members of the ANCWL demonstrated nude because they were unhappy with a decision taken at a branch meeting in Hammanskraal, the organisation immediately slut-shamed them and called their actions â€œin bad tasteâ€ a display â€œof moral decayâ€, and â€œAnti-ANCâ€. The women were also shamed for not ascribing to the hegemonic standard of women in society.

â€œThe African National Congress Women’s League (ANCWL) is appalled by the behavior of women who demonstrated their grievances and stripped naked at the ANC Tshwane Regional Offices yesterday. The demonstration was in bad taste and displays a moral decay that emanates from foreign tendencies within the ANC such as factionalism and clique politics. As the ANCWL we are disappointed by this behavior and it’s Anti-ANC. Members of the ANC should display discipline, lead society and not initiate unethical acts of indecent exposure. Women must always carry themselves in an exemplary manner in society.â€

January 8 statement on the sexual harassment charges against Marius Fransman

After Western Cape ANC leader Marius Fransman had sexual harassment charges brought against him after an incident at the partyâ€™s 104th birthday celebrations in Sun City in January, the ANCWL released a statement in which they pledged to believe that Fransman was innocent until proven guilty – despite the fact that the victim had come forward and described the traumatic and devastating effects of the incident on her.Â

â€œWhilst the ANCWL supports and stands with the victim, it respects and has confidence in the Justice system to protect the women of this country…However we acknowledge the constitutional rights of the alleged offender of being innocent until proven guilty.â€

Reiterating their support of Zuma – despite the controversy around his previous treatment of women (see comments made during his 2008 rape trial) – the ANCWL led a march to the Union Buildings at the height of the student protests in 2015 calling for â€œhands off Zuma.â€

â€œWomen reaffirm the leadership of President Zuma as the champion of the revolution. The leadership of the movement leading the National Democratic Revolution is represented by the face of its President, therefore, by virtue of this fact he is the human face of our revolution. The ANCWL, therefore, regards any attack on the President as an attack on the Revolution and the Organisation – The African National Congress.

We, therefore, stand firm in saying “hands off President Zuma” as the leader of the Organisation and father of the Nation, in defense of the National Democratic Revolution.â€

After Oscar Pistorius was convicted of culpable homicide, the ANCWL came out in condemnation only to some extents, not criticising the system that still kind of protected him.

â€œThe ANCWL voices its disappointment on the outcome of the Correctional Supervision and Parole Board (CSPB) of approving the placement of offender Oscar PISTORIUS under correctional supervision as from the 20/10/2015.

However, we respect the processes that ensured equality for all regardless of popularity, having money, being a man or woman. We commend Minister Masuta for ensuring that processes are followed properly…We pin our hopes on the SCA to repeal the judgement and that Oscar must serve a sentence that would bring him back a changed man and an advocate for women’s rights in future.â€

Backtracking on previous calls made to abolish virginity testing and ukuthwala

In August last year, the new leadership of the ANCWL rescinded its earlier calls for the abolition of cultural practices like ukuthwala and virginity testing, saying that peopleâ€™s beliefs, cultures and choices should be respected. What about the rights of women to bodily integrity and privacy, though?Â

Whatever the ANCWLâ€™s priorities are, they don’t really seem to make sense to those concerned with advocating for justice for women. And some women wonder, when will the organisation deal with more pressing, grassroots issues?

can we please get ANCWL to march about the high prices of sanitary towels/tampons, it’s tough for us women Thixo!