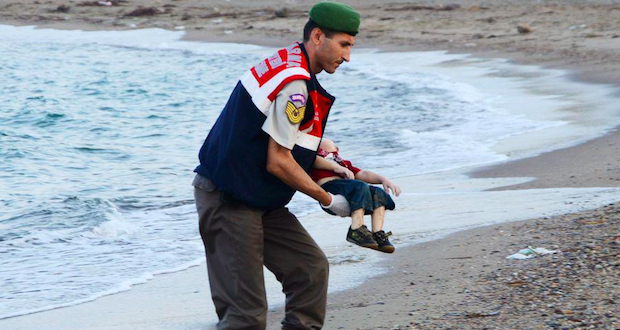 Is there any pointÂ in sharingÂ the image of theÂ little boyÂ who drowned in the Mediterranean, after his parents made a perilous bid to enter Europe? ATHER ZIA says that if we are to pay tribute to him, we must share his picture, not censor it.

Since yesterday, my social media newsfeed has been replete with images of the tiny lifeless body of Aylan Kurdi, the three-year-old Syrian boy who washed ashore on a Turkish beach.

After being refused asylum by the Canadian government, Aylanâ€™s family was headed to the tiny Greek island of Kos with other refugees when the boat capsized. Aylan drowned, along with his mother and his five-year-old brother.

‘My children slipped through my hands’: Syrian father of drowned boy http://t.co/IHmn2cdXTa pic.twitter.com/QGC9bTMBvR

On one hand, Aylanâ€™s picture has brought many disparate but well-meaning voices together to rally support for Syrian refugees. Whether it will yield fruit remains to be seen. On the other hand, many people are enraged about the social media proliferation of Aylan’s image. One voice opined, “Would you share the picture of a dead body of your own child?”, another one roared in caps lock, “Show some sensitivity.â€ Yet another descended into a longwinded, oft-repeated spiel about violent images in popular culture and our mass desensitisation, reminiscent of syllabi for a media 101 class.

I agree that all is fair in the arena of personal opinions and that images can do violence to the dead and the living. I also acknowledge being a mother, which makes me as vulnerable as any parent when thinking about a child suffering. Aylan’s picture could be my boy when he was a toddler – sleeping on his tummy or dead at an idyllic beach. If my boy were to drown due to personal negligence or some other quirk of nature, I would not post his picture since my grief would be private.

The gaze of the middle-class behind the computer monitors often buys into the bourgeoisie-ordained politically correct versions of which violence to show and which to ignore. This has become a handy prop to propagate unjust politics.

Remember Abu Ghraib? Until the pictures of the torture and abuse of prisoners there seeped into the American and global consciousness, it was just another organic event in the “liberation” of undemocratic savages.

In context of sharing images of death and deprivation, sometimes we have to change our politically correct behaviours to contribute to change, even if we are still behind our monitors.

An old anthropology professor once said that everyone stands naked at some point during the day; insanity manifests in whether we choose to do it in public or in private.

In the mayhem of unjustified wars fueled by the rampant consumerism of the privileged nations, our display of an innocent childâ€™s dead body is abhorrent. But with all due respect to anthropological truisms, in order to stay sane, we sometimes have to go naked in public.

Ather Zia is a journalist turned anthropologist. She is a poet, writer and faculty member at the University of Northern Colorado. She is the founder and editor of the Kashmiri literary magazine, Kashmir Lit.