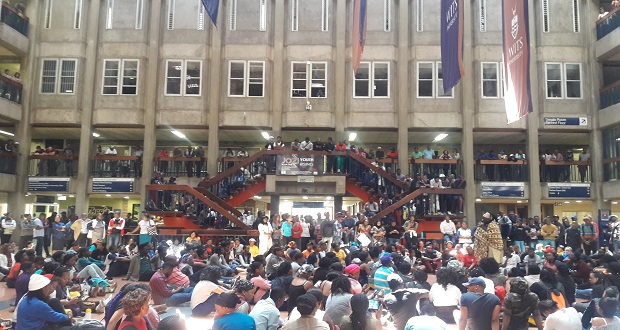 This year’s Fees Must Fall protests have been characterised by violent altercations between protesting students and private security or police. Â But there’s a whole lot more that goes on behind the scenes of mass student movements. The Daily Vox spoke to some students about what it takes to co-ordinate Fees Must Fall at Wits.

Far beyond the camera lens and in the echoes of struggle songs, protesting students at Wits University say organising a movement has many complexities. The legwork that goes into building a movement of this nature does not only operate on the level of protest alone. Inside empty lecture halls and tutorial rooms are task teams responsible for â€œproviding an environment where students feel safeâ€.

On days when protesters have organised mass marches from Braamfontein to Parktown and back, there are individuals distributing fruit and water among the crowd. Meals are distributed to protesting students after marches and meetings held in the evenings. Anzio Jacobs says his task team is about being able to nourish the students who come to the protest. Anzio Jacobs, BA student, Love and Logistics task team
[dropcap]â€œ[/dropcap]A lot of the students are coming from far off or they are at the university protesting without having something to eat. We co-ordinate funds through the different task teams and we try to make effective use of those funds so that we can supply students with meals, medical supplies, information through the media task team, tampons and sanitary pads etc. We provide food through donations coming in from the public and we also try to maintain order by cleaning the campus and mopping the floors. We feel it’s important that if our mothers and fathers can clean the toilets, then so can we as students. Our team is surprisingly made up of men who do the cleaning. We do have many women comrades in the space as well but it shows that our team does not function off of stereotypical gender politics.â€Â

Despite the ongoing legal risks of arrest, suspension and expulsion for participating in the Fees Must Fall protests, students say they will continue protesting because the law does not guarantee justice. It helps to have a team that understands the law, though. Sihle Booi, LLB student, Legal task team
[dropcap]â€œ[/dropcap]We first looked at the interdict which disallows any unlawful protest. Soon after, the school responds in a manner that disallows any form of protest. We know that the interdict is unconstitutional and that our protest is lawful. We find the university’s response unconstitutional so we are challenging the infringements of our basic human rights. The university forgets that we just need to give them notice of how we want to exercise our right to protest, and we are not asking for permission. This is what our lawyers say to the police when arrests are being made. We have also delegated two people with cars to follow arrested students. We also educate students about what an unlawful arrest is and the procedures that must be followed. The legal team will not tolerate injustice because the law says so. If the law is unjust, it is not law.â€

Students at the university decided to ignore Minister in the Presidency Jeff Radebe, who said on Tuesday, â€œLaw enforcement agencies, who are acting within the confines of the law, will leave no stone unturned in finding those responsible for the criminal activities witnessedâ€. Any student who was among the gathering protesters was shot at, whether they were seen protesting or not. Leonard MuhangoÂ told us how a woman who wasnâ€™t even protesting was injured by the policeâ€™s Tactical Response Team. Leonard Muhango, Medical student, First Aid task team
[dropcap]â€œ[/dropcap]A girl who wasnâ€™t even protesting was injured by a security official with his riot gear which caused a 5cm laceration on her scalp. Our role as first aiders is to stabilise injured students in collaboration with Campus Health because we are not yet qualified. The team was formed when the securities started throwing stones at students. We had a day of training with our professor on the kinds of injuries we were likely to encounter and how to deal with stun grenades. We also ensure that those who have been critically injured go to hospital. Tuesday was a chaotic day because the line at Campus Health was long. I cleaned and dressed 15 injuries caused by rubber bullets even though I was injured myself. And that was just me, there are more than 20 other first aiders.

Another medical student we spoke to was more concerned about the psychological effect that violent confrontations had on the first years who are far way from home. Mthwakazi Bula says most of the students who have been hit by police brutality are actually first years whose parents were reluctant about their participation in the protests. Mthwakazi Bula, Medical student, First Aid Wellbeing Component
[dropcap]â€œ[/dropcap]There is a lot of psychological trauma that black bodies experience in these spaces. We had to be there as a support system. We organised counselling, we visit them in hospital, and we assist in paying medical bills through the donations we receive. Even the arrested students experience trauma. We have a team of psychology students who have been trained by volunteering community psychologists on how to look out for symptoms and what to do. We have debriefing sessions in the evenings at the Disability Unit. Students can find us on our Facebook page called Wits Fees Must Fall Health & Wellbeing and we have a hotline where people can contact us on 079 276 3519. People have been calling us late at night because they can still hear stun grenades and they say everything that makes a noise startles them.â€

It is not often that we hear these stories about how students assist each other during protests. Bula, who is also part of the Media and Communications task team, spoke to us about media coverage of Fees Must Fall protests.

[dropcap]â€œ[/dropcap]I also joined the media task team because I thought it was important to take back the narrative. Especially over the past week, we noticed that mainstream media has really taken a turn to reporting us as violent and criminal. We felt that that was taking way from the real stories and why our struggle is important. So our job now is to pick up from the team that was started last year. It’s inaccurate to report on us as if we are not working on a model or that we donâ€™t want schools to reopen. We want stakeholders to come to the table before that.â€

Phethani Madzivhandila said many struggles have been lost due to a lack of education and ideological training. He told us about Kwame Nkrumah and Thomas Sankara, whose revolutions failed after they were attacked because there was no critical mass to defend the revolution. He described the importance of using political education to conscientise the masses. Phetani Madzivhandila, Metallurgical Engineering student, Political Education task team
[dropcap]â€œ[/dropcap]Our task team is meant to exhaust the question of our politics, strategies and tactics because as of now, we realise that we as black people have been on the picket lines for over 500 years to regain our humanity. What we lack is organisation, political education and a dedicated revolutionary cadre. Our solution is to have a critical mass that will defend the revolution when our leaders are being attacked. We want to create a revolutionary cadre who is conscious of the dynamic discourse we are engaged in. We cannot run a revolution without political consciousness. We have organised a political school to exhaust what we mean by a free decolonised education. It will be run like a sermon in church and a conversation between people. Those who are conscious are making sure that the mass is at the same level as the leaders. If we are leading people who are not aware of the political dynamics we are involved in, then we are going into a trap and we are bound to into the pitfalls.â€

It is unclear how many task teams there are in total or where they operate from, but there is so much more that happens on the ground that keeps the students going. In between the violence, the injuries and the rhetoric, an organisation is emerging among the student protesters.