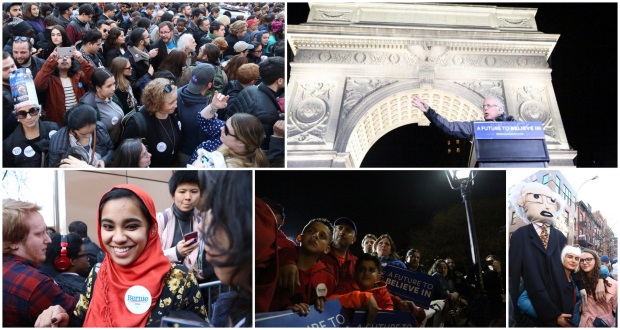 IfÂ Bernie Sanders pulls off an upset victory against Hillary Clinton in the New York Democrats primary on Tuesday, he has the stateâ€™s young voters to thank for it.Â TED REGENCIA tells us more.Â

On Sunday, Sanders drew a record crowd of more than 28,000 in Brooklynâ€™s Prospect Park. A son of Jewish immigrants from Poland, Sanders was born and raised in Brooklyn. Like singer Jennifer Lopez, Bernie is also from the block.

A few days earlier at Washington Square Park in lower Manhattan, Bernie, as he is affectionately referred to by supporters, also attracted about 27,000 people, eclipsing the 20,000 who attended Barack Obamaâ€™s rally at the same venue in 2008.

I was curious about whatâ€™s driving Sandersâ€™ supporters, and why they are â€œFeeling the Bernâ€. So I skipped the Rockefeller Center tourist trap, and showed up at Washington Square Park instead. It was still three hours before Sanders’ scheduled speech, and the people waiting to pass through the security scanner already filled the streets around the park next to New York University. Students and some professors racing to their next class had to beg the crowd to allow them to go through.

An elderly woman in pearl earrings, wrap-around sunglasses and a cardboard hat with an image of Sanders looked solitary in a sea of young, mostly white faces, who were busy Snapchatting and checking their Instagram and Facebook feeds. Every time the queue moved an inch forward, the throng would break into chants of, â€œBernie! Bernie!â€ News helicopters hovered over Greenwich Village, while police posted every few metres kept an eye on the throng of people. One attendee brought his dog with him, while a mother-and-daughter tandem carried a life-size effigy of Sanders.

During the nighttime rally that was part religious revival and part music fest, the band, Vampire Weekend, warmed up the crowd who shivered as the temperature dropped. Film director Spike Lee even showed up.

Linda Sarsour, a 36-year old Palestinian-American activist, said sheâ€™s supporting Sanders because â€œhe is unbought and unsoldâ€. Sanders â€œworks for the peopleâ€ instead of the powerful corporate lobby, she said, speaking not too far from New Yorkâ€™s financial capital.

As he took to the stage with his wife, Sanders roared, as he spoke out against â€œgreedâ€ on Wall Street and called for $15 an hour minimum wage, a theme favoured by his supporters in the labour industry.

Several times during his speech, chants of â€œBernie! Bernie!â€ interrupted Sanders’ speech, and he relished every moment of it, giving him pause as his voice grew hoarse. â€œIf you want a candidate who stands up to big money interest and take on the greed of corporate America, we need your help,â€ Sanders said, standing at an open-door stage framed by the Washington Square Arch, a marble monument modeled on the Arc de Triomphe in Paris, and dedicated to the first president of the US, George Washington.

Sanders then continued his vow to break up â€œtoo big to failâ€ banks, which he blamed for the collapse of the US economy in 2008. But one of his most-applauded lines was his call to end the federal ban on marijuana. He also said that it is unjust for many young people to have criminal records for smoking marijuana, while bankers, who caused financial institutions to collapse, were left unpunished. As his supporters chanted their approval, strong smell of weed wafted through the air in some pockets of the crowd, while smoke rose visibly into the cold night.

With Hillary Clinton, a former senator from New York, still leading in the polls in the state, Sanders acknowledged that the primary â€œis a tough raceâ€. But he said, â€œI think weâ€™ve got a surprise for the establishmentâ€ on election day on April 19.

Further up Fifth Avenue, the green and blue lights from atop the Empire State building glimmered as Sanders wrapped us his hour-long speech.

The next day, I chanced upon a Hillary volunteer standing outside the gate at Columbia University handing out flyers. I told her about the Sanders rally the night before, and asked if Hillary is also holding a similar event to counter Bernie. She said with a knowing smile, â€œLetâ€™s admit it, Hillary canâ€™t get that kind of a huge crowdâ€. But also said sheâ€™s confident her candidate will win.

Story and images by Ted Regencia, reporting from New York