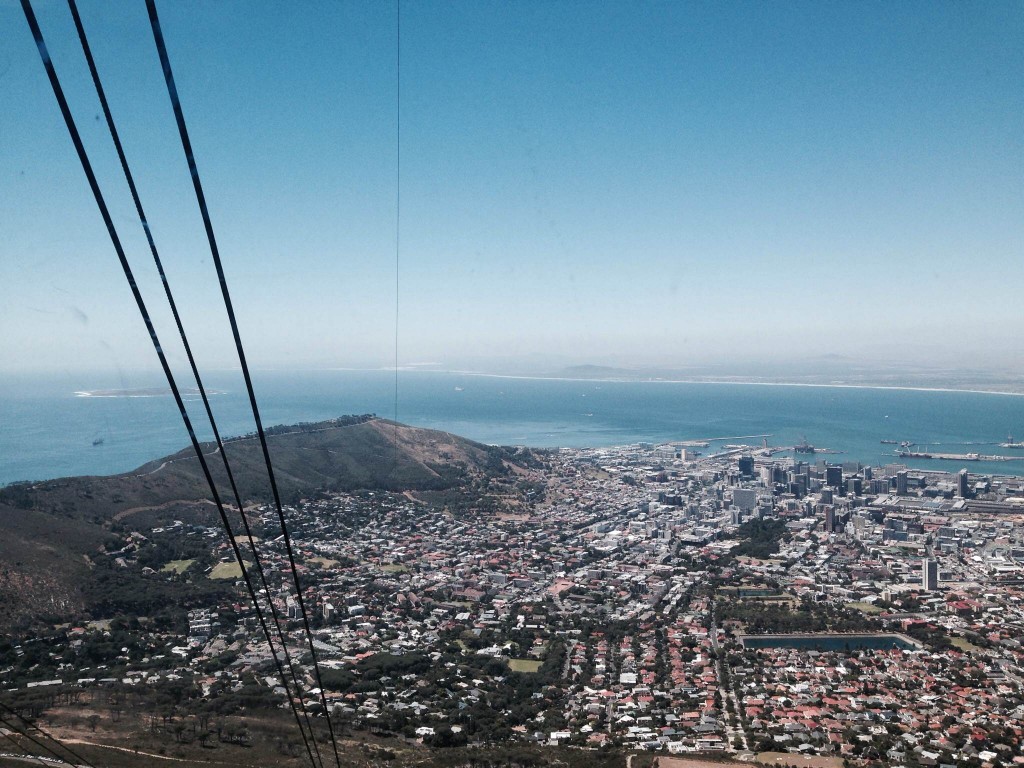 BIBI AISHA WADVALLA reflects on the two tales of a city, Cape Town and its contradictions.

The mountain recedes as Lungile (the cameraman) and I drive out of the city centre and get onto the N2 towards Philippi, one of Cape Townâ€™s largest townships.

The road to Philippi is lined with RDP houses, and then shacks further along. The highway is separated from the housing settlements by a fence against which portable toilets stand. I despair at this ultimate indignity, but I’ve long resigned myself to accepting that government will not change these conditions. A pedestrian runs across the highway, causing Lungile to brake. I’ve seen children do this too. It’s easier than walking the long distance to the footbridge.

Arriving in Philippi is like arriving in any other township. Shacks hustle for space, spilling out onto pavements. Children play with sticks in the dusty environment. Adults lounge outside hair salons and tuckshops. Dogs weave between the human traffic. Here, life’s breath heaves and wheezes.

At Sinethemba High School, a voter registration station, political parties have set up camp. The ANC has the largest presence, and is the most vocal. Competing with the blaring music, a man with a loudspeaker stands on the bed of a bakkie, exhorting people to vote for the ruling party. EFFâ€™s red beret brigade consists of just two subdued young men. Three middle-aged women front the Agang stand. There’s a lack of energy on their side too. The DA is noticeably absent.

Inside, about 20 people trickle in to register – a few young men, mostly older women. Predominantly, the ANC is mentioned as the party to vote for.

Upstairs, 450 learners from various schools are sacrificing their weekend for extra lessons. Six hours each of maths and science lessons acrossFriday afternoon, Saturday, and Sunday morning. Without it, some would fail, while others will get average grades, not enough to earn a university bursary.

After Philippi, we head to another registration station. Driving towards Cape Town, the mountain looms, and the harbour sparkles before us. The landscape speaks of hushed wealth – the multinational hub in the foreshore, trendy Cape Quarter and Green Point, the monumental stadium. And then we’re in Sea Point, our destination. It’s located along the Atlantic Seaboard, a remarkably beautiful area, with the ocean in front, and the mountain range behind. Here, life’s breath is a gentle inhale and exhale.

As we park, a couple arrive in a luxury convertible. In Philippi, people arrived on foot.

Lungile remarks, “No matter what you think, you have to admit these people still have everything. Ai, but it’s nice here.”

I feel a twinge of guilt. Am I one of â€œthese peopleâ€? I live down the road from the school, along the promenade.

Outside the gates, a lone DA campaigner sits, a black man in this predominately white area. Here there is no ANC, Agang or EFF. In the hall, eight people have come to register. Their vote is going to the DA.

And so my snapshot view tells the tale of two districts voting according to race, and class.