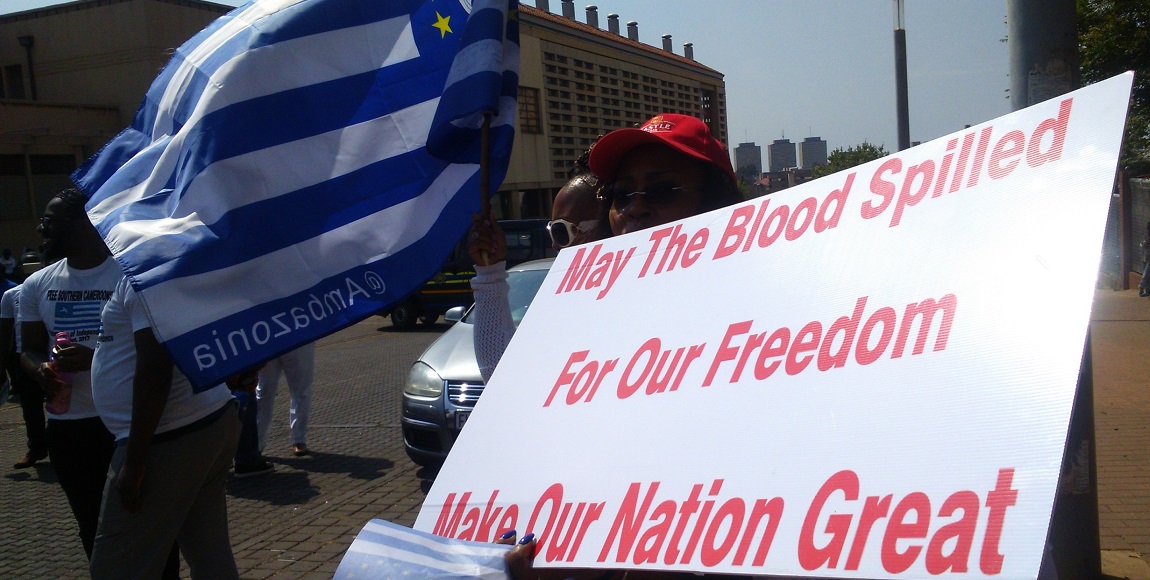 The struggle of the people of the English-speaking region of Cameroon made international headlines again last month when seven activists received prison sentences, ranging from 10 to 15 years, after being found guilty by a military tribunal in the capital Yaounde of terrorism and other charges. In 2016, a separatist movement was reignited in the two Anglophone regions because of the increasing repression of the English language in the education and judicial system. Two years later, the situation in much worse with English-speaking Cameroonians fleeing across the border into Nigeria and even more brutal military clapdowns. The Daily Vox spoke to Millan Atam, chairperson of the Southern Cameroonians Congress of the People (SCCOP), who is currently in exile in South Africa escaping arrest by President Paul Biya’s regime, about the current situation in the Anglophone region – the country of Ambazonia.

President Paul Biya has said he’s willing to hold dialogues with the Anglophone region. Have there been any dialogues between the two regions and what is the current situation like in the Southern Cameroons?

There is a deliberate policy and system that has been put in place by Mr Biya which is not only with the intention of annexing and occupying our territory, but systematically eradicating our people through this genocidal action that he has taken. What we are experiencing in our country right now is black-on-black colonialism. Mr Biya has never done anything in good faith. When he was sent back to Cameroon by the French authorities in 1962, it was not to come and build a nation. It was to come and consolidate a plantation for French interests and that is what he has been there for for the past 34 years. By saying that he has ‘called for dialogues’ – remember that Mr Biya, in November last year, actually declared war on our people on record officially. For somebody who comes and declares war on the people, turns around and says he wants dialogue, there is going to be no dialogue. He is not interested in dialogue.

Mr Biya put in place his ministers and prime ministers to hold dialogues with our teachers and our lawyers in 2016. But on 17 January 2017, while they were on the negotiation table, the teachers and the lawyers left the table, went back home, and that same evening Mr Biya sent his military to go and capture all of them and put them in jail. Many of them stayed in jail for eight months before being released, while the others have been in jail since the 17th to this day. Last week many of them were sentenced, some for 30 years others for 15.

The same people who went out to the streets to march peacefully and to register their displeasure with the system, who were sitting at the table with Mr Biya’s representatives and negotiating were arrested and jailed because they believed in the good faith of Mr Biya’s words. Now the same Mr Biya who is talking about dialogue is the one who has recently sent his military to shoot at our people.

In fact, the American ambassador to Cameroon, last week or two weeks ago, actually came out and made very clear officially that the American government recognises and registers the fact that Mr Biya is carrying out targeted killings and repression, and brutal killings of our people. In one of his earlier statements he said “both sides” but then he came back and clearly stated that Mr Biya regime is responsible for targeted killings and the position of the American government is for Mr Biya to step down.

You may have heard recently there has been the declaration of a humanitarian crisis. Over 160 000 of our people across the border in Nigeria have been officially recognised. We have a whole operation and our estimation is that we have close to 500 000 of our people externally displaced. Internally we are counting a further 500 000 or so. If you consider that Mr Biya’s forces have attacked and raised at least 75 villages with an average of about 67 000 people in each village, most of those people have fled to the forest. They are sleeping in open air forests with snakes and insects; cholera, malaria, and typhoid.

With the Francophone government clamping down hard on resistance, what is the next step for the Ambazonian separatist movement?

We have just completed one year of the struggle internally. The one year was to build capacity internally to resist Biya, educate our people, and build social cohesion which we have done. 1 October 2017 convinced everybody without a shadow of a doubt that about 99.9% of our people want separation from French Cameroon, when millions of our people went out onto the street to protest against Mr Biya’s brutality and declare their independence from French Cameroon.

From this year and into 2019 we are in the process of putting in place the internationalisation of our struggle which means we’ll begin to talk to the international community and highlight our plight as a people and as a nation. Our movement, the Southern Cameroons Congress of the People or SCCOP, is a movement that has got the role of championing our struggle to the rest of the world and ensure that the international community steps in and gives us the necessary support. As for our leaders who were kidnapped in Nigeria, and I need to point out in all there were 12 leaders who were kidnapped. I was supposed to be the 13th, of which by the grace of God I wasn’t captured, two of them are being released. So there are currently 10 members of our leadership who are being kidnapped and this is excluding the 49 others who were kidnapped in Nigeria as well. We are going to be launching a global campaign for their release pretty soon.

Is a complete separation of Southern Cameroons into Ambazonia a sentiment the entire Anglophone region shares?

We are independent. We do not seek independence. We were just forced by the international community into a union that, after 60 years together, we have come to conclusion that it cannot work. It is not about trying to regain our independence. What we want is complete breakaway because we are independent. On October 1 2017, our people clearly demonstrated through the whole world that we 100% want a complete breakaway from the illegal union with Cameroon. There is no documentation that defines any kind of treaty or union between the two countries. The process of forming a union between the two countries was never completed – the preliminary discussions never culminated into a treaty of union between the two countries. It is like a young man and a young woman who decide to move in and live together. The fact that they’re living together does not necessarily mean that they’re married. It has come to the point where one of the two has decided that this thing will not work = any kind of marriage between the two of us is not going to work. The only solution to this problem is that we go our separate ways.

Calls for independence for Southern Cameroons continue to grow

Can you tell us about how there ended up being this conflict between Ambazonia and French Cameroon?

In 1972, French Cameroon rescinded its federal system by putting in place what was called the United Republic of Cameroon. It is important to highlight that the reason for pushing this agenda was directly linked to the fact that oil had been discovered in Southern Cameroons and French Cameroon wanted to have complete and unfettered control over this oil, with the backing of France. It is also important to point out that this was happening at the time when Algeria had made very clear its intentions not to be subjected to France. And so with the Algerian war of independence kicking the French out, the French then saw the Gulf of Guinea as a point where they’ll have their oil revenue. They therefore worked very closely with French Cameroon to annex our country. The occupation had already taken place in 1961 was slowly accomplished in 1984 when the new president of Cameroon Mr Paul Biya decided to change the status of Cameroon from a united republic to the Republic of Cameroon. Now they’re calling it the Republic of Cameroon, it meant that Southern Cameroon no longer exists. It had been subsumed and completely annihilated. Now since then, there has been an aggressive policy of assimilation and annexation linked to the occupation of our territory by French Cameroon with the use of it military.

This came to a head in November 2016, when our people stood up, mostly our lawyers and our teachers and decided to resist French Cameroon attempts to change our system of education and complete installation of French as a system. When our people showed resistance from 2016, sent its military to go and brutalise our people, going into universities and raping young students, beating and arresting hundreds and hundreds of our young men and women, and dumping them in jail. Where we are now, we are not even interested anymore in a federal union. What we want is complete separation from the republic of Cameroon.