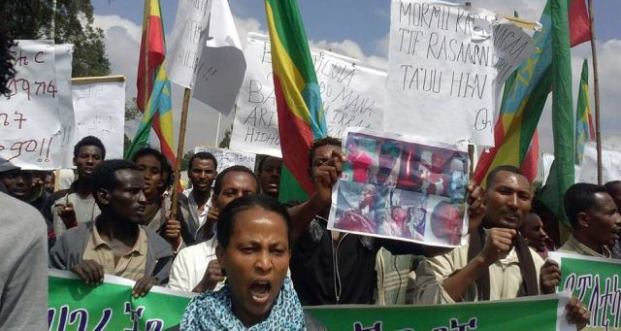 Over the past few months, students, in solidarity with farmers resisting land grabs in the Oromia region of Ethiopia, faced off with security forces in some of the biggest protests the country has ever seen. The protests against the â€œAddis Ababa Master Planâ€ were repelled by Ethiopian troops, resulting in mass arrests and deaths of protestors. ADDIS ALEM describes the current situation in the Oromia region, and how it can be compared to the #FeesMustFall protests in South African universities.

The Oromo community, Ethiopiaâ€™s largest ethnic group, began protesting in November against the “Addis Ababa Master Plan”, which, the government said, aimed to develop areas surrounding the capital. Protesters said the plan would only evict farmers and leave them dispossessed and impoverished.

While the protests were about the plan, it also was an opportunity for the Oromo people who feel marginalised economically and culturally by the government, to be heard. And the struggle over the plan is part of a bigger accusation leveled against the state: the forcible removal of removing tens of thousands of people from their homes to make way for large-scale, commercial ventures (mostly foreign).

Of course it is a problem: eighty percent of Ethiopians still live in rural areas and land remains aÂ contentious issue in this East African country.

The protests
Students â€“ from high schools and primary schools â€“ led the protests against land grabs. Doctors, nurses, teachers and bank workers stood in solidarity with them, and boycotts, sit-ins and silent marches were held throughout the country.

The response from the Ethiopian government has been brutal. The police and army in Ethiopia responded with live ammunition, teargas and mass arrests, resulting in scores dying – including children.

Independent reporting on what is happening in the country is almost nonexistent due to government censorship. There is also no way to independently verify the death toll, but activists have put the number atÂ at least 150.

Hundreds more are said to have been arrested, joining tens of thousands of political prisoners in Ethiopian jails.

Journalists, bloggers, Muslim advocates for religious freedom, non-governmental organisations, opposition groups and other dissenting voices have long been repressed with Ethiopiaâ€™s Anti-Terrorism Proclamation 652/2009. According to Amnesty International, the law permits the government to use unrestrained force against suspected terrorists, including pre-trial detention of up to four months.

Those involved in the current wave of protests have been labelled as “terrorists”, with the military being sent in to clamp down on them. Journalists, bloggers and other dissenting voices have already been prosecuted on the basis of Anti-Terrorism Laws.

Take the story of Hora Banti Irena, a 4th year Food Science student at Walaga University. On January 4th, he was arrested on campus. Two days later, his body was found in the Hadiyya river. In another incident, Reuters reported that two students were killed and six others were injured when a hand grenade was thrown at them in Dilla University.

Meanwhile, others have simply disappeared. In one case, Kenna Shiferaw, a 10th-grade student at Ambo Secondary school was kidnapped by soldiers. Her pictures, along with many others, have flooded social media.

The army was deployed onto some university campuses and schools, and some students – including high school and primary school students – boycotted class, demanding the release of their classmates and arrest of those who killed protestors.

As a result of the protests, the governmentâ€™s plan was shelved. But the protests have continued. Though calls have been made for independent investigations into the killings and arrests, nothing has been done. The protests over the land have triggered protests against the dispossession of thousands of smallholder farmers, destruction of livelihoods and erosion of cultural rights.

â€œThe government should desist from using draconian anti-terrorism measures to quell protests and instead protect its citizens’ right to freedom of expression and peaceful assembly,â€ Muthoni Wanyeki, Amnesty Internationalâ€™s Regional Director for East Africa, the Horn and the Great Lakes, was quoted as having said. Last year, in Ambo, about 125km west of the Addis Ababa, about 47 were reported to have been killed by security forces [Editorâ€™s note: the Ethiopian government said nine people were killed] after university students led a protest against the land grabbing.

In many ways, the wave of protests over land is a resumption of student-led protests 2014, and they have re-emerged at a time of immense desperation: the country faces one of the worst droughts since the 1980s. Despite the much lauded double-digit growth, some ten million people are already in desperate need of food aid as a result of the drought.

To this end, it is impossible to talk of #FeesMustFall without bringing in the struggles of students and the Oromo people in Ethiopia. They are in many ways the same struggle: for dignity, justice and better access for the black body. Moreover, #FeesMustFall is perhaps the first stop en route the land question in South Africa.

Besides, the story has certainly reached South Africa.

This places an urgent responsibility into the hands of students and other progressives organising in universities and other political formations in South Africa and beyond against this brutal repression of students fighting a similar cause.

The use of live ammunition by the security forces must cease, and thorough and transparent investigations into the extra-judicial killings and other violence against protestors in Ethiopia must begin immediately. Likewise, there must also be investigations into violence of police and private security in protests in South Africa. All political prisoners in Ethiopia must be released. The Anti-Terrorism laws must also be scrapped.

We anticipate that there will be more protests at South African universities against financial exclusion and against outsourcing in 2016. In fact, mobilisations have long begun. The promise to contain protests by any means has also been made repeatedly as universities doggedly insist they will continue to block students burdened with debt and insist on upfront payment.

A firm stand against any form of repression and urgent solidarity is needed to protect the right to protest in South Africa. In the same light, solidarity with the Oromo student-led protests against land grabbing is also an important step which speaks to the struggle of African people to decide on their own material wellbeing in their collective interests and not that of a narrow political and economic elite.

Addis Alem (not his real name) is a member of the October 6 movement, a collective of progressive students, workers and academics in the University of Johannesburg and Witwatersrand.