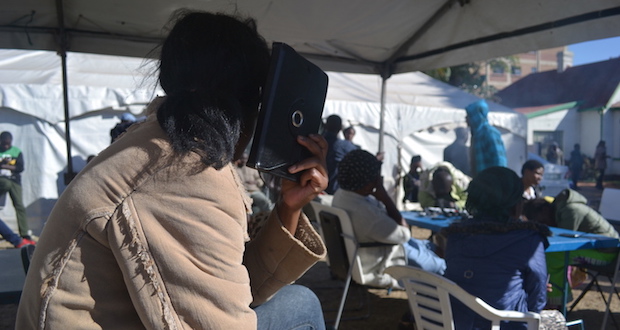 On Friday, state officials raided the Central Methodist Church in the Johannesburg CBD, a building known for offering a safe haven to immigrants, particularly after the horrific xenophobic attacks of 2008. About 500 people were detained, without recourse to legal aid. Rights groups have now successfully sued for access to those in detention. ROSE KACHINGWE* told Khadija Patel about her ordeal.

On Friday at around four in the morning, we saw the soldiers, guns and police. I was at the Central Methodist Church. Nearly everyone was sleeping. When they came – the police, soldiers, home affairs – they said everyone must wake up. They were kicking people; they were kicking in the doors – it was horrible. Everyone was shocked. Why was this happening?

We were happy when we saw the home affairs people, because in January they came to the church to take our fingerprints and to sign our asylum forms. So we thought, okay these people are coming to offer us our papers. We were happy. But then they said all of us must go to the ground floor. When we tried to talk to them, they were very rude; they didn’t want to hear any words from anyone, anybody.

And then they said that those with papers they must go to one side. Those who had their papers with them went with the officials.

Some of us had left our papers inside, but they didn’t even give us a chance to go and get them. You cannot just put your papers anywhere; you have to hide them because these permits are important documents.

We asked them if we could go back and get our papers, but they refused; they said you talk to the people at John Vorster, the central police station.

Most of us were in our pyjamas. To tell the truth even the children, they came out naked. We were harassed and no one is happy. No one is happy about the way they came. It’s like we killed somebody because they had guns and were following us. That’s when we realised they didn’t want to talk about asylum.

One of the ladies was asking whether they came to offer us papers. They said: “Hey, hey Zimbabweans! You must go back home!”

Most of us there are Zimbabwean. They are also people from the DRC, from Mozambique.

At John Vorster they were also rough. When they gave us papers, they were signing themselves – they didn’t even want to give us papers to sign for ourselves or let us read those papers. I don’t even know what they talking about. But whatever was written there is shit.

When we were signing those papers, a home affairs lady who was attending my case had a statement that asked whether you want any help or deportation, so I said help. I said to her again help, and she said “No, no!” and she ticked deportation – she just ticked deportation. There was nothing I could do; she was in control, so I could not fight with her. And when she was filling in the form, she was saying she’d caught me in Jeppe, at around 8’clock. They didn’t want to say they went to our home. That was another thing.

We were at the police station from past six when we went to John Vorster, for almost the whole day. Even when we asked for the toilet they just give us a room, a small room and they said we must do everything there. The children were with us and they didn’t give our children food in time. They offered our children food at past three. The children were really crying. My child was saying: “Mama, mama!” I said, go tell that policemen to give you food.

They don’t want us to leave the police station. But they want us to go home.

It’s an embarrassment because you know what: we are friends – we are related, South African and Zimbabwean. The way they treat us, even one of the policewomen was insulting us, saying: “Why are you here? What do you people want here We are sick and tired of you. We don’t want you here, we don’t even want to hear your stories.”

We are waiting for our asylum papers, which home affairs promised us. Even when we tried to tell them – you are the very people who came with this and now you are the people again to arrest us – they didn’t want to hear all that. So we are not prepared because we are waiting for the government to offer us what they promised us, which is asylum.

Yesterday our embassy came to see us. It’s not that we don’t want to go to Zimbabwe. We really want to go back, but the way they are taking us home is not a good way. I was planning for when I would go home so that I’d be prepared, but they just attacked. No one was prepared.

We were just waiting at the church to receive our asylum to be able to do everything else. Because without papers you cannot do anything. You cannot rent – you can’t do anything, even work. You know even the big companies they don’t want a foreigner without papers. Even now, there is a job waiting for me, but they want asylum papers. So I was there, I was happy, I was waiting for my asylum papers, so I can go back to the company. But now we don’t know.

But if they want they can even give us a second chance to finish our process or to give us a papers for a certain period to finish our planning. Because right now, no one came out of the church with their clothes or their money, or anything. We left everything there. We have to go back because our clothes, our money – everything is there.

If they hadn’t told us there is a chance of asylum, we could have done something to protect ourselves and our children. We could have planned a way forward, to maybe go home. You know, a good way. I don’t even know what to say.