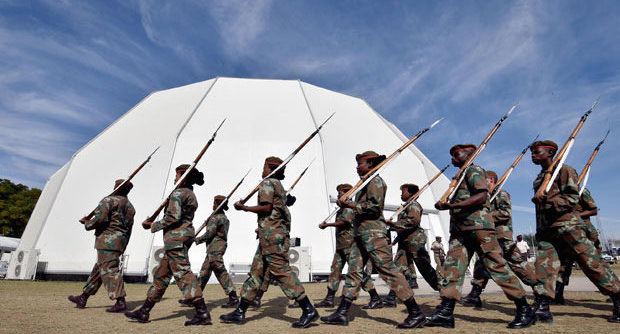 The City Press this week reported that the presidencyâ€™s national steering committee is considering the re-introduction of compulsory military service, perhaps as soon as next year. According to the report, the ANC believes military training may o help with “the social alienation of youth, gangsterism, alcohol and drug abuse â€“ and instil discipline, patriotism and volunteerism” and help train people in technical skills, such as engineering, mechanics and even medicine. ZILUNGILE MNISI asked Durbanites what they make of plans for conscription. Talent Buthelezi, 22, student, Durban
People should be given a choice about whether they want to go to the army or not; they shouldnâ€™t be forced. Conscription was compulsory during the apartheid era, if they bring it back now then it means that this country is not as democratic as it claims to be. Even if [people]Â are forced, they will not do what is required of them because itâ€™s not out of their own will. This will be a waste of time even for the SANDF. They will have to work with people who are not even passionate about serving the country. I would feel devastated if I was conscripted;Â for such things, one needs to be prepared both physically and emotionally. Nokwanda Gcaba, 21, student, Mayville
I think young people should not be forced to go to the army. It would be better if the government finds other ways to combat unemployment. If I was to be taken to the army, I would have to be ready because I see what happens to people who are in war zones. If the government does force people to go, it might help in preventing crime, alcohol and drug amongst young people but the issue lies in them being forced. I am personally fascinated about joining the army and I could do it even if I was forced. People think that going to the army only means being a soldier but they actually also train doctors, engineers and so on. Going to the army is not so bad after all – but it should be a choice. Andile Dlamini, 22, student, Newlands West
The reintroduction of conscription is not such a good idea. Government should give the opportunity of going to the army to people who really want it. The SANDF should deal will people who are determined to serve.The SANDF is not for rehabilitation; these young people are going to be sent there because the government wants to decrease the rate of crime, alcohol and drug abuse, something [the SANDF] are not trained for. Itâ€™s going to help in terms of decreasing the unemployment rate, but from what I’ve heard itâ€™s not worth it. A resident in my neighbourhood who was in exile during apartheid told me that serving this country was not worth it. All he said was that South Africa sucks and itâ€™s not worth sacrificing so much all in the name of serving a corrupt country. Juan William, 44, gardener, Durban
Young people could actually learn a lot from being sent to the army. I was in the army back in 1991 and it wasnâ€™t as bad as people think. The problem was that it was compulsory but I learnt quite a lot. Young people going to the army, whether they are willing to or not, is a great idea because they will have stability in their lives. People should just educate themselves about what really happens in the army before they even think of declining. The army is not just about soldiers and guns, there are skills taught there. Imagine a person who is a street vendor and just by being forced to the army, they return to South Africa with a qualification which earns them an income. Glen Lee, 48, shopkeeper, Isipingo
I support the idea of young people going to the army, but they should go voluntarily. Government thinks will help decrease unemployment and I think it could work. Young people Â are lazy and expect things to just fall on their laps. Itâ€™s better to be forced to go serve you country, which will also benefit you, than to sit around and do nothing. This initiative could help a lot of young people especially those who areÂ roaming the streets with no direction in life. I would personally have no problem if my own child was conscripted because they will learn a lot from the experience, especially if they is a need for them to go due to unemployment. I would support the idea of them being sent to the army.

– Voxes have been edited for brevity and clarity
– Featured image of members of the South African National Defence Force (SANDF) via GCIS on Flickr, all other images by Zilungile Mnisi