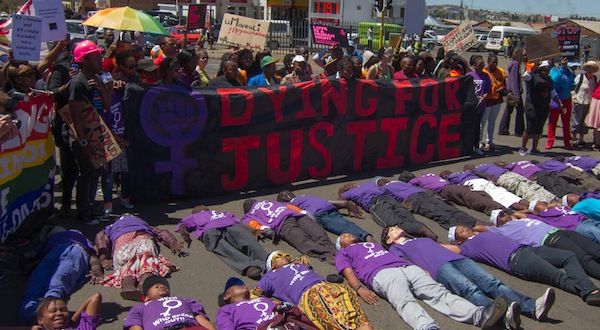 In a column for the New York Times this week, essayist TO Molefe highlighted once again issue of corrective rape in South Africa.

While not unique to this country, â€œcorrective rapeâ€ â€“ the act of raping a LGBT person with the intent of â€œcuringâ€ them and turning them straight – has become synonymous with South Africa, where it is common and well documented.

In January,Â the Independent reportedÂ that in the past 15 years, 31 women have lost their lives and gotten raped in the process simply because they identified as lesbian.

The corrective rape of lesbian women was showcased in an episode of the popular television drama Intersexions 2 last year, sparking renewed conversations on the issue.

And in a moving New York Times feature, reporter Clare Carter documented the daily struggles of lesbian women in South African townships. In several cases, the womenâ€™s families were complicit in their rapes and the police were deaf to their please for help.

â€œItâ€™s as if you are sitting like a time bomb. You donâ€™t know when itâ€™s going to explode. You are just waiting for it to be your turn,â€Â Funeka Soldaat, the founder of black lesbian activist group Free Gender, told Carter.

Gundo Mmbi, a 23-year old young who is openly lesbian recently told the Daily Vox about her fears for her own safety.

â€œThere are specific places I do not go to; I will not go partying in Soweto or in the CBD because those are the places were lesbians get raped and beaten up. Not all spaces are safe.â€

With so many of incidents reported in the media, one must ask why these cases do not appear to matter to the South African public?

Molefe speculates that the murder of black lesbians is overshadowed by the general homicides that happen in South Africa.

â€œSome public officials and commentators have argued that if the intention is to reduce murder, focusing on the relatively few crimes committed against black lesbians is misguided, since the majority of homicide victims are men,â€ Molefe wrote.

Although the South African government does not recognise the murder and brutalising of black lesbians as a hate crime, itâ€™s clear that the perpetrators’ intent is grounded in hate. We cannot let corrective rape be swept under the rug.