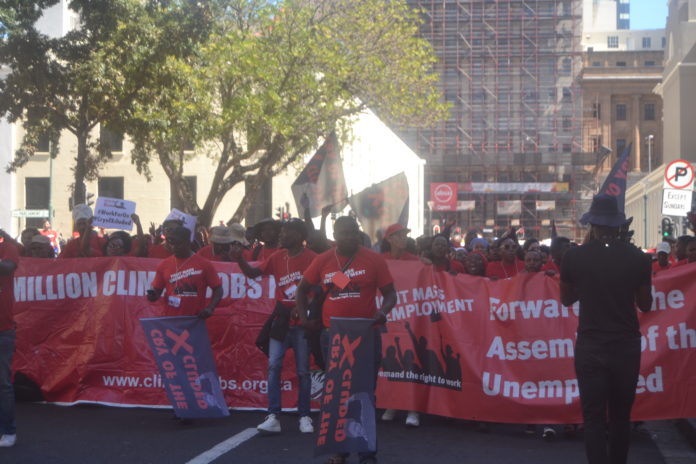 The Assembly of the Unemployed (AoU) and several trade unions have come together to protest the South African government’s economic policies. The South African Federation of trade unions (SAFTU) and Association of Mineworkers and Construction Union (Amcu) are have also joined AoU in a campaign called “The Cry of the Xcluded.”

What is it about?

The campaign seeks to raise awareness about unemployment in South Africa. A “caravan” departed from Mpumalanga, Gauteng, KwaZulu Natal and the Eastern Cape for Cape Town.

Speaking to The Daily Vox, Pinky Langa from the South African Green Revolutionary Council said they came together because the government was not listening to workers and the unemployed.

Langa said the government makes promises but nothing happens. Thus, the decision to come and “demand the government to do something about this dire situation that we are in this country of unemployment.” She said that it is mostly young people, women and black people that are affected by unemployment.

Earlier this month, Stats SA released the Quarterly Labour Force Survey (QLFS). It revealed that approximately 8.2 million (40.1%) of South Africa’s 20.4 million young people aged 15 to 34 are not in employment, education or training of any sort.

Langa says they are calling on the government to not only provide the unemployed with jobs but to also provide them with dignified jobs where they will be able to provide for their families.

What have they done so far?

On Saturday February 22, the caravan arrived in Bloemfontein and held a rally of the “xcluded”. This was done to hear the voices of people who could not travel to Cape Town. During the rally, people were allowed to air their views of the budget speech. The caravan also spoke to people on the streets around the area to collect their views. Langa said they want these views to be included in the budget speech.

The caravan arrived in Cape Town on February 2 where a #WorkForUs occupation was held at the V&A Waterfront. This week, a “Real Jobs Summit” was held. During the summit, various stakeholders from the AoU, trade unions and activists gathered to discuss solutions to the unemployment problem.

Langa said she participated in a session that looked at the need for a just energy transition, ensuring there are no job losses. She said they spoke about having the just transition in a way where it won’t affect current jobs but will actually create jobs for unemployed people.

They plan to hold a #WorkForUs budget day march parliament. This will be just a day before finance minister Tito Mboweni delivers his budget speech. The various stakeholders will combine the discussions from the two-day summit and this will be handed over to the government.

Langa said she hopes there is a change in the minister’s speech and that he includes some of their solutions and suggestions.

The speech comes just two weeks after president Cyril Ramaphosa delivered his state of the nation address. Mboweni has the task of making available the funding to carry out those policies and help fix the many issues with South Africa’s state-owned enterprises. The minister will have to explain how and what amount of funding, his department will be making available for the unemployment crisis, fighting gender-based violence and more.

The AoU is made up of Abahlali baseMjondolo, the Amadiba Crisis Committee, Amandla Botshabelo Unemployed Movement, Progressive Youth Movement, South African Green Revolutionary Council, and the Unemployed People’s Movement. In the run-up to the 2019 national election, AoU held a campaign calling on the government to tackle unemployment.

It was a basic income grant campaign which called on the government to assist the unemployed to get jobs or to create their own work.

The main reason for the current campaign is to bring attention to the campaign of the AoU against austerity, job losses, and mass unemployment. The campaign which brings together workers and unemployed people is important said Langa.

“If we are together and try to find solutions together we can be listened to,” said Langa.