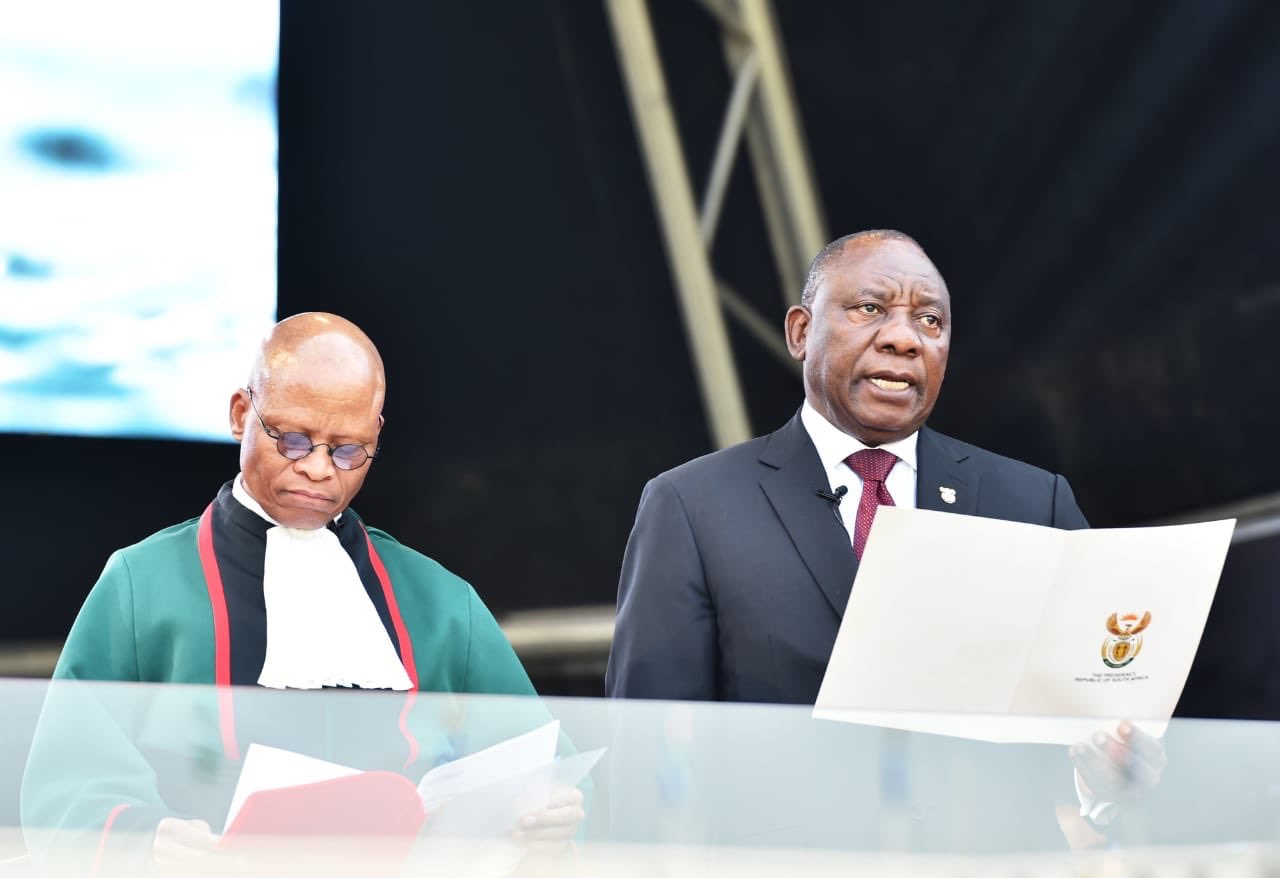 Cyril Ramaphosa was sworn in as the fifth president of the Republic of South Africa in style. On May 25, under blue skies and before various international guests and the people of South Africa, Ramaphosa swore to protect and uphold the constitution. The formidable chief justice Mogoeng Mogoeng presided over his oath of office. By SHAAZIA EBRAHIM and FATIMA MOOSA.

The theme for the inauguration was “Together celebrating democracy: renewal and growth for a better South Africa”.

For the first time, the inauguration took place at Loftus Versfeld stadium in Pretoria. This was to allow a greater number of the public to attend. In the past the ceremony took place at the Union Buildings as a triumph of democracy over apartheid. In a timely fashion, Ramaphosa addressed guests before 12pm.

Presidential speech: Ramaphosa affirms his commitment to the country and the continent

The president’s speech encouraged unity among South Africans and the African continent.

“That which unites us is far more powerful than that which divides us. We all share the same hopes and fears, anxieties and aspirations. We want our children to have lives that are better than our own. Never again shall the adversities of our past be revisited on the people of our land,” Ramaphosa said.

Ramaphosa was notably not present at the May 10 1994 inauguration of Mandela. But during the first parliamentary sitting in 1994, it was Ramaphosa who seconded Mandela’s presidential nomination.

Looking forward, Ramaphosa says he wants to build a society based on equality, solidarity, shared humanity, and good service delivery. “It is time for us to make the future that we yearn for. All South Africans want action, not just words and promises, and there shall be action in our land to reshape our country in the image of our dreams,” the president said.

Continuing with his love of quoting literature in speeches, Ramaphosa alluded to the Charles Dickens opening in A Tale of Cities. He used the allegory to describe the condition of South Africa saying there has been moments of despair and hope.

The president vowed to end poverty, inequality, and joblessness in South Africa by 2050.

Ramaphosa also addressed the huge problem of gender-based violence in South Africa. “Let us end the dominion of men over women,” he said.

Africa Day: “A brighter day is rising for South Africa and Africa”

May 25 also marked Africa Day. Ramaphosa said he was grateful to the African heads of state for spending Africa Day with the people of South Africa. The president promised to work with other African leaders to achieve African Union’s vision of Agenda 2063 goals. He promised: “To build an Africa that all Africans want, to build a Free Trade Area that stretches from Cape to Cairo.”

The South African presidency left VIPs from other Western, Asian and Middle Eastern countries off the guest list. The presidency only included VIPs from the BRICS countries.

Jacob Zuma was noticeably absent from the inauguration. His wife Ma Ngema Zuma attended the event alone. The former president’s name was on the programme.

Addressing his supporters outside the Pietermaritzburg High Court on Friday, Zuma said he won’t have time to attend. “My time to go is tricky, there is no time. I am fighting to stay out of jail,” he said. Zuma’s lawyers argued in favour of a permanent stay of prosecution in his fight against the corruption charges laid against him.

Government set aside R120 million to budget for the elaborate affair. This is R100 million less than what government spent for Zuma’s inauguration for his second term. A 21-gun salute, salute flight and battalion marches all added to the pomp and ceremony of the event.

Ramaphosa was elected as the president of South Africa unopposed during the swearing in of the sixth parliament on May 22.

“A brighter future is dawning over South Africa and Africa. I thank you as we ask that the Lord should bless Africa,” Ramaphosa said in closing.

Now that the fancy ceremony is out of the way, here’s hoping Ramaphosa and the 6th parliament will put in the work for a better South Africa for all.