Home Online Chatter The kota gets the Debonairs treatment and South Africans are having none...
WhatsApp
Facebook
Twitter
Email
Print 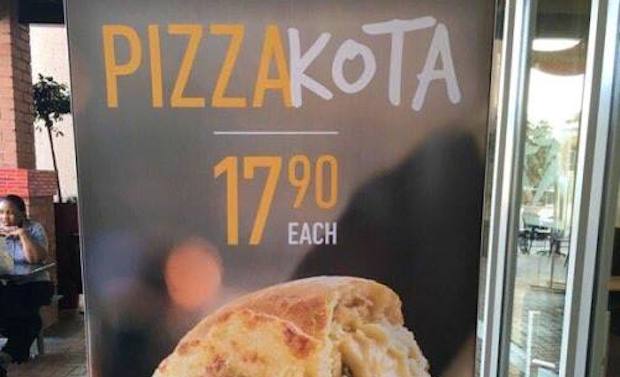 For many South Africans, Debonairs turning the kota into a pizza isÂ just one step too far. A kota, a derivation of the word quarter, is a hollowed out quarter of a piece of bread. Many have compared it to the bunny chow, because it is also a loaf of bread stuffed with a variety of cheap ingredients which may include processed meats like polony and viennas. The kota is popular in many townships and rural communities around South Africa. In an interview for the April 2014 Mango inflight magazine, Johannesburg resident Vuyo Mpantsha said, â€œThink of the kota as an evolving township street food burger.”

ManyÂ middle-class South Africans who grew up in the townships have fond memories of the kota. For them, it is almost a rite of passage, something you have to experience as you struggleÂ through life. For some, the kota is like pap and amagwinya, an integral part of what it means to be a black South African. So when a beloved and popular meal amongst the poor and working class is turned into a cheap commercial venture by a corporate South African food giant, it is understandable why people are outraged.

Gugulethu Mhlunghu called for the fast food chain to explain their latest creation.

Debonairs needs to appear before Parliament, and explain why they keep being anti the constitution pic.twitter.com/VJDjbfQ4pw

And, Debonairs ended up being the most talked-about brand on Twitter in South Africa for several hours.

Most people were disgusted, accusing the fast food chain of appropriating and disrespecting black culture.

Debonairs pizza kota!? Tf!!!! Who come up with such things?…what's in that kota? Chips+atchar+special?

Debonairs has a PizzaKota. Tatas democracy has been captured. Buya Madiba we need healing pic.twitter.com/3fB7psJkxP

Is there a Fast Food Ombudsman we can report Debonairs and Nandos to? @ThuliMadonsela3 @SAPresident @POTUS @Pontifex Please help us guys!!!

Others pointed out thatÂ the PizzaKota is the latest in a series of unimaginative food inventions from Debonairs.

Despite the criticisms, there are a few who look forward to the PizzaKota.

Just so you know I love the Debonairs pizza Kotas ???? … It's time for something new and exciting.I have grown bored of the same thing????

What do you think of this latest invention? Let us know in the comments or tweet us @thedailyvox!