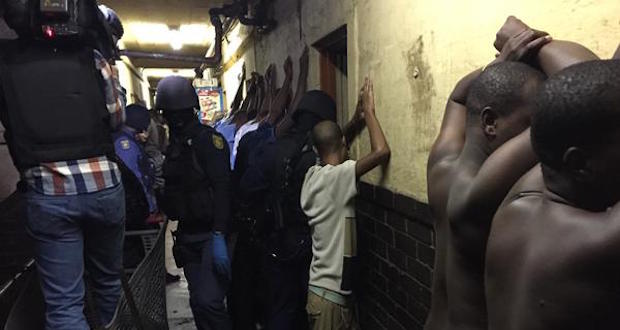 For the past two nights, the South African Police Service and the South African National Defence Force have raided hostels in Jeppestown and Alexandra township in Johannesburg. Journalists on the ground have reported on the raids, writes RAâ€™EESA PATHER, but theyâ€™ve forgotten to ask one crucial question: did the SAPS and the SANDF protect the rights of hostel dwellers?

After the raid at Madala Hostel in Alexandra on Wednesday night, EWN reported that â€œthere was calmness about the operation with less aggression and more controlâ€ than the raid in Jeppestown 24 hours earlier. While the report may lead readers to believe that the SAPS and the SANDF conducted the raids in a respectful manner, an eyewitness account on Twitter tells a different story.

Can you picture a big man like myself standing in the passage of a hostel wearing my undies,how humiliating that must be?

Former SABC journalist Jobe Sithole was staying in Alexandra with his cousin. He tweeted that he wore only his underwear when police and soldiers arrived at the residence where he stayed. When he tried to grab a T-shirt to cover his torso, a policeman pointed a gun at him.

â€œNot only am I angry I feel degraded by the actions of the SANDF.Â Hostel dwellers have no rights. Why should they have rights? They are poor and black. They live in the filth of Alexandra,â€ Sithole tweeted.

Chairperson of the Madala Hostel, Bafowethu Sokhela, told Alex News that police had found no weapons or stolen goods and that no arrests had been made. The only thing they confiscated, according to Sokhela, was three cases of beer.

The night before, Wolhuter Road Hostel in Jeppestown, in Johannesburgâ€™s CBD, was violently raided, and eleven arrests were made for possession of drugs and stolen property. A machete, an axe, and knives were also reportedly found in the hostel.

Reports on both raids indicate that hostel dwellers did not resist and pointed to the use of intimidation and force by police. Yet defense and military veterans minister Kebby Maphatsoe defended the Jeppestown raid.

â€œWhen you go on a raid and you know the situation there, you will use the minimum force. That is what they used, and remember those are policemen and those people [in the hostels] were armed,â€Â Maphatsoe said.

According to the law: â€œA police officer lawfully conducting a search may use reasonable force to overcome resistance, including breaking down doors and windows. However, the search must be conducted in a decent and orderly manner.â€

Gauteng police spokesperson Colonel Noxolo Kweza told The Daily Vox she couldÂ not comment on the Jeppestown raids. When asked about the way hostel dwellers in Alexandra had been treated by SAPS, she redirected comment to national spokesperson Lieutenant General Solomon Makgale. However, Makgale could not be reached for commentÂ at the time of publication.

With at least seven people dead and the brutal images of Mozambican Emmanual Sitholeâ€™s murder still haunting the minds of South Africans, there is little doubt that xenophobia in the country needs to be stopped. But will the endsÂ justify the means?