Home As Told to The hustle for this man is about finding safety at home in...
WhatsApp
Facebook
Twitter
Email
Print 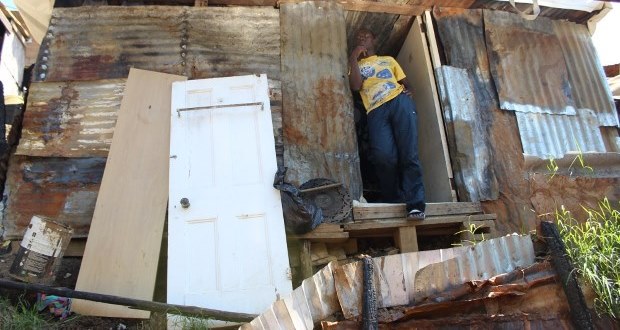 Very close to Morningside, one of Durban’s wealthiest suburbs, isÂ a Â shack community known asÂ Phanta’s hill, which when translated fromÂ IsiZulu means “Hustler’s hill”. Last month, 13 shacks were destroyed by a fire that raged through the community here. At the same time, Â there has been a series of demolitions by the eThekwini municipality. Some of the families affected have goneÂ elsewhere to seek shelter while othersÂ have rebuilt their shacks. NJABULO MSOMI’S family shack was one of the shacks thatÂ burnt in that fire. He told Qiniso Mbili his story.

I came to live in the shacks in 2011. My father has been living here for about 20 years;Â all this time he has been working as a barman at top class hotels such as Elangeni and Hilton. I live with him and my stepmother. We are originally from Oshabeni in Port Shepstone. My father came here to look for work and two decades later I did the same. I work as a security guard controller for a security company.

Life is hard in the shacks, it is hard to think about the future while you know that people from the municipality might come anytime and destroy what you call your home. Another uncertainty comes from the shack fires.

One Tuesday night at the beginning of February at 22:35pm, a fire broke out. I only woke up when the house was full of smoke and the outside of the house had already caught fire. I was with my stepmother and we took out what we could. That night we did not sleep because we had to guard our things which were now scattered out in the open; the shack was burnt to the ground. It was only the following morning when we were assessing the damage that I realised how much we had lost in the fire. I lost a whole lot of documents from work, including my security certificate, a TV, clothing and blankets. We never received any help from anyone and a day later we had rebuilt the shack using some of the burnt material.

The first shack that was burnt down was much bigger and we had people renting some of the rooms. Ever since we live in this newly built shack, life is hard. It is much smaller and we do not have people paying rent to us, which means less income for us. Also, this means much less privacy because it’s just two tiny rooms and three adults live in it. When it rains the water literally washes past the floor and everything that is on the floor is damaged. One night it rained so hard I could feel the shack slightly sliding down. These shack demolitions have only made things worse because we never know when they are coming. Even when I go to work in the morning, I have that discomfortÂ of not knowing whether my home will still be in one piece when I get back.

This community is a symbol of South Africa’s unfairness because when I walk just up the hill I enter one of the most luxurious suburbs yet I live so poorly down here. Living in a brick house is only just a dream to me, I would give anything to live in an RDP house.