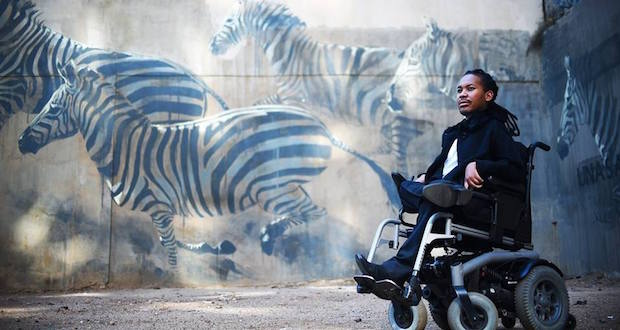 Eddie Ndopu, Africa’s own rockstar activist is off to Oxford University on 14 September to do his Masters in Public Policy. He spoke to The Daily Vox about his excitement for London and his mission to tackle the access gap for people with disabilities – a mission that will culminate in Ndopu travelling into space.

I think the journey is going to be exciting – I love London. I love the culture, I love the fashion of London. I’ve been before so I’m looking forward to exploring more of the creative industries and just immersing myself in its popular culture. So that’s exciting.

I’ve started my own organisation with a friend who will be based here in Joburg and I’ll be based in Oxford. We’re building this incredible and exciting organisation together which actually plans to send me off into space as the first African with a disability. So we’re currently raising funds for that.

The organisation is called the Evolve Initiative and what it seeks to do is reimagine public policy beyond compliance and really try to kickstart a global culture that affirms the humanity of people with disabilities. So we’re kind of in the business of closing the access gap for people with disabilities – and we do that through the public policy side and the popular culture side.

So the bit about space is really, upon graduating from Oxford, I’ll embark on this three-year journey travelling the world. This will all be captured in the form of what we’d call a feature length presentation – so part documentary film, part blockbuster, part social justice manifesto. A very, Beyonce’s Lemonade-esque, visual album that hopefully inspires.

So basically it’ll be two years of me travelling the world, collecting the stories of people with disabilities and their experiences of the access gap. And it will culminate in me going off into space and hopefully addressing the United Nations (UN) from space about the access gap. So these two years will about finding these stories and piecing them together to form the talk of my life – the speech of my life basically which will be up in space. So that’s the culture side.

On the public policy side, it really is about going beyond compliance. Like what would it look like to talk about access beyond the built environment? Access to joy, intimacy, self-determination. For example, I can get into a bank because there’s a ramp, but once in the bank I’m still required to sign in order to get my money, because a signature is kind of the gold standard for authorisation. But as a person with a disability, there are other ways of being able to do that – so introducing and expanding policy beyond just ticking a box to say, “Hey, were compliant!”

So this is what the organisation seeks to do, and we’ve got the back of some powerful organisations already. We’ve got the World Economic Forum, we are in talks with the UN and we’ve just sort of established our global advisory council. So we’re moving quite quickly and we’re going to raise about $15 million between now and the end of 2019 for this exciting initiative. So I’m going to be a fulltime student and a fulltime entrepreneur – I’m doing it together while at Oxford. It’s going to be quite the big year.

The Evolve Initiative is registered in South Africa but we’re looking at opening up offices in London, New York and Singapore as well. We’re a global firm, but our footprint and headquarters will be in South Africa.

To black individuals with a disability, all Iâ€™d have to say to them is: trust your struggle. But I my words of advice I think, if anything, would be directed to the society around them. Young black people with disabilities already have to negotiate so much. They have to negotiate ableism that is institutionalised, they have negotiate neglect, isolation and trauma. And so the very act of waking up in the morning is quite radical and powerful. Their existence is very much a form of resistance.

So my message would be not so much to them – because I think they are embodying the lived experience – it would be more towards the broader society of non-disabled people.

This message would probably be that we need to create conditions for people to live lives that are more “livable”. That means we need to challenge ableism as a system of oppression and domination. And that means able-bodied people need to be quite self-reflective about the ways in which they are complicit in the exclusion of people with disabilities. I frankly think there needs to be more work being done by able-bodied people so that people with disabilities can thrive and live their best possible lives.