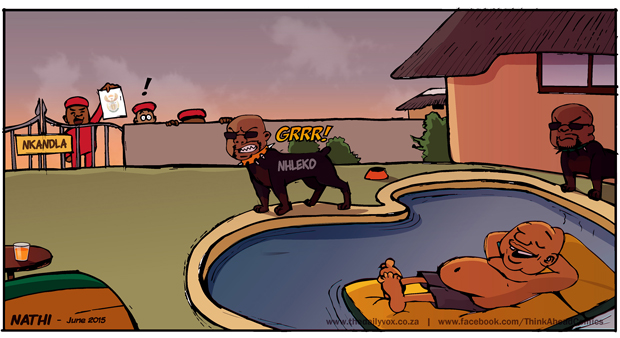 Nhlekoâ€™s report predictably found â€“ contrary to public protector Thuli Madonselaâ€™s report last year â€“ that President Jacob Zuma did not have to pay back any money for upgrades to his private residence.

However, the Economic Freedom Fighters (EFF)Â has announced that it intends to take Zuma, Nhleko, public works ministerÂ Thulas Nxesi, and the entire cabinet to court over the constitutionality of overriding Madonselaâ€™s report.

The EFF has been in parliament for just over a year now, and has repeatedly shown that it has the ability to take on powerful figures without fear (weâ€™re not so sure about favour).

So, while it looks like Zuma has his Nkandla security arrangements â€“ complete with attack dogs â€“ all sewn up, heâ€™d better beware of the EFF banging on the gate. We reckon thereâ€™s only one way to make them let go of this one: just #paybackthemoney.