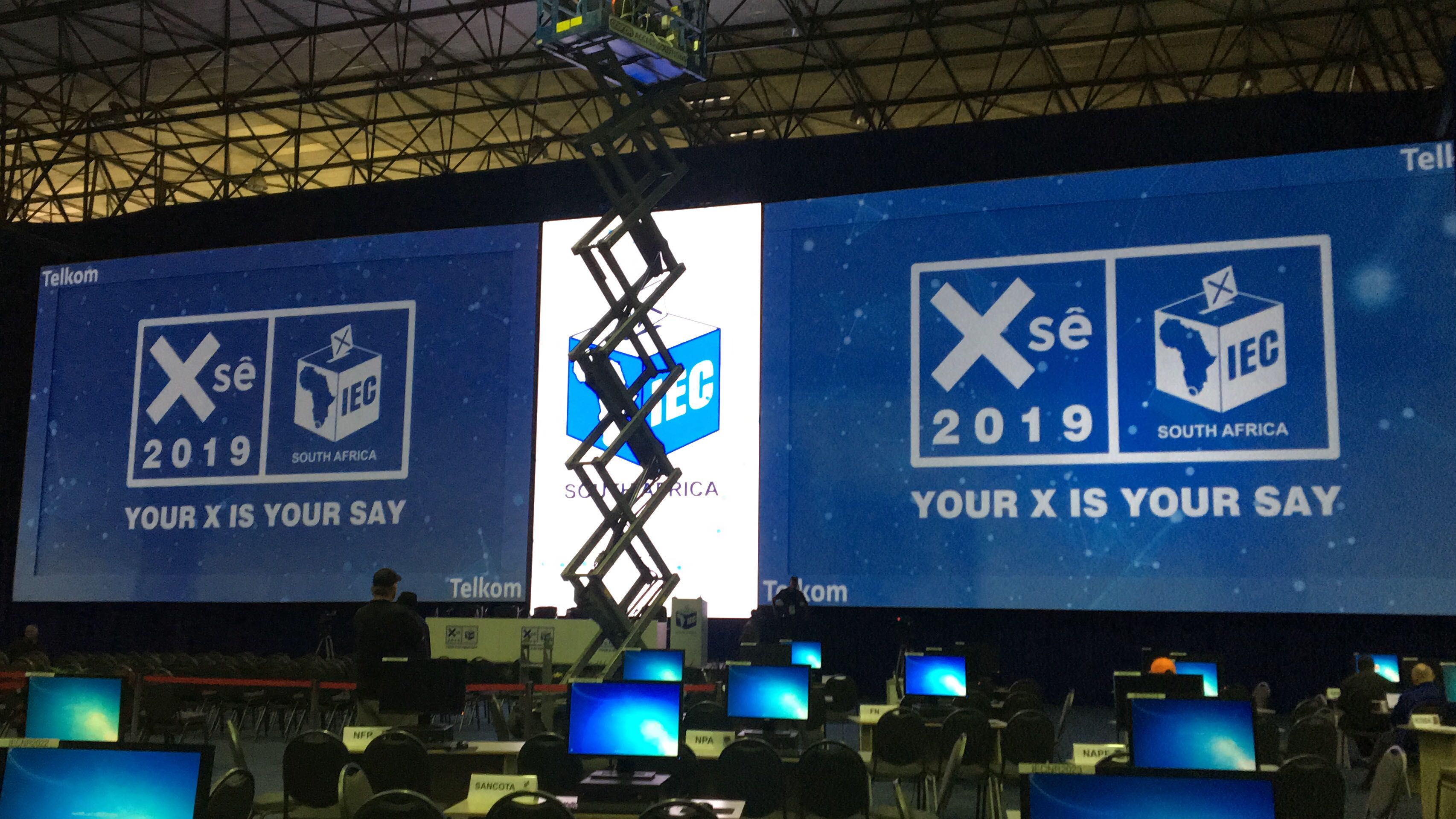 Welcome to the second day of The Daily Vox’s elections live blog. We’re bringing you live updates as votes are counted. We’ll mostly be based at the Results Operation Centre in Pretoria.

18:40 The African Transformation Movement, the Congress of the People and other small parties are challenging the results of the elections. (At this point, just over half the votes have been counted, and it’s not looking good for any party aside from the top four…) The complaints hinge on as yet unconfirmed reports of voter fraud.

15:40 We are nearing the halfway mark in the counting process. At 48% of the captured votes, the ANC has 56.6%, the DA has 23.41% and the EFF has 9.35% of the South African vote.
15:32 The ANC deputy secretary-general Jessie Duarte says the party are exactly where they are supposed to be in terms of their own predictions.

15:23 Freedom Front Plus Gauteng leader Jaco Mulder says during the party’s election campaign, they expected that FF+ might capture a significant portion of the vote. “It’s nice to see that it’s happening. The question remains: how far will we go? But time will tell.”

The party has had a successful electioneering campaign because of its visibility at a grassroots level, on radio and an effective social media campaign.

Originally, Mulder says, the FF+ had a majority Afrikaner voters base but now more and more minorities have seen the party as an option.

14:43 At 14:00 the IEC held the press briefing which was postponed from 11:00. At the briefing the IEC said they will “urgently conduct an audit of results and votes cast in a sample of voting stations to ascertain if double voting occurred”. This audit will cover both sample voting stations and stations where they have received complaints of double voting. This process was accepted by political parties in the meeting held earlier today.

The IEC arrested four voters in KwaZulu Natal in connection with double voting.

As the results are captured and the verification processes continue the IEC assures South Africa that it will only announce election results once it is completely certain of the integrity and legitimacy of those results. According to electoral rules, the IEC has seven days to announce the elections.

Commissioner Janet Love said any concerns and objections against the elections need to be as specific as possible.

14:35 Godrich Gardee, the EFF secretary-general, says the party has confidence in the IEC with all processes related to the elections. “We have raised concerns with the NPLC, an advisory body of the IEC, where we sit. We think we should not undermine that process. Let it unfold to its logical conclusion,” Gardee said. He was responding to The Daily Vox regarding the allegations of voter fraud.

14:25 The IEC is looking into allegations of voter fraud, at the request of the DA and EFF. The process to investigate this may delay the announcement of the final result, due Saturday, according to the Business Day.

14:05 We’re live at the results centre in Pretoria, where the IEC is currently updating the media on the progress of the vote counting.

14:00 The DA’s Solly Malatsi says the party is happy with their results so far. “As the results are trickling in it shows that our work has paid rewards in many aspects. We are on track to retain the Western Cape with an outright majority,” he said, adding that they are confident of bringing the ANC below 50% in Gauteng.

12:38 ATM national chairperson Mandisa Mashiya said even though the party is doing well. They aren’t happy about the results and they feel the IEC have failed the people of South Africa.

11:45 Cope was one of the parties in the meeting with the IEC following allegations of voter fraud. Cope Provincial Secretary in the Free State Mzwandile Hleko said the main issue was the possibility of people who have voted more than twice in different areas. “The IEC has come up with a proposal to say they will investigate quickly in the areas identified. Copes position is going to depend on the response from the IEC and the case laid by Cope chief whip Deidre Carter,” he said.

11:40 Acting spokesperson from the SRWP Vuyolwethu Toli told The Daily Vox that they have greater mission beyond elections which is of bringing a socialist revolution to South Africa. However he said they are pleased with the results so far. “We are not a party that is preoccupied the participation of parliament. Parliament for us is a tactic. We want to prepare the working class of South Africa for a socialist revolution.”

11:26 The Women Forward party hasn’t contested elections since 2009. However, they are making strides and have racked up close to 2000 votes so far. Regional Elections Coordinator Busa Ledwaba says the party is pleased with its progress. “I think we’re doing well. They’ve still not captured the votes in the areas we were campaigning in, I think we’ll get more seats.”

11:22 Gwede Mantashe, the ANC national chairperson, visited the results centre. He told journalists the ANC trusts the processes of the IEC.

10:51 The IEC has postponed its press briefing, due to take place at 11:00, to 14:00. IEC officials are still in a meeting with COPE and other political parties following of allegations of voter fraud.

10:39 Sam Shabane, the Good party’s Gauteng provincial coordinator, says the party is pleased with the votes it is stacking up. For a new party, forged only six months ago with limited resources, Shabane says the votes show Good’s message resonates with South Africans.

10:36 The Land Party’s Nathi Prince says her party is happy with the way the elections have gone. The party which formed in Hermanus Western Cape hope to make the most gains in that province.

10:00 Editor’s note: It’s far too soon to be making any sort of predictions about the final results. At this point, the overall result is skewed by the inflow of ballots, so in other words, if an ANC-heavy district comes in first, it may look like the ANC is winning… and so on.

10:00 Almost 3.3 million votes have been cast for the national election. As it stands, about 27% of the votes have been counted. The ANC is in the lead with about 55% of support, followed by the DA with 26% and the EFF with 8%. Interestingly, VF Plus has the fourth largest share of the vote and is sitting on 3%. Keep up to date with the live election results on the IEC dashboard.

09:25 Curious about how smaller parties are shrinking except the VF Plus which has a growing voter’s base? The Mail & Guardian has a story.

08:25 Lizeka Maduna interviewed young voters yesterday. You know what they said? “I’m voting because I believe…”

06:00 From this point onward, it’s all results. Expect a topsy-turvy ride until the final results are announced on Saturday.