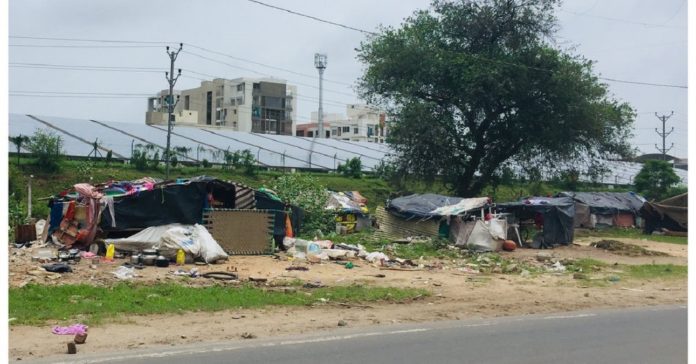 A new household survey has The National Income Dynamics Study (NIDS) Coronavirus Rapid Mobile Survey (CRAM) recently revealed the extent of unemployment and hunger in South Africa as a result of the Covid-19 pandemic. The survey found that least 3 million South Africans lost their jobs during lockdown between February and April, two million of which disadvantaged black women.

An additional 1.5 million reported having jobs. Almost half of the households surveyed (47%) reported that they ran out of money to buy food in April. One in five respondents (22%) said that someone in the household went hungry in the last week and one in seven respondents said that a child went hungry in the last week. The survey showed that women have borne the brunt of Covid-19 job losses.

Nomvuyisa Agosi is a 46 year old widow with 5 children. The family currently lives in Site C in Khayelitsha in a RDP home she inherited after her husband’s death ten years ago.

I was working at the beginning of lockdown as a domestic worker. We were then told a week later to say I have to stay  home because it is not safe. Now at the beginning of September I was called in to the home I was working at for a meeting. They told me I don’t have a job anymore. They have a nanny too who was sleeping in. They decided to keep her on as a domestic too, and let me go. They said it is better for them to have someone that sleeps in. Not me who has to travel home every day. That’s how I lost my job in Constantia. After six years no job. I did not have a contract or anything. I got a package payment but it is not enough. There were no UIF payments for me all these years too. I have small savings but cannot get it till next year because I fixed it for a year. I was getting a salary but they deducted the transport money.

I have five kids. They all depend on me. They are all in school too. They depend on me having a salary. We need food. I am only dependent on a government grant. So it is very difficult. I am lucky I live in this RDP house, and I don’t have to worry about rent too. With the food parcels, not everyone is getting it. If you were working and you lost your job you would not be getting that. They only gave to people who were not working at all. The problem is even with the job I had it was not enough.

We don’t know how to get any food parcels. In the locations it is difficult. I don’t have a yard for the kids to even play or stay in one place. When I get my grant money I buy sanitiser, when it is up I have to wait till the next grant payment. I use soap and jik in between.

I don’t have any family to help me, but sometimes my neighbour who only has one child gives me food. Everyone around me is struggling. There are many days with no food. I have to beg my neighbour. It is like that all of the time.

With lockdown it is very bad. It is as if no one needs me. I can do more than cleaning. I just need help.I need a job.

Buyiswa Jada is a 37-year-old single mother of one living in Site C Khayelitsha.

I have been doing domestic work for eight years. I was working in Constantia these last few years. I didn’t get a payslip or anything. They told me in January this year they don’t have a job for me anymore. My mom was told in 2008 she has brain cancer. Last year exactly a year ago my Dad fell ill with cancer, and last December needed a few operations. My mom has since passed away. I think they did not want to deal with someone like me that had to look after sick people. I needed days off. They did not give me understanding while I was going through this.

My ex bosses did not even give me a chance. They told me they were deciding last year already about how they don’t want me working for them anymore. This all started when I needed to look after my Dad when he got sick. I asked for a chance while my mom was still alive and I was looking after her.

I got a three months salary when I stopped working there as a package. The money is long gone

I tried to get home-based care for my mom. But I was told she was too young to get it. We could not afford the private one. So I had to be home to look after her.

I told my ex bosses about this. I am the only one here who could help my parents. There is no one helping us.

I live with my sister, younger brother, my Dad who is still sick, and my son. I only get a grant. My sister works for a big supermarket. She buys sanitiser when she can. But we all rely on her money and my child grant. It is not enough. It is really tough for me. We are struggling with food all the time. My sister’s salary is what keeps us going for part of the month. End of the month comes and the money goes so quick. We ask people around us for help all the time. We make a plan, but it is very difficult.

Very bad. There is no work. I can’t even walk around and knock on doors to ask for work. I don’t know what to do.

Jamie Arendorf is a 22 year old single mother of one from Steenberg.

I was working for the Department of Social Development on contract from March 2019.  I started out doing administration work on a contract. Then got a contract again to do field work with homeless people. I was facilitating workshops, and helping people to get into shelters. Since lockdown started I have been without work. It has been really hectic. I am still unemployed. I could not apply for UIF as I was supposed to get a new contract. Now I don’t even know if I am able to apply. I am still waiting for them to let me know if they are going to give me work again.

I live in a house in Steenberg with my family. There are six people in the house. My stepfather is the only one earning an income. He supports all of us. It is so difficult because I am not contributing anymore. I don’t get a social grant either. SASSA keeps giving me appointments that never happen. They keep postponing. It is difficult when you don’t have travel money also. So I have missed most of my appointments , because I don’t have the money to get there too. I have friends who help me with things, but they can’t help me all the time. We don’t have sanitiser regularly. It’s a luxury item for us.

I have been trying to send my CV out regularly. But the problem is transport money even if I get the interview. I really just need a job at this point.

The Daily Vox has partnered with Australian social enterprise ThankYou who have come up with a plan to end extreme poverty. Read more here.