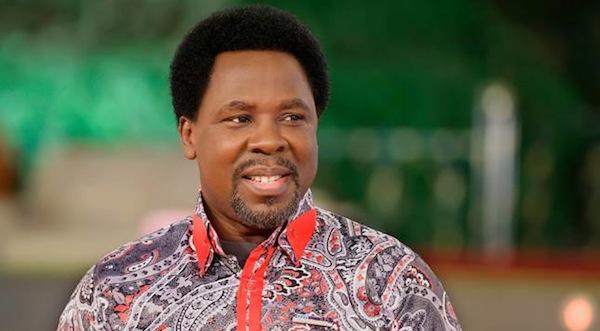 You would be forgiven if you said that Synagogue Church Of All Nations (SCOAN) leader TB Joshua is the Kanye West of Christianity. We’ve heard by now how the larger-than-life pastor predicted the disappearance of Malaysia Airlines MH370, was once best friends with Julius Malema, and as a “prophet of God” has healing hands that can cure anything “from disabilities to cancer and HIV/Aids.” But what else do we need to know about him? AAISHA DADI PATEL rounds up.

With more than a million Facebook fans and hundreds of thousands of views on his Youtube videos, Joshua is certainly a celebrity in his own right.

“Nigeria’s most controversial clergyman,” with an estimated net worth of $10-million and $15-million, is ranked as one of the five richest pastors in Nigeria by Forbes magazine and one of the 50 most influential people on the continent according to The Africa Report. Not too shabby for a man born in Arigidi – a dusty village halfway between Lagos and Abuja – back in 1963.

According to SCOAN, his mother carried him in her womb for 15 months. On the church’s official website, Joshua says he overcame tremendous challenges to get to where he is now.

From dropping out of secondary school in his first year to working in a poultry farm; from teaching little children while attending evening classes to washing peopleâ€™s legs on the muddy streets of Lagos; from a forty day fast to receiving a divine call and starting a ministry with a mere eight members â€“ the life of TB Joshua is a story of amazing grace and unwavering focus.Â

Today, he is a mentor to presidents yet a friend to the widows and less privileged, a role model to his generation yet a humble and hardworking man, toiling tirelessly for the advancement of Godâ€™s kingdom. His story is an encouragement that there is hope for the weak.

His list of famous friends is immense. Joshua has apparently treated everyone from Winnie Madikizela-Mandela to Morgan Tsvangirai as well as SA rugby players Jaco van der Westhuyzen, Ruben Kruger and Wium Basson.

He claims to have restored hearing to the deaf and mobility to the physically disabled, and the SCOAN website shows before and after pictures of people whose wounds had been healed – dog bites, burns, ulcers, and a “cancer-eaten arm”, made all better.

His famous ‘Anointing Water’ – water over which he prays – once caused a stampede and almost brought Ghana to a standstill in 2013. Although, he concedes that it is faith and prayer that brings about healing, and not the water itself, this doesn’t stop him from selling it.

Joshua even has his own football club, My People FC, which he says is there to help the youth.

His most famous asset however is Emmanuel TV, which runs 24/7 and broadcasts live events, such as ‘healing services’ and ‘international crusades’.

For the moment however, Joshua’s name is in the media because of the collapse of a guesthouse at the SCOAN complex. The full extent of the casualties has not been confirmed as Joshua and the church have not been cooperating with officials but at least 67 South Africans alone are reported to have died. Joshua claims that the disaster was caused by a low-flying plane and Boko Haram militants.

It is the fourth time that a SCOAN church structure has been destroyed.