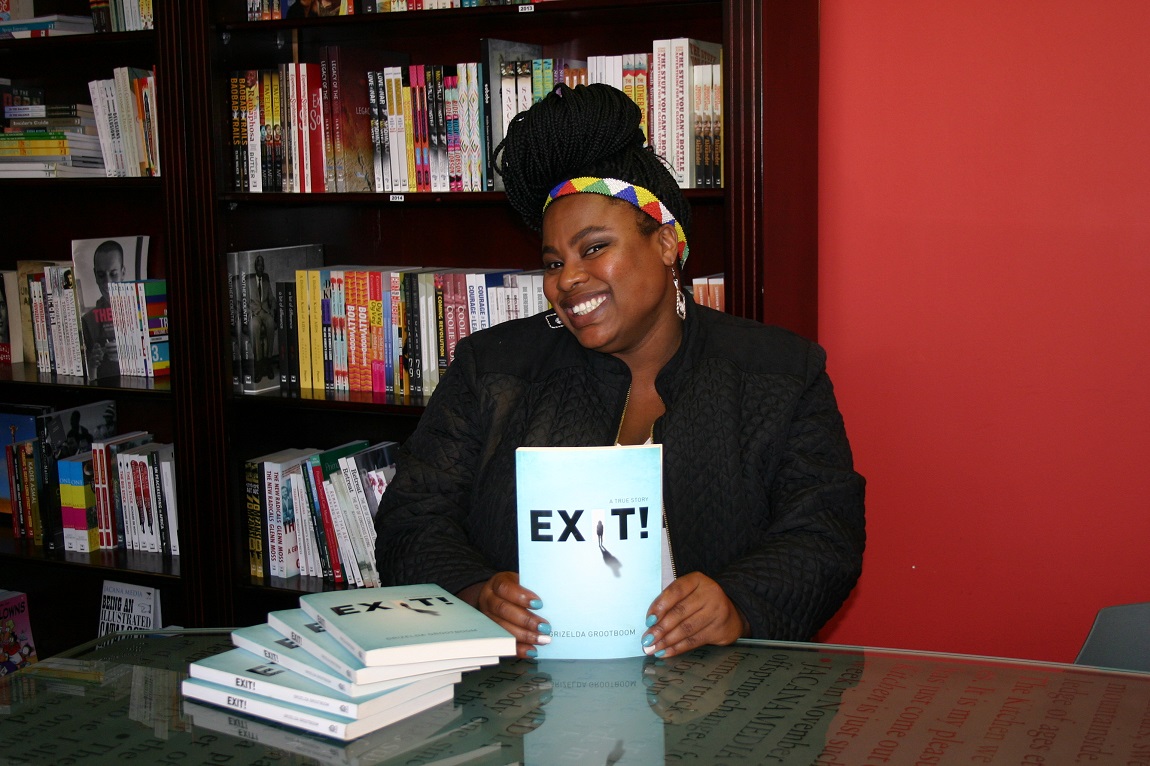 “My life has seen cycles of abandonment and abuse, sexual exploitation and domestic violence. But my story begins before I was born, because my mother was caught up in a similar cycle when she was a girl,” writes Grizelda Grootboom in her memoir, Exit.

In a society where child and women abuse is rife and thrives through patriarchy, Grizelda’s story captures a tale which too often goes untold: stories of child abuse, torture, sexual exploitation and power of men. In her memoir (released in 2016), she narrates the sad reality of a black adolescent girl who is robbed of her teenagehood due to a vicious cycle of abuse.

In her introduction, Grootboom recounts how her entire story unfolded, from being abandoned by her mother to being gang-raped at the age of nine, a life event which was the beginning of her life disconnection; and later being introduced into prostitution at the age of 18.

In the first chapter, she recalls being a happy child, at one stage when she was was with her paternal family, until her great-grandparents passed on and her father whom she grew up with abandoned her at the age of eight. This, as a reader, I found to be a reality of how child neglect and lack of parental protection can result in abuse of children.

After being raped at the age of nine, this wasn’t her very first and last ordeal. The monster that is rape creeped up again, as it is often said that victims of rape are most likely to go through the same experience again. As if being raised by an abusive mother who would call her names and beat her up everyday was not enough, she continued to endure torture, physical and emotional abuse, again, just when she had thought her life was about to turn around for the better.

The way the story unfolds, one can’t help but imagine the grief and sorrow of the author, of being a young black girl without protection. All the torment she went through sounds like fiction until reality sets in that one has witnessed such cases. We’ve come across young girls and women whose stories of abuse are similar to the author’s; we know them by names yet somehow society still refuses to recognise them and their pain.

There’s a chapter where Grootboom talks about being getting a chance at a new and liberated life. This is when she is promised a job by a friend that she meets while living on the street. Little did she know it was the beginning of the worst. When she left Woodstock, Cape Town for Johannesburg, she envisioned her life becoming normal again. Until she found herself in a room full of strange men who physically and sexually assaulted her for days, without any mercy. Similar to many other rape survivors, she was forced to relive her experience of gang rape.

The cycle of drugs, assault and rape became her daily routine. Her own will didn’t count because she had been sold out by someone she trusted. “I became a prostitute from the age of 18, because I needed money for drugs,” writes Grootboom. Drugs were her only escape from the sadness that was her life, the pain of all the abuse and suffering.

After falling into the trap of drugs and prostitution, the author details how the world works, with extreme violence from powerful pimps. She recounts her own abuse experience from her pimp. “I was sold, a sex slave, to the gangsters. I was locked up in a building and I was raped and physically abused for three days,” writes Grootboom.

Exit narrates a story of many South African children and women, who suffer abuse at the hands of their loved ones, strangers and the system. After being raped by gangsters for owing money to her pimp, Grizelda went to the clinic seeking help but all she could get was shame and judgement, being blamed for her own ordeal.

“Traumatised, I went to the clinic and told the nurse, I was just raped by a lot of men. I just want some help if she could clean out my wounds,” she writes. But all she got was a cold response from the healthcare worker. She had not reported her case to the police, fearing an indifferent response – something she now faced from healthcare workers too.

When the author was gang-raped at the age of nine with her friends, they all decided not to tell anyone as this would bring shame to their families, and would invite stigma to them. They decided to take their traumatic experience to grave with them because: “we knew that our community and parents wouldn’t care. The community knew what this was happening regularly. No big deal.”

Their rapists were boys and they were being protected by the community. Families protected their boys and the blame was cast on the girls for misbehaving, the same scourge that continues to thrive in the society as victims of abuse continue to bear the brunt of prevalent ridicule and blame.