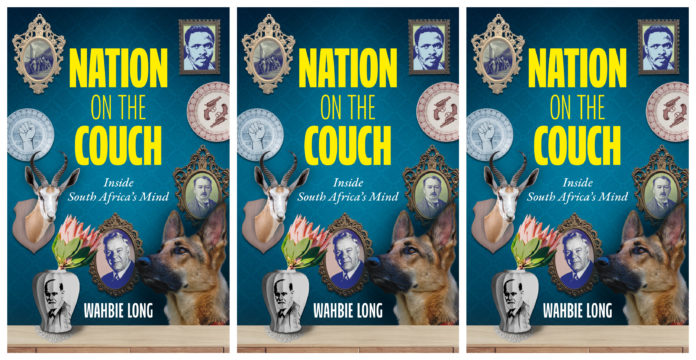 Professor Wahbie Long’s Nation on the Couch explores life in our beloved country through the lens of psychoanalysis. By focusing on the idea of a ‘political unconscious’, it argues that there is much to be learnt from excavating the inner life of South Africans, which can illuminate the external problems that beset us from all sides. It will challenge readers to rethink the way we see ourselves, why we do what we do and why we are who we are.

An extract provided by NB Publishers in published below.

Beneath it all, one senses the rumblings of the one thing South Africans never tire of discussing: the problem of corruption. The numbers are truly eye-watering. The cost of what we now call ‘state capture’, for example, amounted to R1.5 trillion over the course of former president Jacob Zuma’s second term. To put that figure into perspective, “state capture has wiped out a third of South Africa’s R4.9-trillion gross domestic product, or effectively annihilated four months of all labour and productivity of all South Africans, from hawkers selling sweets outside schools to boardroom jockeys”.180 It is a national phenomenon ready for psychoanalytic exploration. Just as activists acknowledge the relationship between inequality and violence without ever identifying the connecting tissues of shame, resentment and envy, mainstream analyses of corruption are similarly lacking in psychological understanding. Corrupt officials and business people are written off brusquely as criminals without any thought given to their possible internal motivations.

How, then, does one make sense of corruption, especially when so many of its functionaries spout leftist ideology as though it were the only game in town? The word that comes readily to mind is greed, which happens to be — like envy — one of the seven deadly sins. That small matter, of course, did not prevent Gordon Gekko of Wall Street fame from proclaiming its virtue: “Greed is right, greed works. Greed clarifies, cuts through, and captures the essence of the evolutionary spirit. Greed, in all of its forms; greed for life, for money, for love, knowledge has marked the upward surge of mankind.” The thing is, greed for Gordon Gekko is a different proposition to greed for someone like Smuts Ngonyama, former national spokesperson of the ruling African National Congress, who wrote himself into the history books with the now immortal words, “I did not join the struggle to be poor.” That was his response when questioned about a black economic empowerment deal that concerned a R6.6 billion stake in Telkom — from which he stood to earn a cool R160 million.

Ngonyama, however, was hardly the only political merchant around: his infamy was merely the result of saying out loud what his fellow comrades could only dare to think. Deborah Posel, for one, notes how other ANC activists had no trouble reconciling their erstwhile Marxist sympathies with “sometimes spectacular enrichment”.181 But, for her, the issue is not whether African consumption under democracy involves a betrayal of the liberation movement: instead, she argues that just as apartheid-era “blackness was produced as in part a restricted regime of consumption, the politics of enrichment could readily adopt the discourse and symbolism of emancipation”.182

I, too, want to defer the question of ethics, at the same time approaching the matter from a different angle, namely, the psychodynamics of lack and desire. After all, there is something to be said about corruption — or unregulated consumption — in a social landscape scarred by centuries of deprivation. Greed is inevitable in this context; as it happens, it turns out to be the cousin of envy too. Both states suggest preoccupation with a prized commodity: the man of envy is powerless over its supply; the man of greed devours it as he wishes, when he wishes. The desire of one is frustrated by lack; the desire of the other cannot be sated even by plenty.  One looks on forlornly from the sidelines; the other is on the field of play, feasting, snout revelling in the trough.

For many an impoverished person whose economic fortunes are suddenly reversed, the standard course of action is like that of the parched traveller who, stumbling upon a supply of water, immediately starts chugging the precious fluid. The body, however, cannot absorb it quickly enough, setting off another round of wasted hydration. Body and brain cells begin to swell, triggering hyponatremia and leading to confusion, seizures, coma and eventual death. The deep-sea diver who, in her anxiety to leave behind the darkness of the ocean floor and reach the surface, climbs too quickly and develops decompression sickness — also a potentially lethal condition — makes a similar error.

And then there is the previously mentioned South Korean movie, Parasite — yet another illustration of this paradoxical principle (spoiler alert). A family mired in poverty forges documents that allow their son to tutor the daughter of the Park family. The son lies to his wealthy employer, enabling his sister to work as a (fake) art therapist to the Park’s other child. After a series of deceptions, the entire Kim family ends up in the employ of the Parks in various positions: chauffeur, housekeeper, art teacher and tutor. Eventually, the Kims’ collective greed precipitates a takeover of the entire household, until Mr Park’s calamitous shaming of Mr Kim. Reminded in that moment of his abject servitude, Mr Kim’s envious resentment kicks in and he knifes Mr Park to death.

Like love and hate, envy and greed are two sides of the same coin. That envy should become greed is perfectly plausible with the shoe on the other foot and deprivation turning into abundance. In both cases, a compromised self-formation makes it extremely difficult to slow down what are compelling — and ultimately destructive — psychic processes. In a public lecture, Habib spoke of how the Zuma administration seemed not to have understood that there is only so much one can steal before the golden goose expires. But this is not a question of whether one has the smarts to steal ‘right’: depending on the extent of the damage done to the collective self, envy and greed can become uncontrollable forces with an unstoppable logic, culminating in the annihilation of all hope.