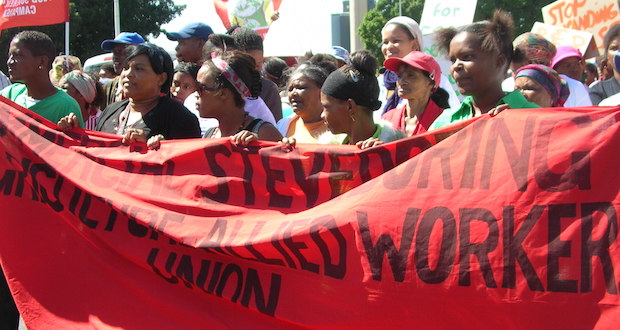 The Commercial Stevedoring Agricultural & Allied Workers Union (CSAAWU) was threatened with closure after it incurred a R600,000 cost order for supporting an unprotected farmworkersâ€™ strike last year. Unable to raise the funds from its poverty-stricken constituents, it turned to crowdfunding to source the money.

CSAAWUâ€™s woes started in 2012, when thousands of De Doorns farmworkers went on an unprotected strike that lasted four months. The strike was successful â€“ protestors managed to secure an increased minimum wage for farm workers, from R69 to R105 a day. But close to 100 CSAAWU members were faced with dismissal.

The union went to court to fight their dismissal but the Labour Court ruled that CSAAWUâ€™s choice to support the farmworkersâ€™ strike was recklessness and irresponsible, and saddled the union with a R600,000 cost order.

On December 4 last year, the union started the first phase of an Indiegogo campaign to raise the funds it needed to pay off the cost order. Within a matter of weeks, it had managed to raise the $10,000 (about R114,000) it had asked for.

Speaking to The Daily Vox, CSAAWU general secretary Trevor Christians said that the fundraising has increased the confidence of farmworkers and had made them a visible group within society.

â€œCSAAWU is a union for the most marginalised labour workers in South Africa. The support we have received shows that people do care,â€ Christians said.

â€œThe apartheid conditions in which farmworkers worked still exists today. This cannot continue. As CSAAWU we are committed to seeing this battle through,â€ he added.

Christians said that the money raised will go towards clearing the R600,000 cost order. The union hopes to run a second phase of fundraising.

â€œWe are speechless at the local support and the global solidarity. We received donations from organisations as far as Canada and Sweden. We are confident that justice for the farmworkers will prevail,â€ he said.

To find out more about CSAAWUâ€™s campaign, go to the Indiegogo site.