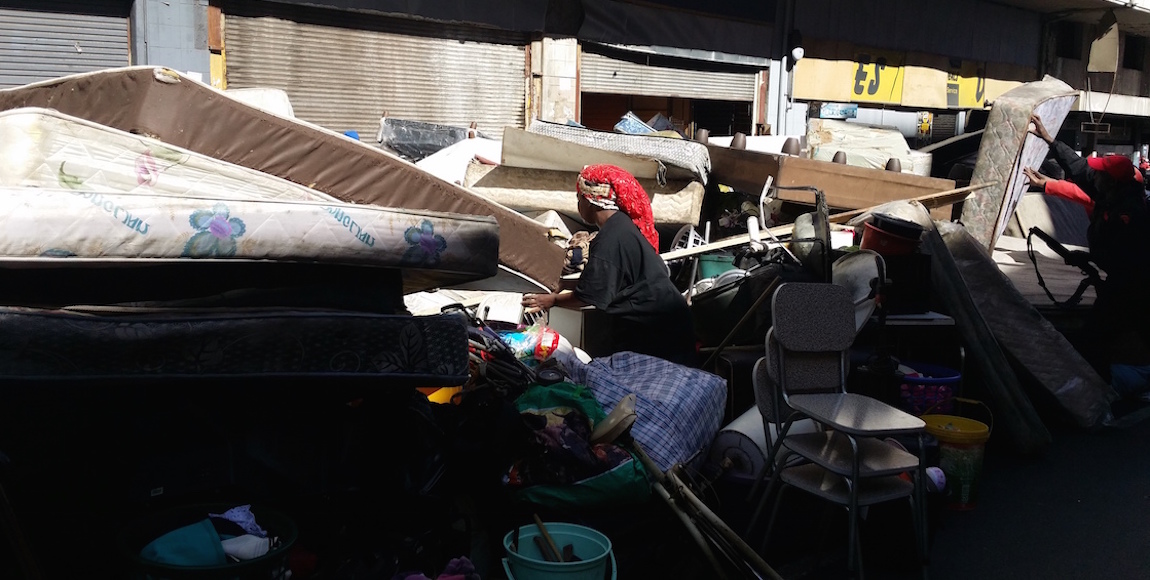 Residents of Fattis Mansions on the corner of Jeppe and Harrison Street in the Johannesburg CBD were forcefully evicted by close to 200 Red Ants on Wednesday. The eviction, which affected dozens of people, started at 7am and proceeded well into the afternoon. Residentsâ€™ belongings were pulled from the building and dumped in a massive pile along Harrison Street. â€œThey just told us late yesterday. I have been here since 2013. I have three people in my family, one is a baby,â€ said one resident as they watched their homes stripped of their belongings. The eviction notice served to residents, dated 25 April 2017, stated that the building was â€œdestroyedâ€ (an apparent reference to its dilapidated state) and that it would need to be rebuilt. All those residing within Fattis Mansions were ordered to vacate within 45 days of the court order being served. Several residents claimed they were completely unaware of the eviction plans and said the building administrator, who they paid rent to, yesterday told them that they would need to vacate the premises by this morning.

Residents said the Red Ants were unsupervised and had gotten away with assault, sexual harassment and robbery while evicting residents. â€œToday they just came around and they kicked us out. On the steps, they took my phone, money and ID. They beat us,â€ a resident said.

Another resident showed where his trousers had ripped as he tried to protect his phone from being stolen by Red Ants who forced him out of his room in the building.

One of the woman reportedly from the building is asking for her television back from the Red Ants. pic.twitter.com/26UYFrIMZz

This is not the first time that the Red Ants have been accused of theft and brutality.

The Daily Vox was unable to reach the Red Ants for comment. This story will be updated should they respond.

Johannesburg ANC councillor Nokuthula Xaba said the eviction was illegal as residents were not aware of the eviction and there was a pending court case in which the eviction was being appealed. She said that the issue of providing alternative accommodation, as is required following the Kiribilly judgment, Â was not provided for.

Joburg ANC councilor, Nokuthula Xaba is addressing the people outside the building. pic.twitter.com/K2HhY7tx8V

â€œPeopleâ€™s rights are being violated. The city of Johannesburg, where I belong as a councillor, say they donâ€™t have the capacity to provide accommodation. We have children here who are heading the families. We also have disabled children and now their human rights are so dehumanised,â€ she said.

Silu Mabilitsi, a ward councilor from ward 60, said that the eviction would be contested in court, with the Socio-Economic Rights Institute of South Africa (Seri) representing the evicted residents. The matter was set to be heard at 6pm on Wednesday.