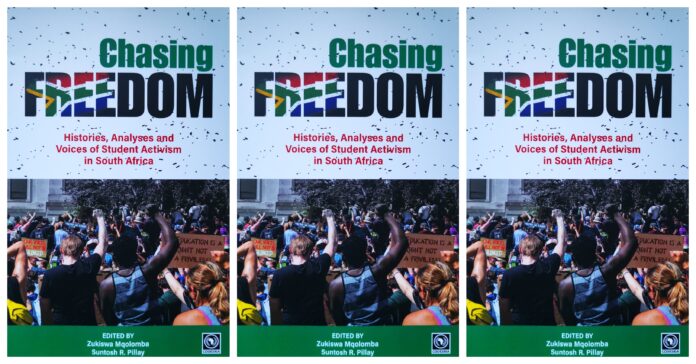 CHASING FREEDOM is a new book covering diverse histories of student movements in post-apartheid South Africa. The book takes note of the historical moment of the 1976 student uprisings and the evolution of student activism since that seminal event. The book is edited by Zukiswa Mqolomba and Suntosh R. Pillay.

In this excerpt from a new book Chasing Freedom, Ntebaleng Morake writes that about how gogo and her are raging Black women because of a country they both love, but does not love them back. [The excerpt has been published with permission from the editors]

I am permanently scarred by Fees Must Fall. The memory of rubber bullets dancing freely
from guns held dearly by Black men dressed in police regalia shooting at an unarmed mass of Black students haunts me. I am haunted by their hands aggressively touching our small bodies, packing as many of us as they could find in their vans. I am haunted by cries of young Black students, who with each rubber bullet aimed at them slowly let go of their worship of the promise of 1994. I am haunted by the reality of being Black and a woman in university spaces that consistently say that those who look like me – those who are me – are unwanted. I am haunted, that today still, in this country, young people have been kissed by walls of jail cells for standing up for what was promised to us; for standing up for unrestricted and unconditional freedom; for standing up against barriers of access to the wellbeing and success of the Black child and for standing up for free decolonial socialistic intersectional and Black- centred quality education.

I never thought I would one day run away from the police. Or that I would one day know what it feels like to have my skin carry the smell of teargas smoke. Or that I would one day see gogo break down after hearing people call me comrade thus leaving an unexplored sense of loss in me. I went home that vacation. It was 2015 and for the first time that year, I had seen the extent of my dispossession and displacement as a Black body in occupied South Africa. I had assimilated to whiteness all my life as a means of surviving white capitalist heteropatriarchy, but in 2015, I learnt that my assimilation would not save me. I was still Black. And woman. And forgotten. And erased. So my rage grew. And grew. And grew. I thought of Marikana. Of Andries Tatane. I thought of being Black at the University of Cape Town. I thought of how my body, covered in sweat from running, almost failed me on 21 October 2015.

I could have fallen, and if I did, I could have known an inside of a jail cell and my only crime would be that I was Black and I challenged an unjust and very brutal system that continues to criminalize those who dare speak out against it. I had gone home to rest my bones and to have home whisper nourishment and tenderness to my bones. I needed to heal after being in student movements that showed me how little the lives of Black people mattered in this country.

Gogo knew of my involvement in the movement from other family members; however, it only become real when she heard it rush out from my mouth. My lips parted ways and I passionately said to her, ‘gogo, I am a student leader; a comrade. The system is brutal, gogo. I want to dismantle the system! I want to dismantle the system, gogo.’ A brief silence wrapped its legs in the room and she stared at me.

‘A comrade?’ she asked while a little dam grew rapidly in her eyes; exposing to me that the word comrade triggered my grandmother.

I said yes and allowed the silence to prevail while her sadness matured from the thought of me being a comrade. She looked at me and gently said ‘I thought our generation fought so that your generation does not have to bear the scars that come with being that – a comrade.’ I smiled to sooth her very explicit heartbreak before I told gogo that the struggle never really ended. It was always there, even after 1994. She just choose to believe it ended. She did not hit back.

Usually my grandmother is very feisty, so when she kept quiet I knew that she knew that this was the truth. I also knew that racialized pain – Black pain – was something my grandmother and I have both cuddled in very similar ways. She, like me, knew the pain of knowing pain so intimately. Gogo was raging; she is raging. So am I. My gogo and I are raging Black women because of this country that we both love, but does not love us back. At least not in the right ways.

Ntebaleng Morake is a researcher, political scientist and public policy analyst. This is an excerpt of her chapter in a new book, Chasing Freedom: Histories, analyses and voices of student activism in South Africa, co-edited by Zukiswa Mqolomba and Suntosh R. Pillay (available from CODESRIA Publishers).