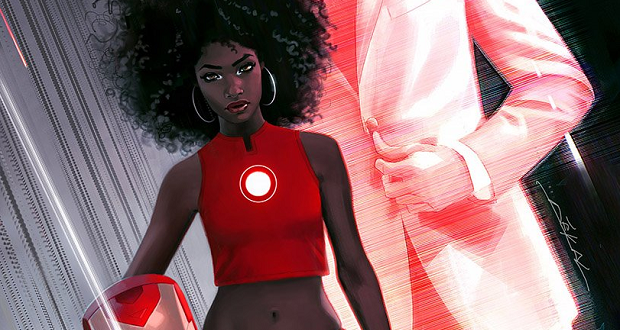 We’re all about diversity and representation in the comic book universe, so the news that a black, female teenager will be replacing Tony Stark in the Iron Man comics really got us excited. The Daily Vox team rounds up four more characters of colour you need to check out if you care about diversity in comics.

2. Tâ€™Challa, Black Panther
The first black superhero in mainstream comics is back! There is a new Black Panther comic book series written by Ta-Nehisi Coates, who is a journalist for The Atlantic. He gives Tâ€™Challa, who took a backseat to other superhero characters in the older comics, new life. In the comic, we are seeing a more developed character, who is conflicted about many things such as whether he can still be a good man and a king. Tâ€™Challa is the king of Wakanda, the mythical but technologically advanced African country. You might remember seeing the Black Panther in the recent Avengers movie, Captain America: Civil War, where he spoke Xhosa. He’s also getting his own film in 2018.

3. Gwendolyn, Saga
Saga is an epic science fiction story, which is kind of like Star Wars – but not. The story follows Alana and Marko. Alana is a soldier from a planet called Landfall, whose people have been at war with the planet Wreath for centuries. Marko is a captured soldier from the opposing planet. The two meet while she guards him in prison, they fall in love, escape and Alana has a baby while theyâ€™re on the run.

Thatâ€™s where Gwendolyn comes in, somewhere around issue #8. She is a high-ranking officer of Wreathâ€™s High Command, who is now after her ex-husband (Marko) who betrayed her people and her, by marrying a Landfallian. She is a brilliant negotiator who is capable of handling herself. She appears throughout the comic having her own adventures, such as saving a slave girl.

Im reading saga again and I just want to say nobody kills the game harder than Gwendolyn!!! pic.twitter.com/gfwdbljM5g

4. Lunella Lafayette, Moon Girl and Devil Dinosaur
This is one of the cutest and most interesting comics to come out of Marvel. Based on the comic Moon Boy and Devil Dinosaur, Lunella (Moon Girl) is a brilliant 10-year-old super genius who hasnâ€™t made it into any of the special schools, or any of the regular schools for that matter, in New York.

She is an inventor who is seeking information on the Terrigen bomb thatâ€™s mutating people, because she also has some Inhuman DNA. While investigating, she accidentally brings Devil Dinosaur from the past into the present. They then team up to form the coolest duo! The first issue came out at the end of last year so you should be able to find it at your local comic book store.

5. Kamau Kogo, Bitch Planet
In this world, if you are a woman and you are judged as being non-compliant then thereâ€™s only one place for you – Bitch Planet, a floating prison in space. The series follows Kamau Kogo, a suspected murderer who knows sheâ€™s been falsely accused. On the planet, they try to brainwash her, which doesnâ€™t work. She then gets offered a chance to participate in a violent game – almost like football but with death – in exchange for her freedom. The comic debuted in 2014 and is ongoing.

With these kickass black characters finally being depicted on the pages of comic books, is it a matter of time until they get their own movies? We’ll be here for all of it.