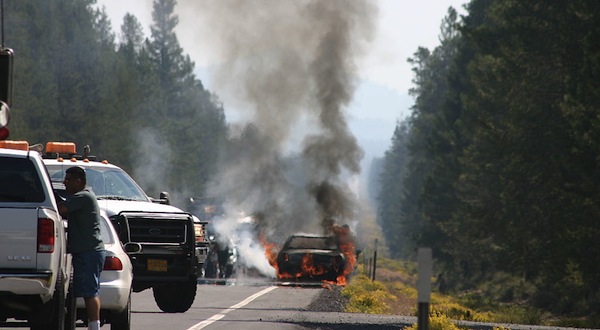 A horrific traffic accident on the N12 near AlbertonÂ on TuesdayÂ served as a reminder of just how dangerous South Africaâ€™s roads can be. So far, four people have died as a result of the fatal crash and authorities are now investigating the owners of the truck that caused the 47-car pile-up.

But there have been many other horror stories from South Africaâ€™s roads, and last year South Africa was ranked the worst country in global study on road safety.

There is predictable outrage about road deaths during Easter and the festive season each year â€“ last year 1 376 people died during the festive season alone – but little political will to address the factors that contribute to these deaths.

But the numbers do not actually differ greatly month to month – about 40 people die on South Africaâ€™s roads each day, putting the annual road death told over 14 000 each year. It also costs the economy R300-billion each year.

Yet despite the hair raising statistics and increasing awareness of the extent of the countries road deaths and injuries, road safety remains low on government and citizensâ€™ list of priorities.

One doesnâ€™t have to look back very far to find the previous â€œmost deadlyâ€ road accident in SA; such horror crashes occur with frightening regularity.

Here are five major traffic accidents that shocked South Africa, and then faded from memory. They are a disturbing reminder of how we have become inured to the daily carnage on our roads.

The shocking Pinetown crash
In September 2013, a speeding truck drove through a red light, ploughing over multiple cars, including four minibus taxis, as it sped by. The crash happened in evening peak hour traffic. The next morning, authorities confirmed that 27 people had been killed and 80 injured. The driver of the truck said that a brake failure caused the accident and is currently in court facing charges of culpable homicide.

Moloto Road collision
Moloto Road has been flagged as one of South Africaâ€™s deadliest roads. In 2013, 29 people died and 30 were injured following a collision between a bus and a truck along Molotoâ€™s stretch. The truck driver had swerved past a stationary vehicle and collided with the bus. President Zuma expressed shock at the time saying, â€œThis carnage must stopâ€ before calling on law enforcement to take action.

De Doorns mountainside crash
De Doorns is typically remembered for farming strikes, but in March last year a driver lost control of a double-decker which careened down the road before crashing into the mountain. People inside the bus had just attended a church service when the crash happened. At the time, it was called one of the worst crashes in South African history and 24 people were killed. Brake failure was cited as the main reason for the crash.

Minibus taxi overturns
In this surveillance footage a taxi careens off the road and overturns before falling on its side. Taxi accidents are rife in South Africa with many vehicles not adequately tested for road-worthiness and drivers been accused of illegally obtaining licenses. The video above shows that road accidents are not just a risk to people trapped in cars, but also to pedestrians around the scene.Â h

Holiday season crash campaign
During the 2011 festive season, the Western Cape launched a video campaign as part of its Safely Home initiative to urge road users to be alert while driving. The videos contained CCTV surveillance footage of real traffic accidents.Â  Although trucks and minibus taxis are often believed to be the worst road offenders, ordinary vehicles experience their share of horrific crashes, and drunk driving is implicated in a huge proportion of our road accidents.