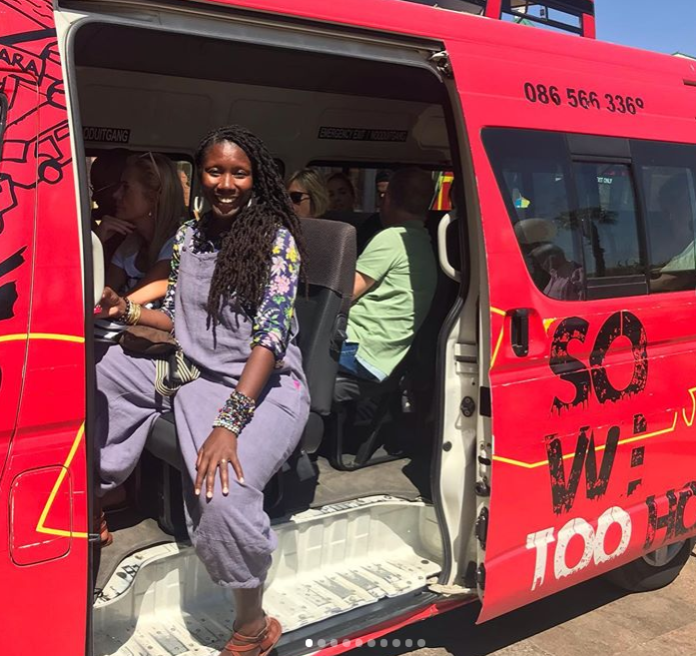 “What do we lose when we choose ourselves, especially as women?” asks Jamaican author Nicole Dennis-Benn. The Daily Vox spoke with Dennis-Benn during her visit to South Africa early in September. The author had been in the country for the Open Book Festival in Cape Town and for a book launch in Johannesburg. Her latest novel Patsy, about a woman who leaves her daughter behind in Jamaica to pursue love and opportunity in America,  has received international acclaim. The book explores themes of motherhood and intersectional identities.

That week, South African news was devastating. News that a post office employee had raped and murdered 19-year-old university student Uyinene Mrwetyana had caused an eruption of protests against gender-based violence and femicide. At the same time, there had been a series of extremely violent xenophobic attacks on Africans living in South Africa. It’s during this time that we sat down for coffee with Dennis-Benn, who was contemplating the socio-political climate in South Africa. Here are five things from our chat with Dennis-Benn.

“My march is in my words”

I feel like the timing of my visit was definitely right during this dark period. Being here and hearing about the xenophobia and gender-based violence against women made me reflect on the fact that my fiction explores these themes. But what’s happening to girls and women and immigrants around me here in South Africa, or in America or in Jamaica, isn’t fiction. I write to make sense of the world; but most importantly, I write to ask questions, answer them, dismantle preconceived notions and shed light on issues people don’t necessarily want to talk about.

With that said, I really commend South African citizens for marching in the streets for girls and women’s’ lives. I had never seen such a thing for us. No one usually cries for the black girl or black woman. Not even in Jamaica, where I was born and raised, and where the same amount of violence is happening to our girls and women. In America, we have Black Lives Matter, but it took a long time for folks to march for black women too. In South Africa, something revolutionary is happening. This outcry for black women’s lives is electrifying.

I was on panels at Open Book Festival during the time when people were marching in the streets. If I wasn’t on panels, I’d probably be marching as well. But then I remembered that my march is in my words. That’s how I protest. Toni Morrison once said, ‘I get angry about things, then go on and work.’

How is motherhood linked to womanhood?

As women in society we are socialized to aspire to motherhood. No matter where we are from and who we are, we were taught that the epitome of womanhood is motherhood. The first thing we are given as girls are dolls. In my new novel, Patsy, I wanted to question what it means to be a woman, but more specifically, what it means to be a woman who doesn’t desire the role of motherhood and dares to escape it. My protagonist Patsy abandoned her five-year-old daughter, Tru, in Jamaica to purse better opportunities in America and to love the way she wants to love. It took me a while to wrap my mind around that because, being a woman myself, I had a lot of moments where I was like, ‘Oh my goodness, what’s my character about to do?’ But then I had to embrace her and empathise with her and love her. Patsy, who is a working-class Jamaican woman, had never been given a choice. Abortion is illegal in Jamaica and therefore, a young mother like Patsy had no choice but to step into a role she wasn’t prepared for or ever wanted. Also, she was never given the opportunity to explore her own identity.

Many women are not given choices to begin with, but because of how society polices us and our bodies, we never have the courage to say whether we want to be mothers or not. Though Patsy made an unpopular decision to walk away, her story makes us question what we lose or gain when we choose ourselves, especially as women.

Writing characters with multiple identities – to use a fancy word, intersectionality – is so important. I have all these intersectional identities, so it’s natural that these will pour into my characters. I know what it’s like to be a black, working-class Jamaican, immigrant, lesbian, and woman. I usually focus on Jamaican working-class women on the page because we are often marginalised. People are quick to talk about homophobia, but not about the sexualization of our young black girls. Patsy is not only marginalised as an undocumented immigrant in America. She is marginalized as a dark-skin working-class woman in Jamaica.

In addition to being ostracized as an undocumented immigrant in America and as a working-class woman back home in Jamaica, Patsy is also marginalized within her gender, existing as a woman who doesn’t desire motherhood.

In terms of sexuality, you can’t pinpoint Patsy’s sexuality. My characters wouldn’t have such language. For example, growing up in the Caribbean, I was raised by women who would be describe as feminists. They stood up for themselves and did things that men were expected to do; but those women would never call themselves feminists. Labeling sexuality is the same thing. Patsy, like Margot in my first novel, Here Comes the Sun, are obviously attracted to women, but would never say, ‘Oh, I’m a lesbian’. When I’m writing these individuals on the page, it’s impossible for me to have them mentally acknowledge how they would be defined by the gaze of Western readers or people who are inclined to put them in that box.

The journey to becoming a storyteller

Growing up, I was a big fan of Sweet Valley High and the Babysitters Club. I would devour those books, as soon as one was done, I’d be at the library. My mother saw that I loved them so she would go to the bookstore and bring me new books and that was the best gift ever. Those were the stories I was reading. By the time I started writing my own stories, I was writing girls with blonde hair and blue eyes because that was all I knew in terms of how to tell stories. They all had picket fences and there was snow on the ground. Jamaica doesn’t even have snow but I thought, ‘Why not?’ I realised quite early that what we read can actually influence how we see ourselves.

I discovered Toni Morrison’s Beloved on a table inside the library of my high school. It was so refreshing to see a black woman on the back cover. It was the first time I had ever seen a black writer, much less a black woman writer, so I took it. I still have it to this day. Even though I didn’t really understand Beloved at the time until I read it again in grad school, I’m so happy that I found it.

As a writer, I’m always inspired by something. One of my best writing processes is being out and about and sitting in coffee shops like this one or on the subway in New York City. People are an inspiration. By the time I get to my computer, I can pinpoint somebody who moved me so much that I want to write a story. That’s how Patsy became a book. I had an image of a woman—a nanny on her way to her job on the Upper West Side or East Side of Manhattan—riding the subway with me during my early morning commutes to teach. I see these women everyday—the ones pushing strollers with white babies; but I never knew their stories, their interior lives. I always wondered what was going on in their heads as they nurtured other people’s children, especially when their own children were back home in the countries they left behind.

More women are owning our own narratives

It’s imperative that marginalized groups own our narratives. Zora Neale Hurston once said, ‘If you don’t express your pain, they will kill you and say you enjoyed it.’  More women are realising that we can own our narratives. We are beginning to realise that shame and silence won’t protect us. Growing up in Jamaica, I thought I had no voice. I used to resent the fact that a lot of the writers writing about Jamaica and Jamaicans were British white men observing us from afar and writing our stories. I know it happens globally, that people are writing other people’s stories. It wasn’t until I left Jamaica that I started reading writers like Audre Lorde, James Baldwin, Alice Walker, and Zora Neale Hurston, in addition to Toni Morrison, that I gained the courage to own my own narrative and our untold stories.

Author’s note: This interview has been edited to better reflect Dennis-Benn’s thoughts.