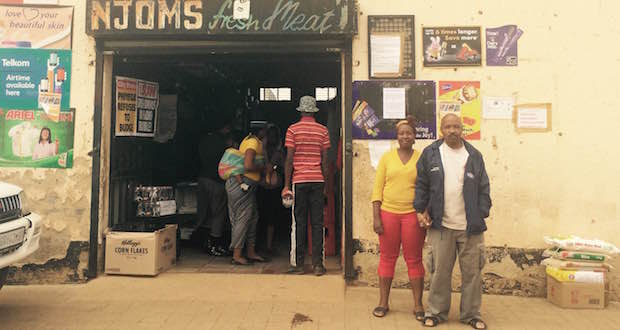 Last weekend, about 500 local shop owners and community members marched to the local police station in Snake Park, Soweto, to show their dissatisfaction with the presence of foreign shops in the neighbourhood, and the government’s lack of protection for local businesses. SIBUSISO MHLONGO, the chairperson of the Thulani Business Forum, spoke to Lindokuhle Nzuza about the shop owners’ concerns.

We South African shop owners are seen as xenophobic, but that is not true, foreigners have always been here. Our only problem is the way the government is handling their stay in the township.

We want the government to regulate their stay here. Take for instance, my shop. It’s surrounded by four foreign shops. We don’t want them to leave the township, but there needs to be regulation; to regulate this maybe we could have one shop per block.

A common example is the way the PSL regulates their teams. Previously they noticed that a certain club has eight foreign players and only three South African players in the team. When national teams play against each other our squad suffers. This doesn’t mean the PSL is xenophobic, but they are regulating the teams – creating opportunities for South African players.

We have many challenges. Foreign businessmen looking for rental properties target desperate women – old women are easily attracted by the money they might receive for property rental every month.

There’s an incident where a lady from the next street signed documents thinking that she is signing a lease, but it was a rent-to-buy agreement. We recently found out that they are attending court as the foreign owners have taken ownership of the house.

It’s not true that foreign shop owners are cheaper than local shop owners. The difference between our prices is about a rand; people won’t go buy there just to save a rand.

Another myth is that these people buy in bulk it’s not true. The thing that makes one think they are buying in bulk is because they have one owner and he buys all the goods and distributes to his shops. Some foreign shop owners come to my shop to stock up on goods.

We are not fighting with foreign shop owners – the government is the one putting us against each other. It was wrong for the government to allow them to do as they please in the township.

The march on Saturday was aimed at the provincial government especially the MEC for economic development. We have several demands: we want land, funding, and the protection of small business among other things.

Minister Lindiwe Zulu came here a while back and promised to send a task team, but we have a problem with that as the task team does not listen to what we have to say. Instead they tell us, which is wrong. We will be having another meeting with government soon to deal with these issues.

– As told to Lindokuhle Nzuza.

– Lindokuhle Nzuza is a freelance writer and a lover of art and books. She is passionate about Africa, gender issues and human rights.