Home As Told to From rural KZN to PhD: thereâ€™s more to Musa Manzi than being...
WhatsApp
Facebook
Twitter
Email
Print 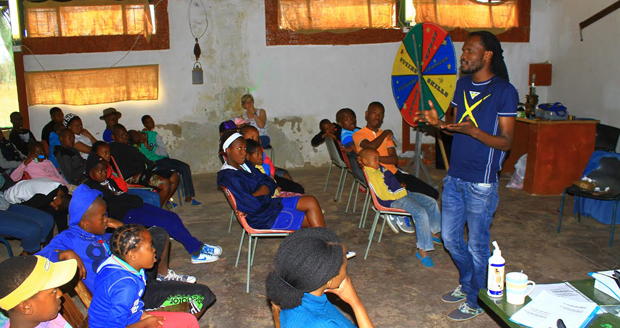 In many circles, MUSA MANZI (29) is known as the first black South African to obtain a PhD in Geophysics, but there is more to the man than just his impressive academic record. Manzi moonlights as a motivational speaker and is actively engaged in his community. He told Pontsho Pilane about his journey.

I grew up in KwaZulu Natal, in a small village called Ndwedwe, the youngest of three children. My fatherÂ died when I was only two years old, leaving my mother as a single parent. My mother was not educated and so the little she gave us was all we had. When I got to high school I wanted to do maths and physical science â€“ subjects that I had never done before because the schools in our area didnâ€™t offer them. My school didnâ€™t have a maths or physics teacher. I told our principal that five other learners and I were interested in doing maths and physics but heÂ said there weren’t any resources to hire aÂ teacher. That’s when I decided to learn maths and physics by myself and then teach my classmates.

Our principal helped by buying us study guides and our teachers would randomly select questions from the textbook and past papers for tests and exams. In Grade 11 and 12 we wrote national papers.

For matric, I obtained 100% in higher-grade maths and 98% in higher-grade physics. I also got distinctions in all my subjects. Although I always wanted to go to university, I hadn’t applied. I was soÂ preoccupied withÂ teaching myself and my classmates, I just hadn’t gotten round to it.Â But I had different universities calling me. Almost every university offered me a space â€“ except the one I wanted to go to; Wits had not contacted me. So I decided to turn down all the other opportunities and make my way to Johannesburg.

Turning down opportunities was not easy, especially when you have nothing, but I knew what I wanted â€“ I was willing to take the risk. I asked my mother for R100 to come to Wits. It was hard for her to give me that money, because we didnâ€™t have much. I bought a bus ticket to Johannesburg and arrived at Wits just as it was about to close. I was told there was no space and they couldnâ€™t help me because I hadnâ€™t applied. I showed them my marks and they said I should come back tomorrow.

I was in Johannesburg â€“ a foreign place. I didnâ€™t know where I would sleep, what I would eat â€“ all I wanted was to be a student at Wits. In the end a got offered a place, and IÂ chose to study a Bachelor of Science, majoring in maths, physics and computer science.

But then things came crashing down. I lost my mother and sister a day apart from each other during my final-year exams. It was heart-breaking but I had to keep pushing. The one thing I regret is not telling my mother how much I loved her and how grateful I was for all her sacrifices. I always said to myself that I would show her I loved her when I graduate and started working. But that day never came. My motherâ€™s death taught me that material things have nothing to do with love.

My sister left behind two daughters; they were four and seven at the time of her death, and I became their guardian. It wasnâ€™t easy being a student and a parent at the same time. On many occasions my nieces and I slept in libraries and classrooms at Wits. We would bathe in the toilets. Sometimes I would be angry about having so much responsibility, but they are the only family I have left. Looking back, I wouldnâ€™t change my decision. They are 14 and 17 now, and they are my life.

Getting a job could have been an easy way out of my situation, but I knew what I loved and I kept doing it. I love geophysics, I love young people, and I love helping people. I was always sure of that and I choose to pursue that instead of money. When I obtained my PhD, I became the first black South African to do so in Geophysics. It was amazing, but more than anything I love my job as a lecturer. I get to see students come to Wits knowing nothing and leaving with degrees. I also get to help needy students, because I was one and I know how it feels. It makes a world of a difference to be taught by someone who has the same colour skin as you, who speaks like you, and who knows what it is to be poor. I have met many students like this and I want to help them. Representation truly matters.

I have ended up travelling the world and motivating top businessmen and -women. As a motivational speaker, I could easily charge thousands of rands to give a talk, but I donâ€™t. If I start charging the big corporates, I will always choose money over purpose and I wouldnâ€™t speak in the townships or rural areas where itâ€™s needed the most. I have been tutoring in Alexandra since 2007 and I will keep on doing it.

I turn 30 this year and itâ€™s a big deal for me: I want to do even greater things. I am in the process of building an orphanage in Durban. We want to house theÂ kids, feed them and put them through school. I want to leave behind better conditions than I had.

– As told to Pontsho Pilane
– All images: supplied.