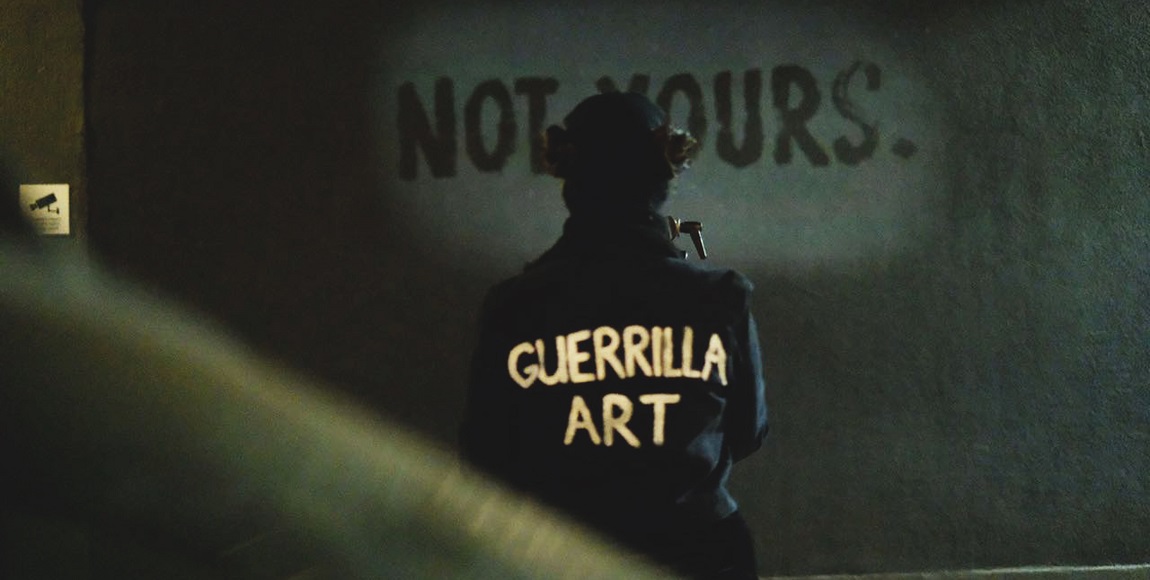 The Daily Vox spoke to Her Shadow, the self-taught animator and guerrilla performance artist who disrupted the streets of Braamfontein last week. The performance was a protest against the violence women experience every day on the streets of Johannesburg. The message was to reclaim the streets. We found out more about the Her Shadow Was Here collective, what protest art is, and why she wears a mask. What is the Her Shadow Was Here collective about?

Gender violence has always, throughout history, been a huge problem. The dialogue around it is growing now and thatâ€™s really important. This is a project Iâ€™ve been working on for about a year. When the hashtag #MenAreTrash came around and people started speaking about it more feverishly, I decided it had to be a project that is active, out there and moving. Slowly people were coming on board and wanting to be part of the project, to have their voice heard, document the project, or help, or just be at the performances which is great. If this project gives women a platform to speak on, I think itâ€™s doing its job.

You posted a call on Twitter asking women to send you their shadow. Why is it important for you to get broad engagement?

Would you like your shadow to be part of the movement? Send Her Shadow a message!#followhershadow #guerrilla #takebackthestreets pic.twitter.com/AbGgGiRJYA

The main thing for that Twitter call was to have women who are not in my circles, everyday women, speak to me.

What does a Her Shadow Was Here performance entail?

I animate the footage that people send me and it becomes one of the shadows that I project in the city. Through these shadows and this performance, we invade spaces and then reclaim them as our own.

The first performance took place on the 1st of June, in Braamfontein. It went way better than I thought it would. I was kind of worried that I would be arrested by someone or someone would tell me to go away. In fact, a whole lot of people saw it and started joining the group, asking questions about it, and that creation of dialogue was important. A lot of people turned their head twice. It went pretty well.

Weâ€™re hoping to do several more performances throughout the next three months. The next one should be on the 17th. Weâ€™re doing it in Maboneng, but weâ€™re hoping to spread from the CBD to suburbs and various places in Joburg. Is there a particular reason behind the locations you choose?

Weâ€™re in Braamfontein because gender violence has been happening in areas like that. Weâ€™re trying to reclaim those spaces by pointing out that they should be spaces that women can walk and exist in without fear.

Why the guerrilla style performance on the street instead of a traditional space like an art gallery?

We donâ€™t get permission from anyone to do it, thatâ€™s why itâ€™s a guerrilla performance. Just as gender violence happens without permission, so the performances happen against the system.

A big thing was for the work to never be in a gallery space because these incidents happen on the street, so thatâ€™s the space we wanted to reclaim. It needs to be art that everyone sees; everyday people. Itâ€™s more jarring when itâ€™s outside and not in places you would expect it to be.

Why use art to protest?

All forms of protest are valid but artists need to be activists too. Various platforms need to speak about gender violence. Art engages the public in another way because instead of just a regular march you see images on a wall or music. Why is it important for you to remain anonymous?

Itâ€™s not for us to say who we represent. We want to not just represent every woman but be a platform on which women can have a voice. Iâ€™ve decided to keep my identity anonymous because I donâ€™t want the work to be about me as an artist. I want it to be about all the women that I know or donâ€™t know who want to speak about it, or want to feel safe in an environment they donâ€™t feel safe in. Being anonymous is important because it shouldnâ€™t be about people with certain powers. As the movement grows, weâ€™ll see who decides to add their voice to the campaign and I hope that people with influence do join. I have some artists Iâ€™m collaborating with to photograph the work and who want to join the performance. If they donâ€™t want to be anonymous, thatâ€™s fine.

I think the mystery is also part of the drive for the work. Thereâ€™s this kind of heroic aspect to it and itâ€™s a reminder that all women can become their own heroes and that we have to empower each other. Iâ€™m not important in this. Itâ€™s about Her Shadow.

Details of her next performance will be released on twitter @followhershadow. Her Shadow Was Here invites everyone to join in occupying spaces to stand up against gender-based violence.