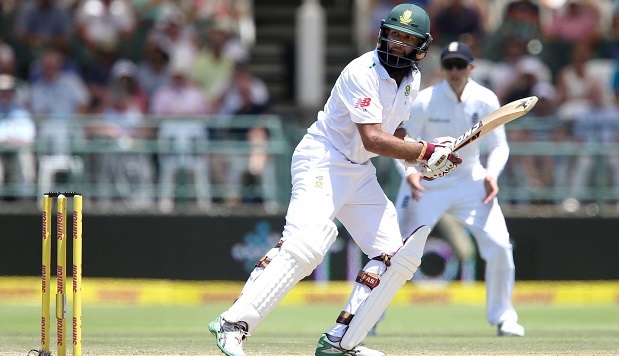 Soon after he hit his stride on the pitch and became a household name, supporters of Hashim Amla appeared at stadiums sporting fake beards and dubbing themselves The Amla Army. The fervent support Amla has received has shown what a prolific player he is. Now, Amla’s fans and fellow players alike have another milestone to celebrate. On 12 January 2017, Amla will play his 100th Test match when the Proteas take on Sri Lanka at The Wanderers in Johannesburg. The Daily Vox team rounds up some of the most unforgettable moments from The Mighty Hash’s career.

He’s a helluva wristy player, but he’s got a back-foot punch that he hits consistently. Not many players can do that consistently. Also he’s a very good player of spin. – Former Proteas allrounder, Jacques Kallis on what makes Amla so good

First of all, Amla is only the eighth South African player to reach this milestone. Having made his Test debut in 2004 against India, he sure has had an interesting journey to 100 Test caps. That in itself is something to be celebrated. Other notable names on the list include legends such Kallis, Mark Boucher, Graeme Smith, Shaun Pollock, Makhaya Ntini, Gary Kirsten, and – most recently – AB De Villiers. Amla might be joining an illustrious group of players, but he can certainly hold his own, evident in him being the only South African to have scored a triple century in a Test, which he did at one of cricket’s most esteemed grounds, The Oval, in England.

I’m not a big one for statistics. I never really cared too much about statistics when I played. It was more the way you played and the way you helped your team have success. Hash has certainly done that for South Africa over a long period of time. But if you look at his statistics, it shows how great a player he is. More importantly, he’s a lovely man. On behalf of all of Australia, I’d like to congratulate him on playing 100 Test matches.” – Former Australian captain, Michael Clarke

Amla’s calm demeanour reflects in the way he plays, and in his character.

So I think that sort of calmness that surrounds him a) makes him the wonderful cricketer he is but b) makes him such a nice guy off the pitch it’s a huge honour for any player and Hashim deserves every plaudit he gets.” – England cricketer, Stuart Broad

However, Amla’s career has not just been about landmark achievements on the field. He is also an exceptional human being off the pitch, which shone when he led the charge in support of Faf Du Plessis, after Du Plessis was accused of ball tampering. Even though Du Plessis was found guilty, many former and current Proteas players came out in support of him including Amla. Amla represented the players at a press conference that was held to show their solidarity.

Amla said to the press: “The reason everybody is here is to stand together and to show solidarity to what has been something we actually thought was a joke. It’s not April. But the allegations against Faf were really, for us, a ridiculous thing and as a team we are standing strong. For us it is basically a joke. The boys are here, standing strong.”

And Amla knows a joke when he sees one, according to Faf.

He’s a very very quiet guy but something you don’t know of Hashim is he actually has a really good sense of humour. He’s always the guy who cracks the dry jokes in the team and I always say if there was a top three for the most funniest guys in the team, Hashim will make the top three. – Faf Du Plessis, Proteas Test captain

Another highlight of Amla’s career was when he captained the Proteas Test squad from 2014 to 2016. Amla replaced Smith, who stepped down mid-2014. Even though Amla’s leadership was criticised at times, the Proteas had some compelling games with him at the helm, including wins in his first three series as captain. He was also the first South African Test captain to record a win over Sri Lanka during the two-match series in 2014, which was also his first as captain. Amla stepped down as captain in January 2016, as he felt being captain was impacting negatively on his personal game.

He has sacrificed himself for the rest of the team, which speaks volumes … and people need to appreciate that type of character and it seems we sometimes undervalue that on the field. He has got a lot of experience, and expertise and advice that he can give, particularly the younger players in the side.” – Proteas coach, Russell Domingo on Amla’s reign as captain

Amla has also had to deal with a lot off the pitch. This racist and Islamophobic comments from people within the cricketing world. In 2006, an Australian commentator was caught live on television calling Hashim a “terrorist” during a Test match between Sri Lanka and the Proteas. Amla took a catch to dismiss Sri Lankan batsman, Kumar Sangakkara. The commentator Dean Jones said, “The terrorist has got another wicket.” Jones was later fired from Ten Sports for the remark.

Amla was quoted in an interview about the whole debacle saying: “It did hurt. When somebody calls you something like that you don’t say ‘Thank you!’ That’s not the thing to do. But when a guy apologises … who is to judge but the Almighty? And if it prompts another person to make an effort to find what Islam means, then a lot of prejudices will be blown away.”

In November 2016, the Proteas were playing against Australia in the second Test of the series. An attendee at the stadium wrote racist graffiti directed at Amla. The cricket fan was due to face criminal prosecution and received a three-year ban from matches across Australia. The graffiti was removed almost immediately.

Enduring it all to remain a great player

Despite the racist remarks that Amla has had to endure, he has always remained an upstanding person, choosing to not lash out, which is probably what most players would do in his situation.

Amla might not be at his best form at the moment, but his many accolades and his importance to the Proteas and South Africa as a whole trump his current performance. Getting to 100 Tests is nothing to scoff at, and this is evident by the adulation and appreciation the Mighty # has received from fans, teammates and opposition.

From The Daily Vox team, we wish Hash all the best on his 100th Test match, and hope he will be around to thrill us with his superb cricket for many years to come.