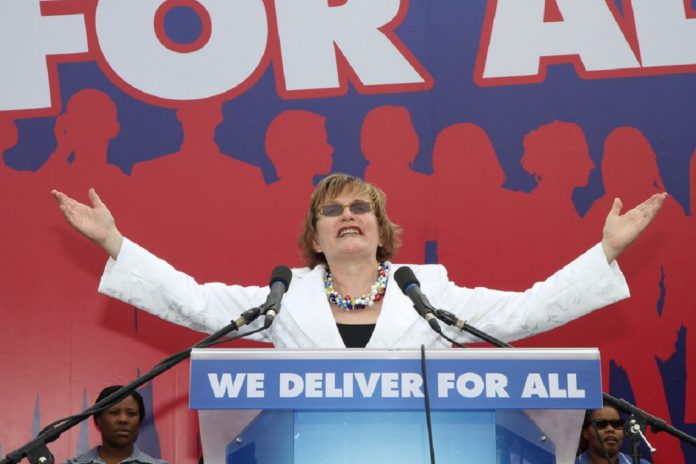 The Democratic Alliance (DA) has taken a significant knock in support for the past year. And it’s all Mmusi Aloysias Maimane’s fault. But fret not, on Sunday, the Supreme Leader, Helen Zille, will be back. The “Donald Trump of SA Twitter” is looking to make the Democratic Alliance (DA) “great again”. A whole 155 members of the DA’s federal council go to the polls on Saturday to vote for the federal council chairperson. By FATIMA MOOSA and SHAAZIA EBRAHIM.

UPDATE: Helen Zille is back in the DA. She was elected Federal Council chair on Sunday.

We know most South Africans are confused about the political structuring of the main opposition party. Don’t worry, we’re with you. But we’ve got you covered with a little breakdown:

The party will be voting for the federal council chairperson. The council is the DA’s highest decision-making body. The chairperson’s seat is vacant after James Selfe stepped down. Selfe was redeployed after the disastrous 2019 elections, remember those elections? (yes, South Africans did go to the polls in 2019, even if it feels like many years ago) Basically, it’s an internal election that, for some reason, the party wants to make all of our business.

They were even contemplating having a live debate amongst the candidates. Last time we checked, we’re in South Africa and public debates were not a thing. And that’s probably for the best looking at the mess of the debates happening in America right.

Anyway with the position open, qwhite a few DA members came out of the woodwork to compete.

No match for Helen: Who’s running for federal council?

The former Nelson Mandela Bay Mayor Athol Trollip is no match for the Supreme Leader. He served as a member of the provincial legislature (MPL) in the Eastern Cape (EC) in 1999, serving two terms. Then he was elected to the National Assembly in 2009 until 2012 when he went back to the Eastern Cape as MPL.

Then he became mayor of Nelson Mandela Bay in 2016 until he was ousted in a motion of no confidence in 2018. If there had no confidence in him as mayor, there’s no way he can beat Mama Zille for federal council chair! Trollip is currently the head of the federal congress in the party.

Also in the running is Mike Waters. Waters is the DA’s deputy chief whip of the DA. He cut his teeth as a youth leader and has been with the party for over 30 years. Waters has been around in the DA as an MP in 2004, 2009 and again in 2014. He is one of three deputies in the federal executive. But he’s mostly irrelevant.

This brings us to the best and most qualified candidate guaranteed to bring back “the old DA”:

Otta Helene Maree aka Helen Zille. Helen is an OG in the game. As a former party chair and Western Cape Premier she has all the experience needed to take up the mighty federal council chair.  Helen held the position of party leader from 2009 to 2015, Western Cape mayor between 2006 and 2009. Zille was premier from 2009 until 2019. Talk about qualifications!

That doesn’t even mention that time she gave South Africa a history lesson about the benefits of colonialism. Stan!

What’s in a report?

Another important event happening in DA world this weekend is the release of this report into the party’s dismal results in the elections. Even without seeing the report, we already have a few ideas.

Let’s see: could it have been the future chair’s interesting tweets (you know those ones) or the fact that the DA couldn’t decide on its identity? They keep trying to tell us they’re social democrats with some liberal components but we’re not sure if they even know what that means. Also they were trying to tell us they’re a non-racialist party when everyone but the DA knows the Rainbow Nation is dead.

Or maybe it’s the factionalism within the party. Those rifts became very evident during this year’s election, even though the DA denied that Maimane’s job was on the line. As Maimane says, it’s a conflict between colleagues in the party who are against diversity and want to reclaim “the old DA”.

This report, compiled by former party leader Tony Leon (one of the “old guard”), is apparently going to suggest that Maimane should take one for the team and step down. Shem, the man has been through a lot these past few months. And who can forget that heartbroken look on his face when he addressed the media after this year’s elections? Or the accusations that he continued to use a car sponsored by disgraced former Steinhoff CEO Markus Jooste, even following the expose of the company’s fraud scandal?

This weekend is going to be tough for Maimane. The DA leader is about to face a whole lot of “I told you so” from South Africans.

But who knows… maybe his grand mission to implode the party from within will finally come to fruition.